The next single from “Architecture + Morality” was picked up several years after the fact. I believe I got it at a record show somewhere, during the mid-80s, but I don’t remember it being out of town. I seem to recall record shows finally hitting Orlando in the early-mid 90s. In either case, I was in the process of “building the collection.” I had been buying all OMD singles since 1983, and getting the earlier singles took me a few years of backtracking for them. 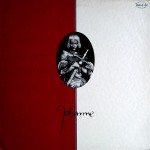 “Joan Of Arc” on 12″ single had a non-extended A-side and a single B-side, “The Romance Of The Telescope [unfinished].” Technically, no different in terms of content to the 7″ single, but with much greater fidelity. Peter Saville’s cover typography of “Joanne” was taken directly from a letter from prison the teenaged martyr had written. The subtly textured sleeve gave it a suitable medieval air. I distinctly remember where I first heard the B-side. I had bought issue 4 of “SFX,” the C-60 UK music “magazine” in part because it had interviews with OMD as well as The Human League and Steve Strange of Visage on it.DuringJanuary of 1982, that was [and still is] profound Monk-bait. The OMD interview had an excerpt of “The Romance Of The Telescope [unfinished]” on it amid their interview and I was fascinated by this unknown song, neither on my UK pressing of “Architecture + Morality” nor any of the singles in my burgeoning Record Cell at the time.

It remained for a few years until I grabbed this 12″ single that I finally heard the song that had been haunting me since early 1982. The sound was very congruent with that on “Architecture + Morality.” Stark bass drum with long, wet, handclaps. The all important choral mellotron, and capped off with military snare drumming. McCluskey certainly was going through a period of military drumming all over OMD records. The lead synths sounded like mournful, slightly detuned car horns and would figure in their sound going forward for a year or two. It certainly prefigured the “Dazzle Ships” sound in that regard.

Since it was labelled “unfinished” I assumed that we might heard it “finished” one day. Imagine my surprise when it appeared on their next album in a slightly remixed form. As the band thought at the time, it was just a quickly recorded B-side; done in a single day. I imagine they were reticent to issue it but they needed a B-side for their new single and they could always “finish” it later. We know how that worked out. To this day Paul Humphreys considers it on of the best OMD songs ever. How could he not? McCluskey’s vocals were tender and enveloping even as the lyrics [“see these arms that were broken, how they held you so…”] hinted at catastrophic pain and suffering. The stark, cold militarism of the music bed played well with the lyrics but the singing was intriguingly opposite of the bold, if fatalistic, vibe the song had.

The second “Joan Of Arc” 12″ single, a.k.a. “Maid Of Orleans,” had two B-sides.  The first was “Of All The Things We’ve Made” and like “The Romance Of The Telescope,” it also figured on their next album, but unlike the latter, was not included on this album. Instead, the B-side album took it’s name from the track “Navigation.” The cut had much of the sonic solidarity that this entire period engaged in. The “three M’s.” Mellotron. Martial drumming. Heightened Melodrama. The subtle rhythm box samba soon gave way to bold, cinematic chords on the Mellotron.

McCluskey’s vocals were the wildcard here with them dubbed out in long-delay echoes that rendered them almost unintelligible. There was a skittering, almost insectoid chittering underlying the track and then the dramatic melody took its leave in the coda fadeout, the underlying “base coat” of the song was left to become primary. The anxiety-provoking drone was actually from a mid-70s cassette of electronic noise experiments that the duo had made under the name VCLXI; predating even their days as a “proper band” as The Id. Why did they not do more of this archaeological excavation? The complexity and scope of this B-side marked it as another of their unbeatable run of B-side material that I would cite as the band’s acme.

The two year wait between the spring of ’81 and the next OMD single seemed long at the time, but we were just young whelps. “Genetic Engineering” came on 7″ and 12″ with a single B-side, “4-Neu.” While it was a tribute to Krautrock influence Neu! I did not hear the band until decades later! Shocking. And even now, I consider “Hallogallo” as the iconic [motorik] sound of Neu!, not the delicate piano ballad on offer here, which suggests to these ears more of a Harold Budd influence. The delicate, whispered vocals were so slight, that they could have been either Andy or Paul performing. The recurring mechanical rhythm that periodically figured here was a fascinating, dissonant element in the otherwise clam, placid mix.

The next B-side was from “Telegraph.” “66 And fading” was a subtle, wispy instrumental of 6:20 length on 12″ and if you bought the 7″ of “Telegraph,” you were treated to an additional ten more seconds on this already seriously long piece. The string patches and what sounded like horn drones were actually the chords to the “Dazzle Ships” song “Silent Running” played backwards and slowed down. Brilliant! A process-driven B-side. That made perfect sense with McCluskey admitting to writer’s block around this time. Eno would be proud. With this song, the classic, Imperial Period of OMD B-sides [much like the band itself] came to an end. When they reconvened in 1984 changes were afoot.

Next: …An OMD Sea Change

15 Responses to Rock GPA: Orchestral Manoeuvres In The Dark [part 47]