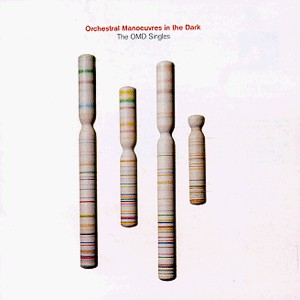 The cover is the most interesting thing here

In 1998, after OMD [mk II] had crashed and burned and concurrent with McCluskey’s ventures into manufactured music; Virgin records still required more blood. Another greatest hits album was quickly mooted. Andy McCluskey liked the idea of including an album of remixes with it to add interest. The resulting “The OMD Singles” does not reside in my Record Cell as I found it an inferior re-make of the 1988 “Best Of OMD” album, which at least had some rare versions on its behalf. Ten years later and the track listing was almost the same basic run of singles through 1988, minus a few highlights, plus one single from each of the three Andy/OMD albums made this a very missable proposition.

Fortunately, the remix album fell through, because judging on the mind-shredding horror of the EP of remixes that crept out of the studio. These were late 90s remixes… with all of the gravity that implies. I did not buy the EP at the time of release. A few years later and when I was cleaning up loose OMD ends [CD singles with live tracks]  for a planned BSOG, I figured I might as well hear these things. Sigh. It’s the curator in me that sometimes makes me sometimes do ill-conceived things.

There were three tracks: “Enola Gay [OMD vs Sash!],” “Souvenir [Moby remix],” and “Electricity [The Micronauts remix].” The first was a raved up version of “Enola Gay.” Missable. The second was Moby’s blanded down version of an absolute OMD classic to its detriment. Moby has never heard an incredible rhythm track that he wouldn’t prefer to replace with the week old dead fish he calls a rhythm track! <spits on ground in disgust> On the positive side, Paul’s singing was vastly improved here, since it was basically Moby’s weak cover of “Souvenir” with new vocals by Paul. Points [a few] for Paul’s singing.

Then there was “Electricity [The Micronauts remix].” Words cannot convey the blunt-axe-in-face effect of this so-called remix of their debut single. The dope must have been copiously flowing in the Micronauts’ studio that week, because the resulting mix bears virtually no relation, not only to the song was all know and love, but to the very concept of music itself! Hearing it can quickly make me feel ill. It is a sonic attack on any living creature. Kate Bush to the white courtesy phone, because here’s your “Experiment 4!” They might have sampled a Selmer Pianotron note in the song but they filled the pot with arrhythmic sonic vomit and left it outside to fester for a few weeks before pressing its corrosive waveforms into wax and unleashing it on the waiting world. 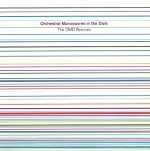 Thank goodness I bought the promo CD of this, so I got the four minute edit of this atrocity.  Not so luckily, because of the collector’s sickness within me, I also bought the UK promo 2×12″ of this life-threatening release. There was an Apollo 440 mix of “Apollo XI” as well which appeared nowhere else. I also had the extended version of “Enola Gay [OMD vs Sash! remix],” three further, different [inferior] Moby remixes of “Souvenir,” and the blunt-axe-in-face horror of the 8:44 version of The Micronauts remix, which can probably be said to violate The Geneva Convention if used on the battlefield.

When I heard these in the year 2000, they made being an OMD fan feel like some kind of punishment. 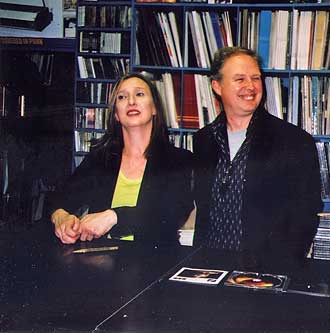 By 1999, Claudia Brücken and Paul Humphreys were a team

Fortunately, there was something more hopeful on the horizon. I somehow caught wind of the notion that Paul Humphreys was touring America that summer along with… Claudia Brücken?! People from my favorite bands playing OMD and Propaganda tunes on a US tour? How did this happen? Ironically, it was US promoters hot to make a dollar who contacted Andy McCluskey and asked him to tour America and play OMD songs for paying customers. Presumably, they felt that this would be a thing. McCluskey declined [he had his hands full with Atomic Kitten by then] but he told the promoters that they might ask Paul instead. Paul was initially resistant to the notion, but came to see it as maybe something he should try.

He had been re-introduced to Claudia Brücken in the mid 90s when a label that wanted to sign Claudia suggested Humphreys as a co-writer. Presumably, they were a couple from at least somewhere by the late 90s, though I was not aware of this for many years. Humphreys thought that alone, he would be able to perform some, but not all of OMD’s catalog for this proposed tour. If he could bring Claudia along for some of her songs, it would make for a good package. I know I would have gone! As it was, of course the tour came nowhere within earshot of Central Florida. I told a friend in Chicago about it as they were coming there, but I’m not sure if he went. I had to admit that two people from two of my favorite bands collaborating together in any aspect was intriguing to me. I wondered what the fruits of their musical efforts might sound like but I had several long years to wait for that, which we’ll discuss in due time. In the interim, Virgin was demanding more blood, but this time the path taken could not have been better.

Next: …Saved by The Archives

28 Responses to Rock GPA: Orchestral Manoeuvres In The Dark [part 43]