I can’t believe over 1500 post into this blog and this is the first time I’ve mentioned Jonathan Richman. Well, I did mention him here, but that’s hardly a 50 post thread, is it? When it came to the nascent punk/new wave phase that hit me in the late 70s, Jonathan Richman was always discussed, never heard. It wasn’t until label mate Greg Kihn covered “Roadrunner” in 1979 that I finally heard one of his songs, but it was a corker. It sounded like an absolute hit to me though it did nothing for Kihn at the time. And then… for 15 years… crickets. Even so, I would read interesting things about Richman and his dramatic volte face following the breakup of The Modern Lovers where after being perhaps the first US act to bear the influence of The Velvet Underground, he took a radical turn away from the darker hued material of his youth into a diametrically opposed lunge at an acoustic children’s music phase that no one would have expected.

All of this was academic to me. Mr. Richman made a habit of appearing in Orlando stages in the early 90s, and one time, I believe it was 1993-4, I decided that I needed to go see him. If a major proto-punk linchpin was appearing in town, then I reasoned I should check him out. Amazingly enough, one of my favorite local acts, The Hate Bombs, were the opener, so I was up for a gig I would have seen anyway for the opening act. What I found out was that Richman said that if the opening act was louder than him [and that’s not difficult] then he let them go on after he played, which sort of makes sense if you are committed to the sort of intimate, low-volume acoustic rock that Richman favors. The raucous garage punk Hate Bombs were much better off following him! Around this time, his signature tine “I Was Dancing In A Lesbian Bar” gained traction on the college radio station we favored.

I found his songs quirky and delightful; possessed of a unique point of view and rife with humor and wit. There were no masks used to sing these straightforward songs from the heart. With many artists, the difference between their art and their persona can be large. With Richman, it was seemingly nonexistent. I became an instant fan and proceeded to never miss a Jonathan Richman show no matter which city I lived in. When I met my wife, we took in a show in the mid/late 90s and she also became enamored of his viewpoint. Moreover, she started trolling the bins for his albums, which were a revelation. His run of albums on Neil Young’s Vapor Records were our point of entry, but we quickly amassed a large run of his albums.

I usually saw Richman at The Grey Eagle, the local club where I spend the most time. Jonathan usually comes to town every two years, but the last show I caught in 2016 was at a different venue, The Altamonte! Well, that club recently bit the dust so it was back to The Grey Eagle this time. This show was very different because for the first time in longer than I can remember, there was an opening act on the bill! Ané Diaz was a Venezuelan ex-pat by way of Athens, GA who sang folksongs from her point of origin. Seeing as how Mr. Richman has changed and adapted his guitar playing to a Spanish-influenced, near flamenco style over the years, this did not surprise me one whit. Heck, Richman has a great Spanish-language album of his own [he’s not shy about singing in Spanish during all of his concerts of the last 15 years], so yes, Ms. Diaz would probably fit the evening like a glove! 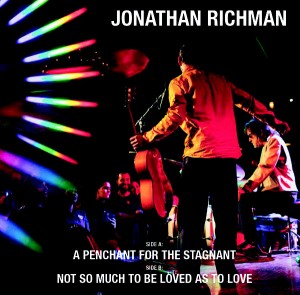 Jonathan’s newest single: “A Penchant For The Stagnant”

I arrived at the club around 8:20 with a 9:00 showtime and was gobsmacked to hand the door man my ticket only to see merch to the left in the club’s designated merch area! In the world of Jonathan Richman this never happens!! The last Richman album I bought was 2004’s “Not Soo Much To Be Loved As To Love.” Why? The local record store that reliably carried him closed soon afterward, and Richman has never sold merch at his shows! Visibly agog, I said to myself as much as his probable tour manager behind the counter “oh my gosh… merch,” at which point she smiled knowingly.  I can only surmise that Richman has new business people in place since between having an opening act and selling his music at the show represented something of a paradigm shift to his live performance methodologies. Alas, since that was never previously there, I did not budget to buy anything this time.

I might point out that since his Vapor Records run ended in 2010, he’s been on the Blue Arrow Records label, which is run out of a Cleveland record store, and these releases are basically only available from the retailer! Look on iTunes and you’ll see his Rounder and Vapor Records catalog for sale. Nothing from later than 2013. This evening there was his “Ishkode! Ishkode!” album of 2016 on LP and CD as well as a handful of 7″ singles not on the album and… books as well! There was a book of songs as well as a book translated by Richman for English! Amazing stuff, but what about the show?