Posted on February 2, 2018 by postpunkmonk

After the “Sugar Tax” campaign played out,  1992 and 1993 came along and in the spring of the latter year came new and unexpected McCluskey activity. I forgot exactly where I first caught wind of the Karl [ex-Kraftwerk] Bartos/Lothar [ex-Rheingold] Manteuffel project Elektric Music, but as a Kraftwerk fan withering on the vine for those sort of kicks by 1993, I quickly bought the CD as a German import. After all, in the eight years since the disappointing “Electric Cafe,” there had only been the Kraftwerk-covers-itself album of “The Mix” to tide long-suffering [we didn’t know exactly how long, back in those august days!] fans over the drought. While that had one huge step forward [the radical new version of “Radioactivity”] the rest was pretty tepid stuff from the once innovative, but now moribund group.

Elektric Music’s “Esperanto” had much of what we had wanted from Kraftwerk but had not gotten. Vibrancy for a start, and no stultifying overriding theme. Seven tracks from technopop to techno and a clear winner for Bartos. When my copy arrived in the mail, I was surprised to see that two songs, “Showbusiness” and “Kissing The Machine,” were co-written with Andy McCluskey and moreover, he sang lead on the latter. The quavery synth leads on that song would come to resonate in the next 25 years of OMD even as the song was revisited by McCluskey on his own terms in the distant future. “Esperanto” was an album I played incessantly and definitely my pick for favorite album of 1993. Possibly the last year when I can nail down such a dated-by-then concept. I thought it might be a taster for any upcoming OMD activity, but I could not have been more wrong.

I vaguely recall driving around and listening to WPRK-FM as I often did. The car had cassette only, and I had been pretty much cassette-free from 1985. So I listened to college radio. It was eclectic and most-importantly, advertising-free. One afternoon I heard what was a new OMD song: “Stand Above Me” and I had no idea that this was out there in the world at that time. I soon drove over to Alobar Books + Music and sure enough; they had a used promo copy of the album in their bins, which I immediately bought. If I recall correctly, there were also giveaway promo stickers promoting the album on the shop counter near checkout for all and sundry to take, so my copy has had the sticker [the same size as the cover booklet] tucked inside of it for 25 years now. How the mighty had fallen. I was used to buying OMD albums as expensive imports, usually before they ever for the domestic release. Even “Sugar Tax” had been obtained this way. As it turned out, it was a kindness that I bought the album for what was probably under $7.00. 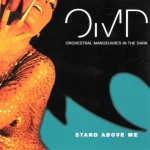 The first single had been “Stand Above Me” and even on the radio, it had sounded like McCluskey was trying to hammer out a sequel to the surprisingly successful “Sailing On The Seven Seas.” The very same sort of walking/glamrock beat anchored this one down. The lyrics were a darn sight better, though nothing spectacular. But it was all too familiar. It followed closely to the format of “Sugar Tax” [open the album with a energetic, stomping, glam bubblegum hit] and offered no surprises. I eventually ended up buying the importUK CD5 of this as well as the US CD5, which had differing, grotesquely extended early 90s club mixes.

Phil Coxon, who had co-produced the album with McCluskey, and Philip Kelsey of DMC [Dance Music Corporation] delivered ten minute mixes appropriate for rave audiences with the requisite verbose remix titles like “Stand Above Me (A 10-Minute Therapy Session Into Hyperlife Mix)” from Coxon or “Stand Above Me (Transcendental Constant Viper Trip Mix)” by Kelsey. Nothing I’d want to revisit twice. It was pre-released to DJ clientele with the Coxon mix under the nom-du-disque “Liberator” before anyone knew who it really was. That was just how we rolled with anonymous club mixes back in that crazy, mixed up time. Lots of dreadfully untrendy bands were trying their hand at the DJ market under assumed names since no hip DJ would probably touch an OMD record.

The next track was the third single from the album. “Everyday” was distinguished by a co-writing credit from Paul Humphreys. This was probably one of the songs they were writing together that prompted Paul to walk away in 1989. It’s nothing special. In fact, it sounded like another slightly melancholic [yet syrupy] mid-tempo ballad in the vein of “Pandora’s Box” yet not as memorable. Another case of following the “Sugar Tax” template to the letter. The only distinctive feature of this song is the clumsiest middle eight I would ever hear in a song… at least until Ultravox released a full album with nothing but clumsy middle eights with “Brilliant.”

The plodding “King Of Stone” offered yet more unnerving reliance on formula. In this case a turgid third track on the album featuring the omnipresent shuffle dance beat so prevalent in the awful club music of the early-mid 90s. Honestly, that was very clearly a popular beat that I could absolutely never see the appeal of. Listening to this song was like waiting for paint to dry! Following the shuffle-beat third track, it was time for the Fast Tempo Electro Dancepop® number. “Sugar Tax” had the somewhat agreeable “Speed Of Light” but all we had here was “Dollar Girl,” a song about Russian prostitutes being paid in greenbacks. All of it deadly dull and as mirthlessly rote as if it had been carved in stone. This album had to get better, because it couldn’t get much worse.

6 Responses to Rock GPA: Orchestral Manoeuvres In The Dark [part 35]