Posted on January 2, 2018 by postpunkmonk 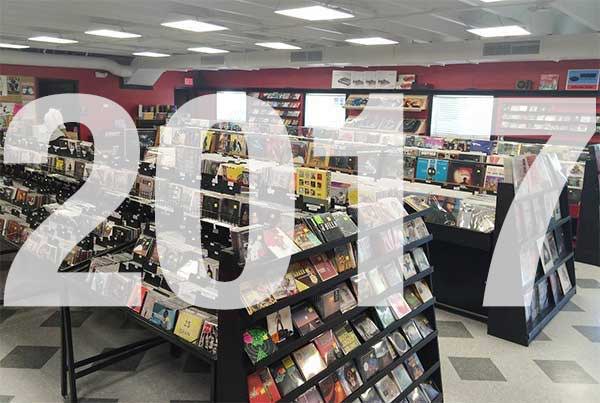 “Going into 2017, I’d like to see a slight paring back of music bought in the upcoming year. Last year I bought a release for every post made in the year [210] and that’s a bit too much stuff. I know for a fact that I can be just as satisfied having spent half the money that I did last year, so let’s see if we can move it in that direction a little. If I look at 2016, there were many months with few titles balanced by months of drowning in music. I’d like to reign in the focus a bit and spend more effort getting the things on my want list in lieu of cheap available thrills.”

So that was where I left off on last year’s music buying roundup. As it stood, this year I spent a healthy 20% less on music, although the amount of music was down by a third. Overall price per “release” [and I count a release as a single DL as much as a boxed set of CDs] was up but about the same percentage, so the costs were higher. This I put down to buying directly from the artist via merch tables, Pledge Music campaigns and the like. Also, it was significant that I missed the annual Harvest Anniversary sale in August. That could have shaved off a full dollar/release costs if it had been a “good one.”

No 10″ singles this year, but the 12″ single action was up considerably. LPs and 7″ers were fairly anemic and CD totals were less than half of 2016. Ouch. Downloads were on the downside. What does the data look like?

Hmm. The titles/cost points for 2017 are worryingly close together; indicating higher costs per unit. The greater the divergence between them, the happier my wallet is. Of course, most of what I buy is Old Music For Old People® but there were still 16 releases that were of this calendar year, so let’s try to shoehorn them into a list!

Shopping this year was tempered by restraint at year’s end. The October King Crimson show had a big fat merch buy associated with it, which was pretty much the last of the year for me, with nothing bought in November or December. That was enjoyable. I’d like to have more months where I buy nothing next year. Let’s see if I can manage it.

Best store of the year was the new Lunchbox Records in Charlotte. Their new location was whole realms more fantastic than their previous, depressingly typical hipster store. That was then. This is now! Better store. Better vibe. Much better browsing. Lighting. Air conditioning. All of these things make me a happy shopper, but when they are capped by a highly desirable selection of music to buy, then that’s best of breed. Charlotte, North Carolina now contains the two best stores in the state:  Repo Record and Lunchbox.

I have just bought some of the first music of 2018 yesterday. I want to keep paring down the amount I spend, but we’ll see how much further I can take it and still thrive. According to the graph, this year was the third most money I’d spent since starting this blog. Less money buying things and more time spent listening to what I already have would be optimal, but there are some long standing B-sides/bonus tracks missing from the Record Cell before I could remaster several albums I’ve been waiting a long time for. Maybe this is the year that I buy those pesky Fingerprintz/Slow Children/Invaders/Dee Harris singles that have mocked me for decades by now. Allowing me to finally finish off long-awaited REVO projects.