“Junk Culture” opened with something missing since album one; an instrumental. The title track was also their second dalliance with dub reggae [following the “Messages” dub, “Taking Sides Again” on the 10″ single of that title] but at least this time, one could assume that they had been influenced by the band’s recording in Monserrat. This time, they were not recording in England and it was 1984; why not get some of that Duran Duran sun + sand action? New producer Brian Tench [Belle Stars, Bow Wow Wow, and Buck’s Fizz] was in the driver’s seat but for a band that had just had their career momentum wiped clean with the sales of their previous album, opening with an instrumental was a gutsy move showing that there was still some recalcitrance left in the band.

Due to the reliance on the sampling Emulator keyboards, the end result resembled Art Of Noise gone reggae with typical OMD touches. I liked the actual bass guitar that Andy McCluskey had returned to following mostly synth bass the last time out. The band’s penchant for choral patches were moved from the Mellotron to the Emulator; giving their use the thinner digital sheen prevalent at the time. With digital tools coming into vogue, the band would never sound as sonically rich as the second and third albums had. At the time I was enthusiastic about sampling, but that got beaten out of me, eventually, and I can look back at the decision to rely on them as a sea change for the worse. This band would never sound as rich as “Architecture + Morality” or “Organisation” going forward and I’d just have to deal with it. At least the drumming here relied on both programming and live kit as played by Malcolm Holmes for some aural interest. On this album he would be diving into radically new percussive textures for OMD.

The third single released from the album was a real bright spot on side one. “Tesla Girls” showed that OMD could write an upbeat, slightly trendy, dancepop number while imbuing it with touches that only they could provide. First of all, no other band would have such a geeky lyrical conceit. Only OMD would invoke Nikola Tesla in a song about how they were helplessly in thrall to women! The use of stuttering sampler hooks was au courant without sounding like pandering. So on this single, OMD were rushing headfirst into lighter, more typical lyrical subject matter. They even broke the ice with the “L-word” [love] here, but they made any artistic compromises strictly on their own terms. By invoking Tesla and even putting his name in the title, they scored a huge win with this song and managed to create what I would call an OMD classic that still almost made it into the UK top 20. A great showing for the third single pulled form the album. 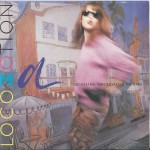 I can’t be so enthusiastic about their choice of a pre-release single from  this album. “Locomotion” took a sidestep from reggae into soca territory with a live horn section added to the mix, as arranged by Tony Visconti. Malcolm Holmes really went wild on percussion in radical ways here, but the overall song is nothing to write home about. It’s a listenable but ultimately banal pop song about how the singer can’t stay away from a particular woman. There is scant OMD DNA in this one, unlike the preceding tune. But in defiance of my lack of enthusiasm, it did what it was supposed to.  It went to number five un the UK charts, breaking the “Dazzle Ships Curse” and did strong top 20 placings throughout Europe as well. Here in America, it was the first single the band released after moving from Epic [who didn’t have a clue about this band] to A+M Records and it duly got a 7″ and 12″ release as A+M were interested in selling records, though it was still a “low rotation” MTV track which hardly troubled the US charts.

After two singles in a row it was time for a deep cut. “Apollo” was another track that was, on the face of it, another song about being smitten by a female. Similar to “Tesla Girls” albeit lacking in the witty if obscure point of view they invested that song with. The middle eight here, was particularly pedestrian; featuring jangly rhythm guitar and conga percussion. Why then, do I love this song in spite of these damning traits? First and foremost, the song has an incredible dynamic range in its arrangement. The sampled voices chanting “Apollo” in the intro were a better usage of sampling than average for the album. The overripe portamento on the lead synth contrasts nicely with the whipcrack synth percussion and the thunderous, stuttering drum programming. And the jangly rhythm guitar hook sat on it all like a red cherry on top of the whipped cream and ground peanuts topping the ice cream cone that it was. The final brilliant touch I appreciated as well was McCluskey’s split octave double tracked lead vocals. That was an old Bowie trick well played here. Except for the middle eight, I love this track from start to its dazzling cold finish. Maybe I shouldn’t, but I do!

The eclectic side one closed out with the sublime fourth single pulled from the album. “Never Turn Away” managed to really deliver in a gorgeous way, the sort of heart wrenching melody that Paul Humphreys had previously brought to the table with “Souvenir.” Back when “Architecture + Morality” was released, the “youth section” of my local newspaper carried a syndicated story on the band where the writer; perhaps grasping for straws, likened them to “The Beach Boys in outer space.” Having already been a fan I failed to see this metaphor at that time, but the harmonies here that acted as a counterpoint to Humphrey’s breathy lead vocals did have a decidedly Wilsonesque hint to them.

The cascading synth hook acted as the chorus here; making this song a throwback to the band’s now discarded early style. It’s all breathtakingly beautiful even if I can’t begin to tell you what the lyrics are on about. This one was a real slow-burner, with it coming to the forefront of my admiration over the last 20 years. Sadly, this one could only muster number 70 in the UK charts at the time. Then again, it was the fourth single from “Junk Culture.” This in itself was another sign of the band’s capitulation towards “playing the game.” When Virgin had wanted to pull a fourth single [“She’s Leaving”] from “Architecture + Morality,” the band balked and put their feet down, though it did sneak out in Germany, their number two market. By this time, the band would not be so headstrong.

17 Responses to Rock GPA: Orchestral Manoeuvres In The Dark [part 19]