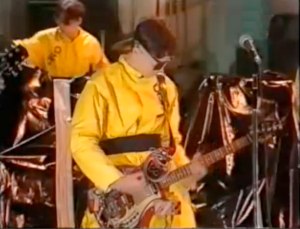 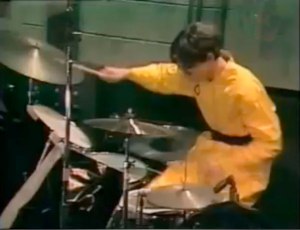 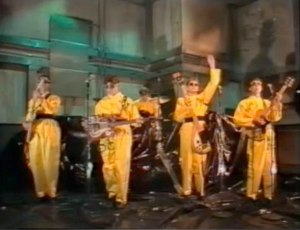 It was the evening of October 14, 1978. As was my custom at the time, I was watching Saturday Night Live. I watched for the comedy. The typical SNL music act was usually someone who I might have read about but never heard. Tom Waits. Leon Redbone. Those types of acts. Once, I saw Eddie Money and following his appearance, his song “Baby Hold On” quickly became a pop hit, leaving me to hear it endlessly on the Top 40 radio of 1977. But that was atypical for SNL. Back then, their musical choices were decidedly non-commercial.

Never moreso than with the combo who had their first appearance on Saturday Night Live that weekend. I had not heard about DEVO previously, since they flew far under my immature musical radar, which hadn’t left the nest yet. Host Fred Willard introduced them and I was subjected to five guys in industrial yellow jumpsuits and they were playing the worst version of The Rolling Stones classic “Satisfaction” I’d ever heard! They moved like insect robots and used rhythms that sprawled far and away from the comforting 4/4 that made up 99.8% of the pop music I’d been exposed to for most of my life.

The lead singer had a guitar that was covered in boxes and switches and had an alien tone that was nothing like the “wicked” fuzztone of the Stones original. I really hadn’t seen or heard anything like it. My knee-jerk reaction was that this was the worst group I had ever seen in my entire life! The entire performance seemed calculated to alienate… which I guess is why by the time the performance was over as they ended cold on a dime, I had made the transition from offended to smitten!

This, I realized, was music for people like myself, who were proud to stand outside of society’s norms and make our own world instead of buckling under the enormous societal pressure to confirm. In the three minutes it took for them to deconstruct “Satisfaction,” I had run the gamut of responses from disdainful shock to incredulous admiration. Indeed, this was possibly the first time I’d ever been exposed to deconstructionalism in any way, shape, or form. I could now hardly wait for the band’s next song!

The next song was introduced by a film clip that seemed to take place in an apocalyptic setting [Akron, Ohio] and featured a band member and a strange general proclaiming a previously suppressed truth about mutants could now be told. Then inserts of neon letters spelling “DEVO” appeared and when it was over the action cut to the band live on stage playing their anthem, “Jocko Homo.” The band were back on stage in their yellow industrial HAZMAT suits twitching along to the even more outré meter used for this song!

Then, during the middle eight which featured the band giving a call and response about Ohio over a whacked out synthetic percussion hook, the band proceeded to strip down out of their jumpsuits and revealed similarly coordinated black shorts and t-shirts with knee and elbow pads. Then they began chanting their slogan over the churning rhythms.

I ended that evening with the strongest desire to run right out and buy that album of theirs immediately. Given that I was a high school freshman without two nickels to rub together, this was easier said than done. Never had I experienced such a whiplash of feelings about anything in such a short amount of time. Fortunately, I had a great Christmas present from a friend that year, who bought me the 1st copy of this album I ever owned. This was also most certainly the first import of any kind in my record collection. It was hardly a Record Cell at that time seeing as how it was able to sit in two plastic letter sorting devices [see left] that were each just five inches long, sitting on the top of my chest of drawers in my room. 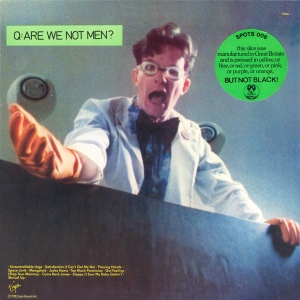 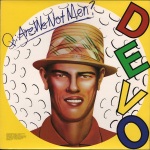 This was my only version of the album for years, and it was a delightful watermelon red slice of vinyl. I bought the first Virgin CD of it in 1993, which was bundled with their second album on a twofer CD, but still with the same art I always had. It wasn’t until my wife bought me a copy of the US album several years later that I had the classic US artwork for this album. But if Talking Heads cover of “Take Me To The River” switched a bulb on over my head during the summer of 1978, the appearance of DEVO on my television a few months later had an even more galvanizing effect in my developing mind.

When I began to read about this “New Wave of rock and roll” in the [very] mainstream press that managed to reach my eyes shortly afterward, the names of DEVO and Talking Heads were always prominent and I made sure to note what other groups were associated with these upstarts. This seemed to be the emergence of people who were actually like me making rock music. Most rock stars seemed like the cretinous jocks who didn’t impress me in school. I didn’t know it at the time, but I would soon go from merely liking music to obsessing over it within a very short span. The positive feedback I wasn’t getting from my peer group or society was embedded within the grooves of these “New Wave” records that had managed to break out of the underground and reach my young ears.