Posted on October 5, 2017 by postpunkmonk

Mother McCree! Lightning can strike when you least expect it to! Last night, after making a pizza, I was having a leisurely dinner with my wife. She had looked at the local freekly, which I had brought home yesterday and had expressed dismay at the appearance of Emo Philips; one of my favorite comedians and one of the four⇓ I have actually paid to see…many, many years ago. Suffice to say, I am not a “comedy guy.” It’s usually music or nothing that snags my entertainment dollar. After she read the newspaper, it was my turn. When I got to the club ads, it was time to pay attention, lest I miss something. It was at the top of the display ad that I saw it; fighting for space against the larger, bolder type surrounding it, not to mention the color photo of Philips.

“You have to go!” she admonished.

This came as a shock to the both of us since we had just attended a show by The Church [more on this later] only nine days prior and there were no posters at the club trumpeting this important fact. This one must have slipped under the wire quickly. I scoped Gabrels’ website for a showtime. Doors 7:00 p.m. and showtime 8:00 p.m. It was then 7:40. I frantically searched for a t-shirt that was not promoting some YWCA event while my wife grabbed the Tin Machine CD that I would love to have Gabrels autograph and I was out of that house in two shakes of a lamb’s tail. The trip to the club took 15 minutes. I entered the venue, paid my fee and asked the ticket seller [who gave me an actual paper ticket!] how this could have happened. He responded that the club confirmed the booking about three weeks ago; past the production cutoff for this month’s poster quota. I had lucked out in viewing the freekly ad in the most timely fashion possible; not always how this scenario played out.

It was barely after eight and the club was desolate! Apparently there was an opening act, Alex Culbreath, a blues/Americana player who swapped between electric and acoustic while operating a kick drum and tambouring via foot pedals. He began around 8:15 and played the requisite 30-40 minutes as federally mandated by the Opening Act Bylaws, Sec. E, sub-section 17. Not my cup of meat, but he was amiable and I was in a good, if strange, mood. I can’t think of another time when I found myself attending a concert within a window of opportunity lasting a fraction of an hour. My head was still swimming.

The pedalboard of the gods

The crew came out and prepped the stage while slightly more music lovers filtered in. I could not have been the only person blindsided… no… almost blindsided by this event. As the techs did their work, the club now had between 20 and 30 people in it. A magnitude more than for the opener but still evidence of yet another Asheville “pearls before swine” concert at The Grey Eagle. With my tastes in music, it’s a wonder that any act I like gets booked here, thought they seem to do so often enough. Apart from a Southern Culture On The Skids show [whom I never miss], or a one-off like Kishi Bashi, I’d be hard pressed to name a Grey Eagle show that I attended where the club was anywhere close to capacity. 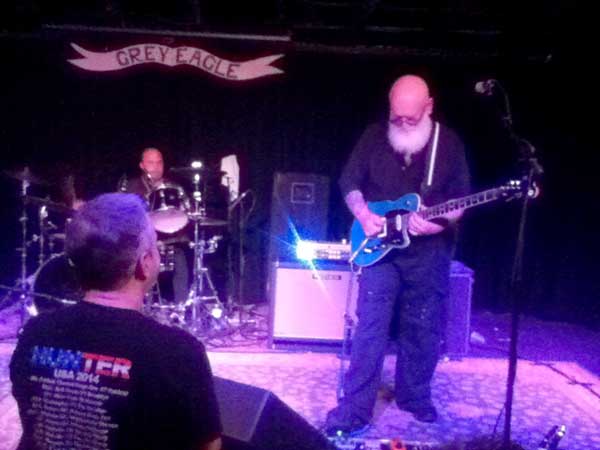 The last time I had seen Gabrels play was at the infamous Chili Pepper, night two, on the “Earthling” club tour for David Bowie’s band. That was nearly 20 years ago. There has been a lot of water under the bridge since then. I’ve changed dramatically even as the world around me has mutated beyond recognition. The tracks I sampled off of Gabrels’ Bandcamp page from the Imaginary Friends studio album sounded very good. I was expecting a good time, but as Robert Fripp so eloquently put it, albums are love letters while concerts are hot dates. And this date kicked off in the torrid zone and quickly moved to smoking hot.

Quite simply, Gabrels had definitely continued to develop and push boundaries in the 20 years I had not heard him play. His playing this night was whole orders of magnitude more awe-inspiring than when I had seen him with David Bowie decades ago. And I certainly liked him then! The songs he was playing were largely originals with a few covers [“Messin’ With The Kid,”“Wish You Were Her”] added to the mix. I was thrilled to hear a spirited version of Tin Machine’s excellent “Bus Stop!” Now I had heard two songs from “Tin Machine” live. I desperately wanted to experience that band live but it was not in the 1989 cards. The vibe for this band was power trio/alt rock with a touch of blues; but that was just the basic framework. The emotional and technical cores of the performance were the lengthy, improvisational solos of the gods that Gabrels was inserting into the mix like a brilliant jazzbo. With Kevin Hornback on bass and Marc Pisapia holding down a steady beat, Gabrels had the foundation to go to amazing places in his lengthy solos.

Who knew he could sing too?

Not every song had them, but when the seven or eight solos did hit, they were simply astonishing work. The solos could be real face-melters. Not merely reflecting mindless brutality, but breath-taking works of finesse that focused the emotional core of the performance to a visceral peak level. Then they also ran the gamut to simpler, yet stunningly beautiful and fluid explorations of mood and sound. Quite simply, with this concert, Reeves Gabrels joined Robert Fripp at the front of my queue of favorite guitarists.

Throughout the show Gabrels spoke affably to the audience; throwing a little light on the hows and whys of this quick stop in Asheville. Their tour had begun on the 1st in his native Nashville. The band had a two day travel period from the point of origin to their next date in New Jersey. The thought had apparently been “why not stop off in Asheville on the way?” For this I was eternally grateful. With such a sparse audience, we tended to crowd into the stage area for a better vibe. 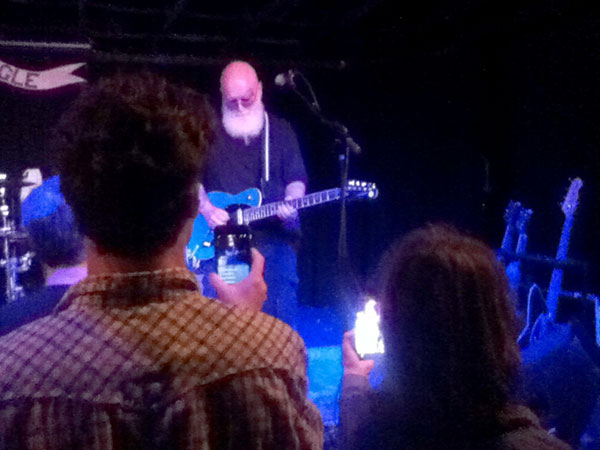 I had to laugh at two people in front of me, not a foot apart, live-streaming the show on their phones. Whatever! I took only a few snaps with my iPod to get some illustrations for this review, but I did record the last solo of the evening as he warned us that there were only two songs left in the set at one point. “But one of em’s real long” he added. When that last song began, the thought occurred that I should record his last solo, so I did. All 7:37 of it as he sent us off with a glorious benediction of sound into the evening. When it ended there was a pregnant pause, as we were all loathe to break its spell before the audience gave a spirited reaction.

It was almost 11 p.m. when the show wrapped. There was no encore. After that last solo, what would have been the point? I had seen that the tour manager had set up a small merch table on the floor at stage right. On it were all sorts of Gabrels CDs, priced to move at $10/per. I had spent my mad money on entry to the show but was more than prepared to purchase with their Square account, when I found out that there was no Square account. I panicked for a moment until one concert goer reminded me that The Grey Eagle had an ATM on the premises. Access fee be damned, I was going to have some of the music on offer tonight! I saw not only the studio album with His Imaginary Friends, but also a duet album made with Bill Nelson that I had just seen a few hours earlier on his website discography! Then the ATM in the bar/restaurant area failed to deliver; it had an “out of service” sign on it and I quickly made a bee-line for my car and my credit union’s ATM located a few miles away. Luck was smiling again on me this evening as it was in service for a change. I went back to the club and purchased the two CDs I needed badly, and ascertaining that Gabrels was not venturing out to meet his public [and I could have missed him in the 8-10 minutes it took to go to my ATM and back] I took the trip home.

I popped in the “Fantastic Guitars” CD made with Nelson and was rewarded with electronica that took in gorgeously abstract soundscapes in the first minute, but I wanted to hear something else. I had recorded that final solo and thus played it from my iPod Touch through the car stereo. It sounded excellent. Why had I not recorded the whole concert? Because you never know when lightning is going to strike as it most definitely had that evening. Fortunately, there is a recourse for us. On October 1st, Mr. Gabrels had released a live album with the same lineup I had just seen that evening. On it, you will get an experience similar to what I had just lived through with all of the solos that were only barely hinted at on the studio album. And it’s yours for the price of a chai latte and biscotti. Sample below.

But that’s just the next best thing. What you really need to ask yourself is this question: do I live within driving distance of the Reeves Gabrels US tour of wonder that The Monk has just encountered? If the answer is “yes,” then good lord, drop everything and bask in the glow of this man’s eloquent guitar at your earliest convenience! This is music packed with beauty, power, and a sense of adventure. Playing of this caliber doesn’t happen every decade! Here are the remaining 13 of the 15 dates in total.

⇓ For the record I have also seen shows by: Judy Tenuta, Sandra Bernhard, and Eddie Izzard.