Posted on September 19, 2017 by postpunkmonk

The perky drumbox that set the pace of “Bunker Soldiers” was adorned with an expansive, almost Asian melody on the polysynth. It plays almost like a cute parody of technopop until the chorus, where the band have obviously been hitting their Velvet Underground records.  In a gambit taken straight from “The Murder Mystery,” the title is spelled at random in the left channel while random numbers are spoken in the right. The deliberate deconstruction of data into noise that cannot be parsed was an early move that this band were going to play the rock game by their rules. After all, they were only doing this for fun.

OMD were formed while Andy McCluskey and Paul Humphreys were still in school. They first knocked around under the guise of Hitler’s Unterpants who sounded for all the world like kids goofing at being a band rather than the real thing. By the time of college, they had formed a large band known as, The Id, and gigged around Liverpool from ’77-’78 before breaking up. McCluskey played bass and sang while Humphreys, an electronics buff, played keyboards. Julia Kneale and John Floyd also sang and the drummer was Malcolm Holmes. They had a second bass player, Steve Hollas, and a pair of guitarists: Neill Shenton and Gary Hodgson. With eight members, it was impressive that they lasted as long as they did.

After the band split, having only recorded three songs in primitive demo form. One of these, “Julia’s Song,” was posthumously released on a 1979 compilation of Liverpool bands called “Street To Street.” McCluskey joined the first Liverpool technopop band, Dalek I Love You, for all of a month before realizing that Alan Gill was not going to cede the writing spot in the group to others. He then reunited with childhood chum Humphreys, and they set about making their own mark as Orchestral Manœuvres In The Dark; a band name that was as different as possible to the prevailing punk name ethos of the time.

The band recorded a two track demo as produced by manager Paul Collister under the nom du disque Chester Valentino [“Electricity” + “Almost”] and sent out copies and quickly got the nod from Tony Wilson and Factory Records. Actually, that’s not quite right. It was Wilson’s wife who thought that OMD had that certain something, and convinced her mate to sign them for a single. The band were favoring the demo recordings to be pressed on 7″. Wilson thought “let’s see what Martin Hannett” can do with them.” Hannett was the in-house producer doing interesting work with Joy Division at the time and he favored a more polished sound, heavy on the reverb for the iconic “Electricity.” For release the band got their demo on the A-side with Hannett’s version of “Almost” on the B-side.

While McCluskey had designed all of the band promo materials until then, they wisely ceded design control to Factory’s in-house designer Peter Saville and the start of a long partnership and many sleeves began when Saville suggested a radical, black-on-black thermographic printed sleeve; similar to how business cards were made back in the 70s. When the ink was printed to the surface of the sleeve, before it had a chance to dry [which takes hours] it was dusted with plastic powder and blown off, leaving the powder affixed to the still wet ink. Then the sleeves were heated, allowing the plastic powder to expand and puff up, giving the printing a tactile element. Because of the expense involved, there were only 5000 of these sleeves printed for the first, 1979 release of the single. I once bought one of these mail order for about $30 in 1986-5 and rethought the cost and returned it to the dealer for a refund – like a fool!!! The median cost now is five times that. 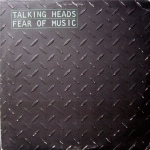 Having singed a single deal with Factory, this quickly snowballed into a long-term deal with Dindisc, a Virgin subsidiary as run by Carol Wilson; the aforementioned wife of Tony Wilson who knew a good thing when she heard it. OMD and “Chester Valentino” took their advance for the album and sagely built their own studio with it, reasoning that this might be their only ever album and instead of running up bills in someone else’s studio, they would at least have this to show for it when it all faded. But the best laid-plans of mice and men beg to differ sometimes. In early 1980, their debut album was released on Dindisc with a striking Saville/Ben Kelly cover as shown above. Kelly was an industrial designer and partner of Saville who had punched some metal panels like that and Saville had liked the look. The losenge shapes were stamped out of the outer sleeve, leaving the orange inner sleeve visible from inside. Saville admitted that he was influenced by Talking Heads award-winning “Fear Of Music” sleeve with an embossed black-on-black diamond plate texture of the previous year. Come 1980, Saville would be the one taking home awards for his OMD sleeve. Thank goodness I was able to buy a pristine first pressing of this in the blue/orange 12×12 grid sleeve as shown above in the early 90s for about $30. Mint- copies now are over twice that.

Next: …What about the other 9 songs?

3 Responses to Rock GPA: Orchestral Manoeuvres In The Dark [part 2]