Posted on September 18, 2017 by postpunkmonk

Well, with the latest OMD album finally in the Record Cell, it was time to breach the notion of another really long Rock GPA for this highest level Core Collection band in my collection. I have lots of deep collections, but really, there are but three [technically four] bands that sit on the top shelf: Ultravox/John Foxx, Simple Minds, and Orchestral Manœuvres In The Dark. I’ve already done Ultravox. I spent over half of a year examining my thoughts on the Simple Minds career up to the point of their 2014 album. I can’t do one on John Foxx [yet] because he’s so prolific that I still don’t have all of his albums! In spite of owning dozens. But I do have “The Punishment Of Luxury” in house, and the time is nigh for a thorough examination of this beguiling technopop band who perhaps come the closest to embodying all of my attitudes within the worldview that informs their music. As a result of this, there is a bond that I feel to the music of OMD that is more intimate than the more dispassionate linkage I feel to other bands of a similar stature in my Record Cell.

My first exposure to OMD was on Mike Cooper’s “Import Hour,” a weekly program on my local FM Rock radio station WORJ-FM. It was probably late 1980 when I chanced to hear Cooper play the band’s debut single, “Electricity.” He also played the album cut “The Messerschmitt Twins” from “Orchestral Manœuvres In The Dark.” This probably meant that he was working from the import debut album and not the single re-release of “Electricity.” My ears perked up at the paean to power generation that clearly marked this band as disciples of Kraftwerk, though the extent of it at that time was something that I could probably barely parse. “The Messerschmitt Twins” was something else entirely, though today I hear more Kraftwerk in its bleak, arid landscapes. In any case, I had absolutely noted the band and their approach and I put them in the box marked “investigate this band – pronto.” 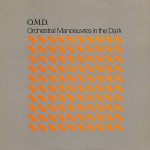 All was quiet on the musical front until the late Spring of 1981, when I saw that the short-lived Virgin/Epic label linkup released an album called “Orchestral Manœuvres In The Dark” all across the land. I made it my album to get that week and it instantly became an absolute favorite! I played it constantly. I took it everywhere and played it. I took it on cassette decks and carried it around with me everywhere I went. I played it in friend’s cars on a cassette recorder that my computer used to write and store programs on! I played OMD for any and all of my friends, who all took the band to their heart as well, to varying degrees. This was a major new band for my ears at a time when there was a surplus of such things in the world.

The sound on this album went from hook-laden technopop to brooding, gothic atmospherics of a cinematic bent. The first time I heard an electronic ballad was here, and it was a love song to an oil refinery! A 6:30 love song to an oil refinery. And it was stunning. I had never heard anything this passionate, yet, strange before. The band were definitely oddballs. None of their songs were typical pop/rock fare. Their subject matter was highly idiosyncratic and abstract/intellectual. There were no love songs. By the  time hat I entered college in the Fall, this band was one of my absolute favorites. As the year progressed, I was rapidly descending [or should that be ascending] into a world of imported records and secret musical knowledge making itself manifest to me. As wonderful as “Orchestral Manœuvres In The Dark” I had by tat time learned that it was a compilation of the first two OMD albums for the American market. The time was now to find and purchase the real albums as released in the UK.

5 Responses to Rock GPA: Orchestral Manoeuvres In The Dark [part 1]