Posted on September 7, 2017 by postpunkmonk

“Tryouts For The Human Race” began like bubbles of Syndrums® rising up from the blue depths, faster and faster as the approaching and relentless sequencers announced that yes, Giorgio Moroder was indeed in the room. What impressed was that the resulting song was pure Sparks yet also obviously related to the iconic “I Feel Love.” It was a perfect synergy of their two aesthetics. We can only be ever thankful that after hearing “I Feel Love” the Mael brothers had the chutzpah to actually think “let’s make an album with this guy” instead of slinking off to do their own take on it. Many musicians I love hold a torch for “I Feel Love.” Sparks were the first [and best] to think of asking him to write and produce.

As for the song it’s warm patina of technology appeals to my ears like only late 70s synthesizer music can. It staggers my mind to think that music like this, so thick, rich and warm, was thought of as cold and foreboding back in the day by lesser minds. As a song, “Tryouts For The Human Race” stands firm as the best song written about sperm cells ever; and that’s a crowded field, even when taking the oeuvre of just Bootsy Collins into consideration!

The extended glissandos of synth that open op “Academy Award Performance” show that Moroder even added his distinct touch to the song that was the closest thing to what Sparks had done previously. That it to say, it came the closest to sounding like a classic Sparks tune from their imperial Island Records period. Tellingly, this one just sported a Ron Mael writing credit. It’s more frantic, upbeat Sparks hyperpop with less of the sleekness that the first track sported. That said, the relentless [human] drumming by the metronomic Keith Forsey is breathtaking it its flawless timekeeping. Even so, he expertly adds surgically ideal fills throughout his performance.

Only a single in Europe, “La Dolce Vita” nevertheless enthralls with its breathy, slow-attack, fast release washes of synth under which the frantic synth loops at a much faster tempo create musical sparks. The flute-like synth leads by Ron [or was it Moroder – both are credited for all synth playing] added a carefree touch to the frankly hilarious lyrics celebrating the life of a blasé gigolo. It’s all very European in every sense of the word with the Eurodisco sound suffused through a song that would ideally be played in the discos of Italy where scenarios like those depicted in the lyrics very might well be taking place in the very room where it was being played. One hopes.

The only other song on the album not sporting a Moroder writing credit was the kinetic ode to restlessness “Beat The Clock.” It’s completely understandable how this zippy, infectious number became Sparks first top 10 single in the UK for five years. The jittery sequencers underpinning this one were form follows function perfection. Ron Mael revealed in the liner notes to this disc that their song originally sounded like The Velvet Underground before Moroder got ahold of it. If that was the case, then they should have given him another writing credit as I can’t imagine that at all.

The eerie “My Other Voice” was built atop a reversed rhythm loop for a weird distancing effect to the otherwise cotton candy, jazz age matinee idol veneer of it all. The long intro was poised and melodious before the vocoders obviously referenced in the title. The lyrics here were much darker than the tone of the music, which replicated some of the seamless textures of 10CCs “I’m Not In Love” but put to more ambiguous ends. When Russell croons:

the effect is far darker to my ears than the lilting music sets the listener up for.

The last of the six songs here was the leadoff single which heralded the album in the UK and gained Sparks entry to the top 20 the first time since 1974. “The Number One Song In Heaven” was the longest track here and the first Sparks 12” single, though the 7” version was only 45 seconds shorter on the “long mix” included on its B-side. The song was built in two distinct “movements” with a flowing, aria-like first part where issues of mortality were pondered to the listener. At roughly the song’s midpoint, the tempo quickly hastened in a move that was less than seamless into a high-BPM stormer with meta lyrics regarding the infectiousness of pop as descended directly from the creator; echoing the conceit that songs exist outside of our consciousness with humanity merely being a conduit for them.

I was very familiar with the version[s] of this song on “Plagiarism” where the song was actually cleaved into two separate [non-linear] tracks with Russell singing the upbeat “Part Two” and Jimmy Somerville doing his castrato act solo on “Part One,” later in the albums sequencing. It’s so much better hearing Russell singing the piece as a coherent whole. Moroder’s production still sounded contemporary and the seeds of countless dance trends were contained within his early, seminal work such as this.

This particular CD is filled with alternate mixes of the tracks from various single sources. Unlike the album, forensic listening did reveal a few noticeable vinyl rips. Presumably all of the bonus tracks were digitized from vinyl, but all but the most careful listening would not explicitly reveal that fact. The 7” mixes are for completists. I was amazed that they took pains to include the Canadian single mix of “Beat The Clock” which sported a significantly different EQ to its mix. That was attention to detail. As a Monk, I was a bit crestfallen that they did not include the two Peter Cook comedy bits from the 12” singles of “Beat The Clock” and “Tryouts For The Human Race” since I am now going to have to buy those super gimmicked records to hear these tracks.

Apparently, it was Cook talking about the songs and the album itself, and knowing him, it was probably quite funny. The 12” singles came a rainbow of vinyl hues and huge pic labels that replicated the art printed on the sleeves, save for the large holes where the labels showed through. Since the CD is 78 minutes long, these comedy bits, fascinating though they would have been for completists, were not included. The project would have gone to a 2xCD package in that case, but in a perfect world I’d pay for that.

The bonus material of the most interest to me were the extended 12” remixes of the “Tryouts For The Human Race” and “Beat The Clock.” These were one to two minutes longer than the album versions, which in the case of the former, was already quite long. It was extended by the traditional “dawn of the 12” technique of looping a section to pad out the running time. Of greater interest was the much more ambitious remix of “Beat The Clock” which was remixed and extended in the more modern mid-80s tradition – years ahead of its time – wherein a new rhythm track was constructed and the whole thing was re-arranged around it. 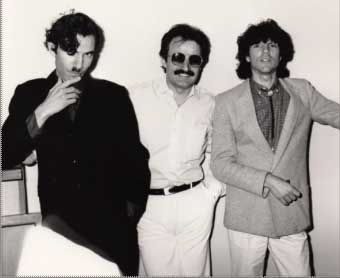 Moroder and Sparks together

Looking back at this album, I am delighted and amazed that it happened and more importantly, was successful enough to spawn four of its six songs as singles, with two of them being hits in England. It took vision for Sparks to step out of their typical rock band comfort zone and embrace something radically different. Likewise, Moroder was smart enough to work with a rock band after making a very successful name for himself as a go-to disco producer. I simply can’t imagine his later work of note [“Call Me” for example] without the steps first taken to achieve the fusion on this album of his thick, sleek Eurogrooves and the still idiosyncratic artistic POV of Sparks.

At the end of the day “No. 1 In Heaven” is immediately recognizable as both a Sparks album and as a Moroder album. Perhaps the finest album he ever produced/co-wrote, because it featured more [and more fascinating] intellectual content than was typical of disco at the time and pointed the way forward for the fusion of disco techniques and its undeniable energy to surmount the limitations of the “get up and boogie” lyrical content typical of the day. With this album a blueprint now existed to unite the previously Dionysian energy of disco with the seriously Apollonian content of art rock, and thousands of artists could plow that fertile field for the upcoming decade.