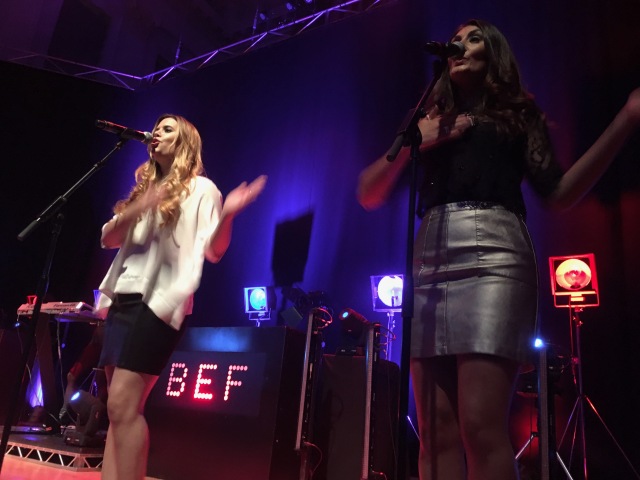 Following the events detailed in part one of this post — wherein your humble narrator enjoyed front-row seating for once-in-a-lifetime performance of Heaven 17’s Penthouse & Pavement straight through and live —we enjoyed a 20-minute break during which the management of said core-collection band assured us that, despite having missed the normal meet-and-greet period, he would arrange for us to meet the band, and as a token of good faith also presented us with the “swag bags” our VIP tickets had promised. You’d think we’d have paid £1,000 each to be there, the way they treated us, but “regular” tickets to this one-of-a-kind tour started at just £25 … an almost insultingly cheap price compared to typical large-venue ticket prices in the US and Canada. Our VIP tickets cost £100 each, and while money’s too tight to mention sometimes, we felt it a small price to pay to see a band that had been a part of my life since the early Human League releases, and blew my young white mind with the funk and fury of Penthouse & Pavement.

Peter Hooton from The Farm

Now confident that we would at least be able to shake hands and thank the lads, we returned to our “seats” (very little sitting was actually done of course) to see what a B.E.F. live show would be like. Not having read our freshly-delivered program books, we were completely unaware of what “special guests” might be awaiting us. The band, minus Glenn Gregory, took the stage once again. Ware, taking over from Gregory as the host, introduced the first guest, Pete Hooton from the band The Farm. In what would be a pattern for the evening, Hooten proceeded to sing the band’s biggest hit, “All Together Now,” in a new Heaven 17 arrangement (not wildly off from the original), and then followed that up with a cover song. Prior to performing the cover, Hooton told a short story in his thick Liverpudlian accent about having been in an occasional “all star” band called Justice Tonight that eventually included Mick Jones. He then sang the Clash song “Bankrobber,” as a tribute to Joe Strummer — pleasingly fusing Joe Strummer’s original vocal style with the Northern flavouring favored by The Farm. Naturally, lacking any guitarists (until later; more about that … later), the synth-based arrangement more strongly emphasized the reggae aspect of the song.

I had overheard someone in our row talking about Mari Wilson during the intermission, and it occurred to me that she would be a natural guest for a show like this. Sure enough, following Hooton’s spot, out she popped to my utter delight. Words cannot really describe how wonderful her H17-performed version of “Just What I Always Wanted” was, but despite no longer sporting her signature bouffant from days gone by, her Lesley Gore hairstyle and spangly dress kept her style planted firmly in the early-to-mid-60s, and as friends of this page are undoubtedly aware, she still has the pipes for it. True to her oeuvre, her cover song was “Rescue Me,” originally performed (and co-authored) by Fontella Bass in 1965. Ware himself clearly has an affinity for the soul songs of that era, and thus he and Scott provided a loving electronic tribute to it. The video below is from a later date on the tour, but provided to give you a feel for how well the band managed to recreate the feel of Wilson’s original hit.

The third guest of the evening was original Sex Pistol songwriter and bassist Glen Matlock, who has had a varied and interesting musical career too long to repeat here. He was one of the most “chatty” of the guests, telling a story about his time with the Pistols that came off a bit bitter (still!) before launching into “Pretty Vacant,” which he played on guitar. Ware accompanied on backing vocals with quite some enthusiasm. For his second song — and by now it was obvious that the guests, not Ware, had chosen which song they wanted to do — Matlock showed off his legendary sassy side by doing a growly and sarcastic version of the big hit song of the day, Pharrell’s “Happy,” as more of a gritty rocker. The song was so different from the Pharrell version that I didn’t even recognize it until the chorus, but it certainly shed new light on the helium-weight pop hit. It’s likely he intended it as a wicked commentary on the vacuousness of pop music, but I’m not sure he connected the punch on it. 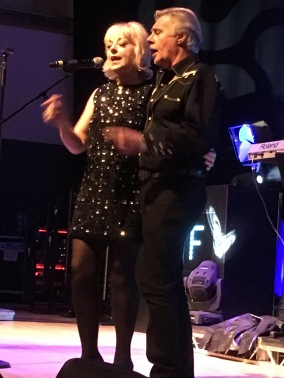 Wilson & Matlock … sounds like a detective team! This of course came from the finale of the show.

With that, Gregory finally retook the stage, and instantly reclaimed the entire show with his stunning version of Jimmy Webb’s “Wichita Lineman,” first made famous by Glen Campbell. Gregory first recorded his version as part of Music of Quality & Distinction (volume 1) in 1981, and 35 years later it is still a exceptional and unique take that adds darkness and nuance to the song. After the intensity of “Lineman,” we got another huge treat, as Ware and Gregory launched into their own version of “Don‘t You Want Me,” by the Human League, finally making full use of Godfrey and Mosleh for the first time of the evening. I expected the whole thing would end there, but no … Glenn announced they would pay tribute to the late David Bowie, and proceeded to do a remarkable cover of “Ashes to Ashes,” no doubt at Gregory’s request (he had, as noted earlier, worked with Holy Holy quite recently at the time). Now how much would you pay? But wait … there’s more! As required by law, the band then swung into “Temptation” to whip the crowd into a frenzy.

At this point I thought for sure the night was done, given the standing ovation the crowd was giving them, but Gregory calmed the room and then said that they would do a final song in memory of Colin Vearncombe, a.k.a. Black, and assembled all of the evening’s guests to lead them in another of his and Ware’s loving tribute versions, this time of “Wonderful Life.” The video below is from the Basingstoke show, but is almost identical (except for the substitution of Kelly Barnes for Godfrey) to the version we saw, right down to the outfits worn!

With that, the band and guests all said their goodbyes, and earned another standing ovation as they walked off stage, Ware and Gregory taking time to shake a few hands (on the other side of the stage, dammit) as the exited. It had been a long evening (three hours all told so far), but for us the best was still yet to come. We hung out in the lobby near the merch table for quite a while as the audience made its way out of the venue, and just before the last of the stragglers had cleared out the manager beckoned us to follow him.

We were led outside and around the hall to the backstage area, where we nervously waited for a few minutes before being led into a lounge area where Martyn and Glenn were waiting for us. Ware was of course still wearing his trademark tailored suit, while Gregory had exchanged his original jacket (which he wore only briefly during the show) for a hoodie. A lifelong dream was fulfilled as I finally got to meet them, but to my great surprise they were in no hurry to pack up and go, still quite energetic and pleased with how the show had gone. We ended up chatting with them both about a wide variety of subjects for at least a half-hour or more.

This was far better than I could have hoped for, and likely to have been way better than what I would have gotten as part of the “meet and greet” cadre of fans. I would like to think that it was the fact that we were able to converse about more than just how great they were (though of course due homage was paid in that regard) that kept them talking. I had often posted comments to Ware’s FB page, as I keep up reasonably closely with UK politics and he has been quite active on that front in recent years, and so we talked about that as much as music, and with Glenn I remember listening to his stories about touring and the thrill of writing new material, as well as asking him about the possibility of coming back to the US (he had been over with Holy Holy).

Peter Hooton was kind enough to stop by and partake of some socializing as well, and I got a chance to tell him that I was impressed with his version of “Bankrobber.” Sadly, Mari and Glen had already left before we got to the backstage area, so we didn’t get to meet them. Eventually, we rather wistfully wound up our chat with many thanks and handshakes, a recommendation for Martyn to check out this site, a quick picture — and before you know it, we found ourselves walking out of Victoria Square wondering if it had all been a dream. Our eternal gratitude to Marc Wiles for his over-and-above kindness in putting it all together for this pair of slackers, and of course a humble thank you to Martyn and Glenn for not just a wonderful night, but a wonderful career I’ve been enjoying for decades, both as B.E.F. and as Heaven 17. 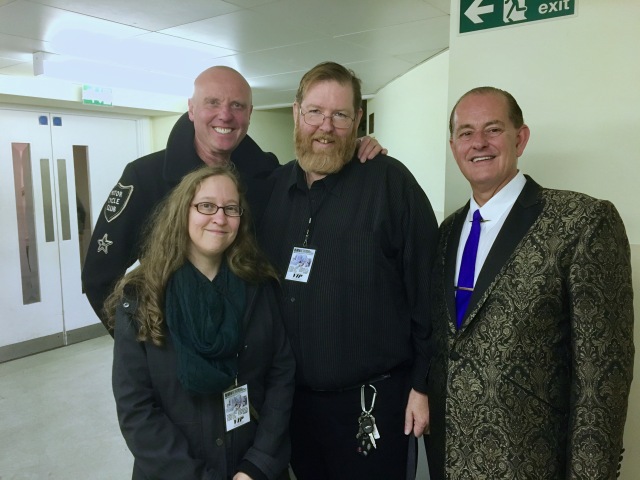 Our humble thanks also to the Monk for allowing us to fill in for him on his vacation, and to all the readers of PPM for indulging us this tale of a fanboy “holy grail.”