STOP PRESSES: Heaven 17 In USA For Two Shows Next Month! 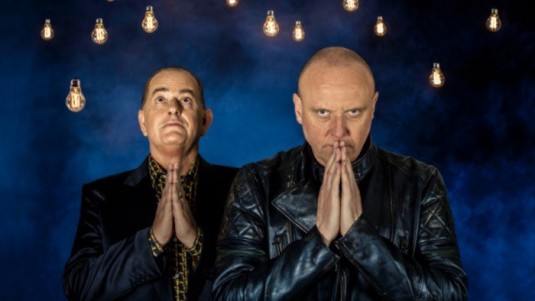 Martyn Ware and Glenn Gregory of Heaven 17 pray their American tour will sell out, but how could it not? Demand is pent up, gents!

I know we just started rambling about the latest China Crisis album, but today I’ll have to post this breaking news instead! Possibly the one band I now want to see live more than any other are Heaven 17. I always loved their music, but they never toured in their heyday. Not until they reformed in the late 90s did they entertain the notion. And they never played in America. Oh, they were pencilled in on a retro package that would have seen them bundled together with fellow Sheffielders ABC back in 2009 on the Regeneration Tour, so I was hot to attend, but they bailed out of it, thankfully, before I bought tickets. In retrospect, I should have gone to see ABC, even if Belinda Carlisle and Cutting Crew were on the bill…maybe. Losing H17 definitely made it a deal killer for me. 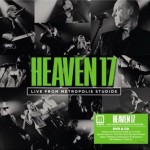 But in 2009, I was not quite the Heaven 17 fan that I am today. Their killer live album, “Live At Metropolis Studios,” from 2013, was a revelation to these ears; featuring an immense live lineup that fully and powerfully took their songbook live for the first time ever. I’d seen and heard previous tours that were albums or DVDs and they were adequate, but no more. After seeing the Metropolis show, this band shot to the top of my live wish list.

Now they will be playing in New York City at the Highline Ballroom on September 27th!

Then on Saturday, September 30th, they will be playing the Music Tastes Good Festival in Long Beach, California.

This was just released out into the world this morning, and I really have no idea about the how or why of these shows, sandwiched as they are into their normal touring schedule in a highly awkward fashion, as seen below:

I’d really love to attend, but there’s just no way, outside of going into debt, that it could happen right now. There are lots of trips for us happening this year. Lots of shows. Heck, I’ll be seeing The Church the night before where I live. My angst is tempered somewhat by the suspicion that this will not be the “full monty” killa seven piece lineup of my dreams, but a trimmed down variation with Berenice Scott on computer/keys with the core duo of Ware and Gregory. If I knew for a fact that this would e the same band as on Metropolis, I would be selling off some “family jewels” from the Record Cell to finance going. But don’t let my budget stop you, if you’ve an inclination!

Tickets go on sale this Friday the 18th at noon for the Highline show here. $30-$55 but my advice is, don’t scrimp. Treat yourself. The tickets for the Music Tastes Good Festival in Long Beach are already on sale here. At the very least, I’m hopeful that some North American fans who frequent the pages here can make it for me and report back with their findings.

16 Responses to STOP PRESSES: Heaven 17 In USA For Two Shows Next Month!