Posted on August 2, 2017 by postpunkmonk

Since there were distinct stereo panning effects in the records, it was an easy matter to determine that, yes – on side two of the “Fade To Grey” Dance Mix album, the entire side reflected having its channels reversed during production. I double checked among the two distinct CDs I also had of this title, and every one except the red banded cover was the correct stereo spread. So I worked from the corrected audio file of the second side.

From that point onward, I only had to set markers and cut/paste individual tracks into new documents and save them to have each song ready to write to CD-R. Then the next point was to design the cover art. With a straight “reissue” of a discrete title with nothing added, it is as straightforward as this sort of thing ever gets. All I had to do was to replicate the packaging and information. Which is not to say that it wasn’t work. The cover art was a little beat up [not unlike the record] with a VG, at best, cover. So I scanned the cover art and realized that the small text [much of it 6-8 points in size] was pretty badly banged up. This would require heavy reconstruction. 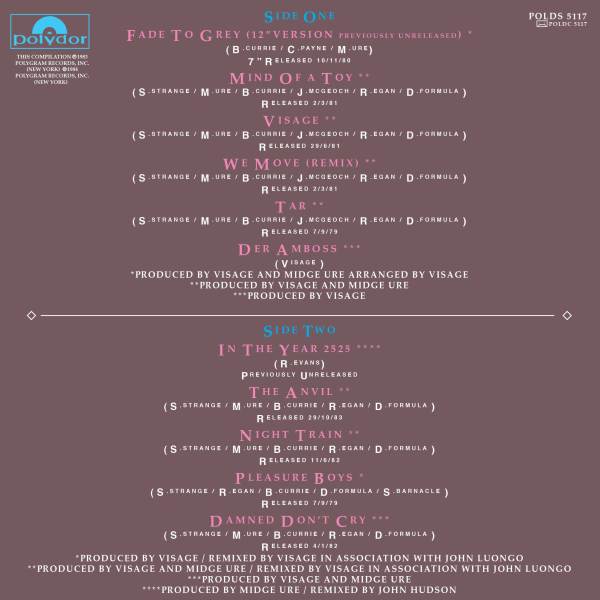 A highly accurate re-creation of the back cover… good thing I had the right fonts! Click for way bigger.

So I simply re-created the cover in Adobe Illustrator. Simple enough to do, but tedious, as the very persnickety typesetting [all set flush to the type’s cap line] was not easy to achieve even on a computer 34 years later. Thank goodness for paragraph styles! In cases like this, re-making the layout rather than working with scans is so worth the extra time spent. There was no need of a booklet since the original album had only a plain inner sleeve. Everything was on the front/back cover. I added liner notes on the inner gatefold to the cover insert and wow, we were done pretty quickly. I sat on this one for several months as I had other irons in the remastering fire that took precedence.

And now it’s done… yet while reviewing it for this posting this week, I found myself hemming and hawing over the sonics. It’s not that ClickRepair damaged the audio. Far from it! It removed the plethora of pops like the pro that it is. And the edited in intro to “In The Year 2525” sounds flawless. No, what nags a me now is the simple quality of the vinyl used. Are you familiar with well-played albums that have sustained stylus damage> This one sounds like it happened. The record plays without skipping, but has patches where it goes all dull and fuzzy. On “We Move” the song’s last third sounds like someone did some diabolical things with the EQ of it. No, this should not be what it ultimately is. There’s a clean, but difficult way forward that will deliver a remaster of this title that sounds entire realms better.

What I have to do is re-produce the album mix using my highest quality sources.

In effect, I will be doing what Steven Wilson of Porcupine Tree does when he remixes an album like “In The Court Of The Crimson King.” He goes back to the individual master tracks and re-mixes and balances the result to take the new masters to their utmost in generational quality. All while doing his level best to replicate the mix, EQ and balance of the original mix. Tedious? You bet! But I’m not the Post-Punk Monk for nothing! To date I’ve re-produced two 7″ mixes from CD sources using my two-track environment. JAPAN’s “The Art of Parties” 7″ mix and the UK 7″ mix of “Autobahn.” In both cases, I had trashed copies of the 7″ records to emulate, and the end result was several hours invested to match the edits that were made to the master tape originally to result in these 7″ mixes. Of course, the end result sounded fantastic.

This will be similar. I have the following tracks on CD:

These are simply mixed/cross faded into the adjacent tracks. At most a few panned beat loops will need to be performed to replicate the LP flow. Then there are tracks I need to take from my clean vinyl copies.

There is the “Tar” original UK 7″ version on the “Wild Life” compilation, but that single track was brickwalled, so I will rather use my copy to work from. Things will get more complicated on these three tracks.

I have “Der Amboss” on CD, but the mix on this album is a vastly different edit. After listening forensically last night and labeling every few bars distinctively in my two track editor, I suspect that I will also have to use the instrumental version of “Der Amboss,” which I have on CD on this album [see R] to re-create what this album had at the end of side one. Similarly, the edit of “The Anvil [Dance Mix]” as appears here will be re-edited from the 6:14 12″ mix, which I lack on CD. It’s been so long since I have played the 12″ of “Night Train” from vinyl, that I’m suspecting that this mix was edited from both the 6:07 Dance Mix and the 5:02 Dub Mix, which I have on 12″ single.

Join us again in another month [I hope] to see if I’ve cracked this case or have descended into madness. I will try to replicate “Der Amboss” first and if that doesn’t happen, I guess I have to table this notion… or buy another, better copy of the album.