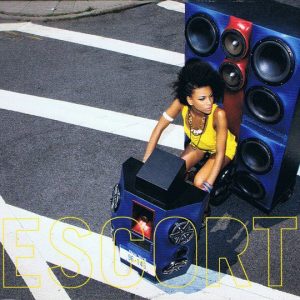 After posting about the Escort show coming to town on August 4th, I suddenly realized that I had never reviewed the first Escort album; finally obtained in late 2016. Well, that’s all about to change. At first I saw this as a DL only release, but perseverance eventually outed the preferred CD format of the debut album by the dazzling NYC disco champions.

Top commenter Echorich once left a comment somewhere here along the lines of “Caméleon Chemeleon” being one of the best August Darnell tracks he never wrote and produced, and I can get behind that sentiment; most definitely! The full breadth of the sixteen musicians on this opener bear serious comparison to the lush, musical splendor that Kid Creole + The Coconuts made their stock-in-trade, back in the late 70s. That was something most apparent when I saw Escort live. They were gunning for that Ze Records vibe most assuredly in their aim! And I’m here to tell you that they’ve nailed it.

The next track was also a single and “Cocaine Blues” was neither a blues number nor the song of the same name made famous by Johnny Cash on his “Folsom Prison” album. It most certainly was a blast of what undoubtedly contributed to 1977 with a bass line that was naggingly familiar. Not the first time I would be wracking my brains trying to discern where I had previously heard the musical quotes this album was littered with. After much deep thought, the bass line to The Rolling Stones “Undercover Of the Night” is as close as I can name it, though I think I am forgetting something even closer to the riff here. Why not hit the player below and if anyone can “name that tune,” then please leave a comment setting me straight.

The first two singles here had Joy Dragland as the vocalist, but by the time the bulk of this album was recorded, the band had shifted vocalists to Adeline Michéle, as depicted on the front cover. “Makeover” was closer to the Post-Punk side of disco, with a maddeningly familiar syncopated synth hook that I cannot for the life of me remember the source of. In any case, the juddering beat was a monster, and proof that there were many ways to create disco without dragging out the obvious tropes.

Though that was exactly what “A Sailboat In The Moonlight” did! Back when disco was ascendant, one of the most potent tropes around was the notion of taking a Tin Pan Alley classic and slapping a new coat of disco paint on it only to watch it race up the charts. Well, everything old was new again. Even in the 70s. This time it was a Duke Ellington number associated with talents as varied as Kate Smith and Billie Holliday. The first half was little but bongos, synthesized finger snaps and the sweetly delivered vocals of Ms. Michéle. Midway the song, a descending glissando of synths heralded a full bodied dance floor explosion with a four-piece brass section giving it loads.

All of the numbers thus far took disco and changed its frame, however slightly. “Starlight” was the big number here that really trafficked in recreating a distinct ’77 vibe as expertly as they could. The lush string section [all real] went far in doing so, but so did Eugene Cho’s expert hi-frequency synth squiggle hooks. It goes without saying, that all of this activity was accompanied by a four-to-the-floor beat that was disco’s calling card. 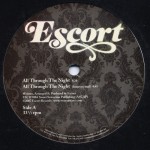 One of the most arresting tracks here was the insanely syncopated “All Through The Night.” It’s one thing for guitars, horns, or synths to latch onto the beat, but in this case Ms. Michéle’s delivery was the masterstroke that took this one far. The breathless delivery of the chorus may have been achieved on a computer, but I’m betting that this band would not abide that sort of cheating. The number had a sleazy electro feel ripped straight out of Laid Back’s deathless “White Horse,” so naturally it went far in gaining my approval.

The album ended up with a couple of numbers where the female vocalists took five while the band core of Dan Balis [guitar] and Eugene Cho [keys] took the mic for this lovely slice of NYC ELectro straight out of the John Robie/Arthur Baker playbooks. Of course, that meant lots of 16th notes sequenced tightly for our listening pleasure.

Finally, the epic closer “Karawane” adhered to a long, mostly instrumental air with added FGTH chanted vocals sporadically for a touch of emphatic disco/funk grunting over the electric piano leads of Cho and the timbale-led breakdown at the song’s middle point; echoing fully Ralph McDonald’s Calypso Breakdown,” as immortalized on the “Saturday Night fever” OST.

This was an elegant, electric disco album that paid fealty to the classic era of disco while not being afraid to bring it kicking and screaming in to the 21st century. Six of the songs here were issued as 12” singles and needless to say, I’d love to have them all, but the “Cocaine Blues” 12” is definitely out of my price range! That saucy number on wax will set you back the better part of $50 in the current economy. There was also a remix CD as well as copious DLs of these and other tracks, which, given the economy of buying this on vinyl, I may [gulp] opt for DLs. It’s highly relevant to get this material since many of the early singles were released as early as 2007 and feature Zena Kitt as the lead vocalist, meaning that the single mixes are so non-LP and that’s what attracts me like a moth to the flame, don’t you know.