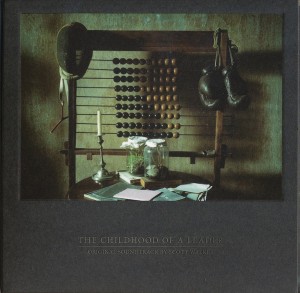 I was lucky enough to run into this [presumably obscure] want list item while shopping in Charlotte this Spring and while this was the third Scott Walker penned soundtrack offering in the last 20 years, Walker fans have been known to pursue these side projects with vigor given that the artist often takes long years between his stark and uncompromising albums. I still have not heard the “Pola X” OST that Walker penned for the Léos Carax 1999 film, but I pounced on the more readily available “And Who Shall Go to the Ball? And What Shall Go to the Ball?” ballet soundtrack he released in 2007. Ten year later, I have his latest soundtrack and it’s as compelling as his recent thread of albums  and in a more direct fashion that bypasses his penchant for avant garde intellectualism [though we approve of it].

With the film itself loosely based on a Jean-Paul Sartre short story of the same name, I’m surprised that the film makers didn’t have to beat Walker off with a stick! Walker’s mature work heavily traffics in existential dread as viewed through a political lens, so this examination of the making of a totalitarian demagogue at the time of the Treaty of Versailles had his name all over it in large, flashing neon letters.

Quite frankly, the album gets right into the heart of things [following a brief orchestral tuneup] with the frankly stunning main title theme, “Opening.” Nerve-shredding, poundingly rhythmic strings build tension expertly and evoke Bernard Hermann at his finest. The theme of the soundtrack was established here and will serve as the leitmotif of the whole score. Interjections of gypsy violins lend an Old World air to this title theme but more unsettling were the dissonant trumpet lines that flew under the brass section; suggesting the activity of carrion flies.

Near the middle of the track, a brief, albeit pert, piccolo theme rises up against the grinding juggernaut of the string section and served as a brief reminder that though the monster was latent, the subject was still a child at the story’s origin. After a far too brief 5:32 the themes begin to abate as the sort of unresolved orchestral chords so beloved by Walker bring the track to an unsettling end. The cut is completely compelling listening which will induce white knuckles from the very beginning. In a way, it’s freeing to hear Walker work his chosen themes, which are very congruent with the film itself, without the sometimes distancing intellectual trappings his powerful if harrowing albums often include. If I could buy this title theme as an extended 12″ single, I would snap it up in a hot second.

What follows this bravura performance was a series of brief cues which pared back the heightened drama of “Opening” to flesh out the action of the film. Most of these cues were brief with few over 90 seconds in length. “Cutting Flowers” managed to reference the strings up front on “It’s Raining Today” from “Scott 3” while still working in the main theme into a 0:45 cut. Most of the tracks here were orchestral traditional, but there was room for some flexing of sonic muscles. “Printing Press” managed to pull insect dread via an underlying hum of machinery into the mix. Metallic percussion suggests the clattering of high speed presses and the track was strongly redolent of the machine-like hum of the 17 year cicada brood that just emerged where I live a few weeks ago.

The score wraps with “Finale” and one can easily imagine a phalanx of bombers descending on their targets and the tension mounts as the brass section replicate air raid sirens and explosive percussion emulates artillery fire in a piece that seemed like the London Blitz. The drums and cellos that bring the cut to an abrupt, if explosive, end hammer home the sense of anxiety and alarm that runs through this soundtrack work as surely as it coursed through the last three Scott Walker solo albums. As a coda, the album included a “bonus track.” “New Dawn” was a synth demo for a cut scene and it’s strange hearing a shred of hope in this almost completely calamitous work.

Really, only “Village Walk” qualified as less than darkly portentous. At best, the recurring piccolo theme, reminded listeners that among all of this sonic monstrosity, a child was at the center of the stygian drama and that was as light as the proceedings got. I have to admit that when it ended at just over a half an hour, the impetus was to let it run again [and again]. In that respect, it’s a brief, gripping soundtrack that like the recent “The Machine Stops” OST by John Foxx + The Maths that bears repeated listening and not just because it was by a favorite musician. Rather, they were works by a favorite musician that fully succeeded beyond their primary role as accompaniment and mood setting for productions that I’ve not had the pleasure to experience. In fact, now that I have invoked Foxx, the next logical step is… could Scott Walker ever collaborate with John Foxx? While the former is insular, but not inflexible [we’re talking to you, Ralf Hütter], the latter positively thrives on vibrant collaboration. Well, I may have suggested it here first. We can only watch and wait.

5 Responses to Record Review: Scott Walker – Childhood of A Leader