Back in January, when scoping out the Roedelius show I attended nearly three months ago at The Mothlight, I couldn’t fail to notice that David J, everyone’s favorite bassist/vocalist from Bauhaus and Love + Rockets was coming to town last Friday, so I pencilled the date in on my calendar and headed out to catch the show that night. Of course, I had seen David J twice. First with Love + Rockets on their “Sweet F.A.” tour in 1996-7. I had sort of taken them for granted for so long during their imperial “alternative rock” period, that I finally capitulated, in spite of owning only “Earth, Sun, Moon” of said “imperial period.” Truth be told, that’s not even my favorite of theirs; just the one I own.

Next, we saw Bauhaus during their highly unlikely 1999 “Resurrection” tour that no one really expected. That was something amazing. But since 1989, I’d heard not a note that David J had sung. That didn’t stop me from seeing this show, though. I imagined that it would have to be worth attending. Instincts told me so. Besides, how many British Post-Punk legends ever play in my sleepy hamlet? I’d be doubly churlish to pass this up just because I was less than current on his career.

I made the West Asheville scene and once again, found my insanely perfect parking spot [I’ll never tell where it is!] so close to the club you could park your car and hop there on one foot if needed. I entered to see a poster proclaiming the evening’s performances by Xambuca and Elisa Faires as the opening acts. Interesting, because even on the day of show The Mothlight’s website failed to list any opening acts. I did my will call ritual and ambled over to the merch table which was filled with… vinyl! I saw David J’s latest, “Vagabond Songs” a double album that was just released this month and the impetus for this tour. As I was completely broke, I would not be buying even retrograde, analog merch this evening. I was lucky to have had the ticket for this show.

I also saw Elisa Faires vinyl on the table and only Xambuca dare to release the untrendy, grandad CD format. So I would not be buying any David J music, even if I did have two buckles to rub together; which I don’t. The vaunted 9:00 p.m. showtime came and went but it was 9:17 when a gent took took to the stage to no announcement. The mysterious chap had a lean, collection of loops and he built up long, slow-building drones that increased in complexity/intensity over the course of ten minutes or so. He sampled his playing on synth as well as guitar, favoring a violin now to attain a cello’s coloration on his warm riff loops. By his third song, he began building up sequencer loops that sounded very Berlin. The School, not the band! He wrapped up after about 30 minutes of play. I still had no idea who or what I had just seen. I was familiar with Xambuca and I had hoped that he was not Elisa Faires. After the fact, I discovered that he was known as Villages.

At 10:00 p.m. the club began to fill appreciably since my arrival, though the floor in front of the stage was still fairly empty except for yours truly. After a suitable interval in which Opener #1 dismantled his gear, this seemed to leave 2/3 a stage full of tech musical gear [synths, FX boxes, even a Farfisa organ] that having seen Xambuca here before, opening for Roedelius, I had assumed was their gear. I had the distinct notion that David J was a man alone this night with an acoustic guitar. We shall see. 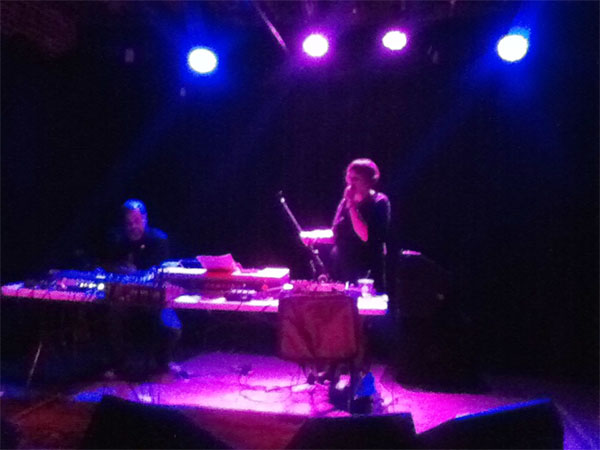 At 10:15, the man behind Xambuca and Elisa Faires took to the stage. They proffered an abstract, spiky blend of electronics and sound manipulation, with Ms. Faires [a soprano] sending somewhat gothic tones into her FX boxes to influence further. The unsettling blend reminded me at times of a Morton Subotnick approach you old timers may remember. Sometimes this had a very deep space vibe until after about 15 minutes of this Xambuca picked up the acoustic guitar I assumed was for David J and he began playing some riffs that had the hint of Spain as Ms. Faires began singing actual words instead of the expression vocals she had proffered this far. She also played chords on the Farfisa while now standing. I had to admit that the last half of this set was pretty far from the abstract point of origin that it had begun with. At 10:45 it was over and I had seen two further sides to Xambuca this evening. I distinctly get the impression that the project mutates wildly for each performance. I can’t say I disapprove.

By 11:00 p.m. David J walked on the stage and got right down to business. You could have knocked me over with a feather when he opened with “Who Killed Mr. Moonlight,” from Bauhaus’ “Burning From The Inside.” I had to admit that it sounded pretty fantastic played on acoustic guitar in this cozy little club. Some of the fans of a more Gothic persuasion than myself were gently freaking out right about this time. There looked to be about 70-80 people in the club by this time and the cozy intimate vibe immediately built a bond among those in attendance. Given that David J’s has been performing mainly house concerts over the last few years, he’d definitely gotten used to the luxury that such intimacy affords his performance. This is really how music can best enter the public sphere.

And David J had also been singing alone for decades beyond any evidence in my Record Cell. Quite simply, his vocals were strong and robust with thirty+ years of roadwork behind them. Mr. Haskins was also most loquacious discussing the songs before launching into them. Many new songs from the latest album were aired, and these were inspired by the people he’s encountered in his travels, giving these songs a much different slant to almost everything else from his pen I’m familiar with. There was real affection and compassion for the portraits he was singing. How could one not love a David J song entitled “Goth Girls In California?”

I was not familiar with about 60% of the material he played, but the acoustic format meant that I could understand all of the lyrics he was singing and buy-in to the performance completely. I should point out that no earplugs were needed this evening [even during the opening electronica sets] so that was a gift that paid long dividends! I love to hear music, but I also love to hear. It’s a rare concert where I can hear the music without jamming foam into my ear canals first. It’s just more civilized this way!

He said the last time he played Asheville it was a house concert so I really missed out there. I should make certain not to let that happen again. There were interesting covers like “What’s So Funny About Peace, Love + Understanding,” “Knocking On Heaven’s Door” tucked into the set and for the record, there were plenty of his lead vocals turns from Love + Rockets that appeared in the show, to much excitement. Many of the L+R songs had [really good sounding] audience vocals added to the show and when the crowd stomped on the wooden floors of The Mothlight en masse at exactly the right moment in the middle eight of “Rain Bird,” let me tell you it was a magic moment! Mr. Haskins took it upon himself to proclaim the audience “soulful” on more than one occasion.

At certain times, he hit the distortion pedal to put his acoustic into overdrive for some welcome emphasis at just the right moments and the show lasted a crisp 90 minutes. Perhaps the best last word on the lovely event came from the two guys who were standing in front of me, high-fiving and singing along all night. One put it best to the other when exiting the club: “that had the potential to be good and was totally excellent!” Indeed it was! David J is playing across North America and beyond. Some Living Room shows are private but others are public. The public ones have ticketing available only from David J’s website so click here if interested. The regular venue shows are standard ticketing, of course.