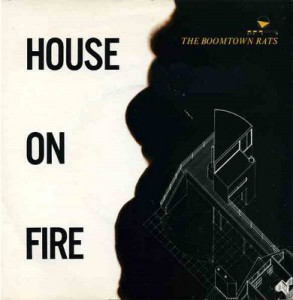 I don’t quite know what happened with The Boomtown Rats. They were one of the first New Wave acts from the UK I latched on to. In ’79-’80, I bought the albums as soon as I could. I really enjoyed the last one I bought new, 1980’s “Mondo Bongo” but that year it was like the band stepped over a line in the sand. Maybe I was listening to too many synthesizers, but the notion of buying 1982’s “V Deep” album didn’t occur to me until the late 80s/early 90s when I bought the radically different US LP of the title. Nothing unusual there. Except for “The Fine Art of Surfacing,” every US Boomtown Rats LP had undergone some US label surgery – sometimes radical.

I had heard the gorgeous first single “Never In A Million Years” when the band guested on SCTV, my favorite TV show at the time [and still waaaaay up there today] but in spite of dearly loving it, I just didn’t move on The Rats. As for this second single from the album, I remember seeing the video in light airplay on MTV during the Fall of 1982 when we finally got the channel. At the time, I was nonplussed by The Boomtown Rats taking a stab at reggae, never my favorite genre. Maybe that’s why I ignored the last two album periods of the band for so long?

I can only claim “mea culpa!” Because today, I find that the commercially unsuccessful, second phase of the band [“Mondo Bongo” through “In The Long Grass”] to be a stunning example of a successful band coloring outside of their well-established outlines to mark tremendous growth. Unfortunately, to the sound of a cricket chorus. While I was indifferent to this single at the time of release, today It’s one of my absolute favorite Rats singles. One listen to the mighty Spike Edney trombone riff that begins the song will be enough for that deeply barbed hook to remain in my fizzing brain for long hours. The 12″ mix here was a dub by Dennis Bovell from the original Tony Visconti production. Needless to say, it’s got some deep and very legitimate dub chops on display!

Bovell lubricated the opening horn riff with some wet reverb but played it drier when it returned in the song later. Pete Briquette’s tarpit bass line was right in your face, this being dub reggae. Like almost anything The Rats did after 1980 and the loss of guitarist Gerry Cott, lead guitar was severely pruned back from the sound. Even the usual dominant keyboards of Johnny Fingers took a back seat to the rhythm, playing rhythmic reggae organ lines on the off beats.

The nearly six minute dub mix began with what seemed like a 7″ edit of the track. The normal 7″ mix was 4:29 but after 3:12 the music was moved into dub by Bovell. Slathered with reverb and drops and accentuated with reverse percussion effects. The music expanded into space and in the end it kept wanting to expand far beyond the six minutes allotted to it. Those horns kept punctuating the remainder of the track and I would have preferred at least 10-12 minutes of this. If you’ve got Dennis Bovell mixing your reggae track in dub, why moderate it? After hearing this song in any form just once, my brain creates its own dub mix from the components for hours afterward! In the end, it all comes back to those horns.

Technically, I have this dub mix as one of the bonus tracks on the 2005 DLX RM of “V Deep.” The real reason why Ibought this 12″ [beyond gushing over the trance-inducing A-side] was to get the non-LP B-side. One of the many B-sides left off of the alleged “deluxe remasters” the band oversaw in 2005. “Europe Looked Ugly” started off in a downbeat fashion, almost flirting with the dub sound of the A-side, but with a far more insistent beat. Almost like reggae at double time, with a schizophrenic structure featuring minor key verses and a diametrically opposed typical, upbeat Boomtown Rats chorus obtrusively bolted on.

The lyrics were an incredibly dark use of a haggard prostitute metaphor to represent Europe. Bob Geldof talks of a tired Europe hitching up her skirt and opening her legs while  even the buildings around her were too tired to stand. Meanwhile the repulsive imagery kept coming with Geldof singing of the train that “slid by on its tracks like a steel slug on slime.” Ouch. This was one sour track. It sounded like the band themselves looked on the cover of their last album, “In the Long Grass.” Bitter and worn out. When the shock cold ending happened after a quick 2:38, it almost came as a relief to the brutality of it all.

I have many other Boomtown Rats 12″ singles from their late period, but with many songs missing from the six DLX RM albums on CD, I need to get down to brass tacks and quantify just what I need to still buy before I can attempt a Boomtown Rats BSOG of rarities; the perfect supplement to the highly flawed reissued CDs of a dozen years ago. Watch this space.