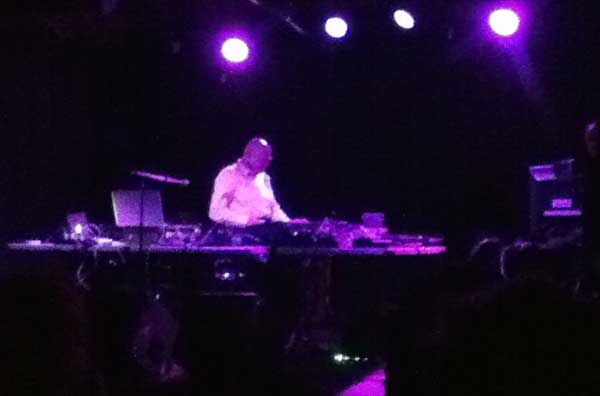 Roedelius at The Mothlight – please excuse the low light photo

I had been pretty excited knowing that Hans-Joachim Roedelius was returning to Asheville six years on from his last appearance here at the 2011 Moogfest. I had missed that show but almost immediately regretted doing so. Particularly since in the year following that appearance, I finally had bought a large selection of his music at Harvest Records. When I saw he was coming back to The States for an appearance at the Big Ears Festival, I quickly scanned the horizon for other dates and was immediately rewarded with The Mothlight show. I jumped on tickets and my wife was assured that it was something not to miss. We then got busy with life and found ourselves planning a vacation to start the next day following the show. Staying out late the night before hitting the road was so not like us, but we do what we have to.

Long have I wanted to hear this one…

We drove to The Mothlight after easily finding a parking space practically adjacent to the club in the bustling nightlife of West Asheville. The last time I had seen a show in this district, [on a weeknight, no less] I had to park half a mile away in the grocery store lot and hope there was no evidence of towing when I got back to my car. This parking kindness boded well. We entered the small club and were pleased to see that there were a decent number of seats set up on the floor. The show was to begin at 9, and though we were running late, we were no so late that we couldn’t take advantage of rock club slack. My wife got some water while I took in the merch table, which was dripping with Roedelius material. When the artist has upwards of a hundred albums, the selection for the tour put most discographies to shame. I estimated at least 15-20 different albums for sale on CD and LP. I snapped up the debut album by Harmonia, which I had been needing for many years. Cluster [Roedelius and Dieter Mobius] teamed up with Michael Rother of Neu! – I am chastened that I have not owned this for almost 40 years.

The unnamed DJ playing stuff beforehand, gave way to the opening act Xambuca by 9:30 ish. The experimental ensemble was much more than just the guy with laptop that I was expecting. The artist had also been responsible for managing the tour so he was fully bought in to the event! The band consisted of two gents manning machines with an atmosphere vocalist and a guitarist. Tonight, they were also joined by Meg Mulhearn; a violinist! So they began droning away and the presence of real instruments amid the virtual ones gave it all a depth of feeling that I appreciated. You know that This Monk is all about conventional instruments and synthetics; getting along like a house on fire. The guitarist was in particular strenuously avoiding any taint of rock with the most subtle approach I’d ever seen! The drones were defined in what felt like two movements and may have been largely improvised. It was hard to tell because this was my first exposure to Xambuca.

At a certain point, Roedelius joined the band on his computer rig at the front of the stage. He began adding freeform electronics to the mix as, over time, the members of Xambuca rose and left the stage. Making it all a seamless flow into the headliner’s portion of the evening. Roedelius manned his devices like a scientist of sound; almost oblivious to the assembled crowd, And it was a well attended performance. The venue had become probably full to capacity with all of the chairs taken and many others standing around the seating and bar area. It was good to see that this rare event was not falling on deaf ears, as I once had the distinct pleasure of being one of approximately 50 who ventured out one evening to see a [transcendent] John Cale show in a club with a 1000 capacity.

The electronica portion of the show went on for about 20 minutes after Xambuca had exited the stage. My wife later pointed out that it was a somewhat dry and clinical performance with Roedelius attending to his device settings for a somewhat remote result. To be frank, this was not exactly what I was expecting; having read interviews with Roedelius where he admitted that he was all about playing the piano these days. Much of his later albums I’ve bought rely heavily on his piano playing, and it’s quite lovely. The electronic improv on its own definitely was music for the head, if not the heart.

Then, the artist wrapped up the electronics for a move to piano. His strong sense of melody came immediately to the fore, thought the artist found himself struggling with a sustain pedal that was giving him problems. Chandra Shukla, the prime over in Xambuca, came onstage to help Roedelius who had found another sustain pedal “that had come all the way from Austria,” and it seemed to do the trick. His command of the keyboard now complete, the concert lasted for another euphonious half hour before suddenly, the artist stopped and said his goodnights to the audience. It was just about eleven o’clock, and this event was ending much earlier than I was expecting, but I was happy, since I was going to be driving 500 miles across the state the next morning and appreciated not getting in bed by the 2:00 a.m. hour that I had expected.

I have to say that I wonder if the bifurcated nature of the concert was dictated by having Xambuca as the opening act. I found Roedelius joining the opening act on freeform electronics and then their leaving afterward, one by one, an interesting gambit. Once they had left, however, it resulted in a highly abstract music that was completely aloof. The “piano” [it was actually a synthesizer] portion of Roedelius’ performance was a far more powerful connection with this listener. My wife opined that it was too bad that a full acoustic piano could not have worked for the show, since it would have, for all of its impracticality, elevated the sonics of the event.

With an 82 year old man tooling around a foreign country, the logistics of providing a real piano in each of the dates would have no doubt been beyond the pale, so we’re happy to have gotten what we did. Although, one hopes that his Big Ears set would have had an acoustic piano as benefitted its status as a major cultural event. Between the time that I first discussed this show and now, there has been a number of dates added to the itinerary, with additional ones still to happen now listed below.

Roedelius is playing tonight at the Mammal Gallery art space in Atlanta. I knew about the Orlando, Florida show since the organizers of it, The Civic Minded 5, were kind enough to contact us in the comments on the earlier post on this tour. It looks like one more show in New Orleans, and then it’s back to Europe for Roedelius… at least until that mooted Fall North American tour leg. While we wait for those dates, why not take the effort to see a seminal figure in modern music if he’s in your radius.