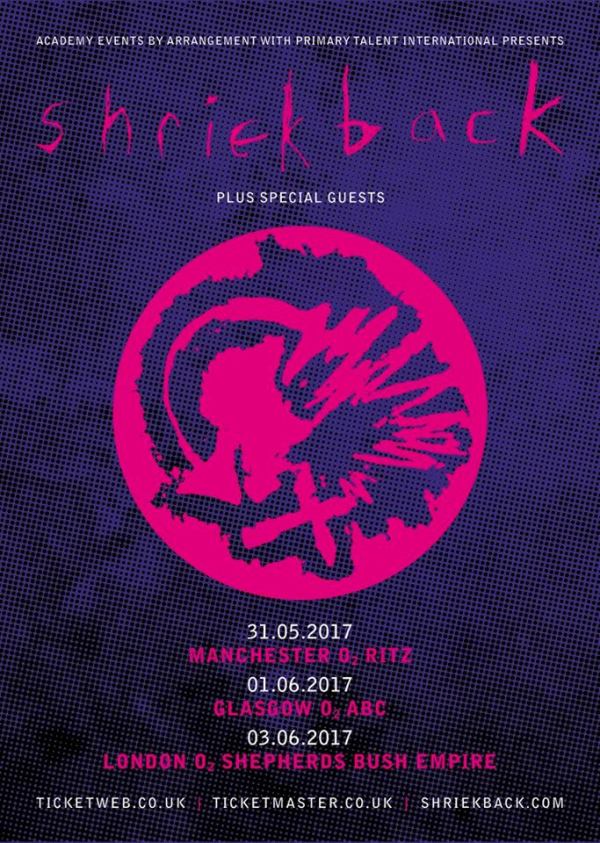 Well, we discussed the notion of Shriekback moving out into the world as a live entity and their Kickstarter campaign. Several days ago, it reached its goal and then three UK dates to kick off the UK/Euro leg of their live activity were served up, though Ticketweb only list two of the three on the poster above. The pledgers were fast and furious up front with things leveling off at about 80% with a fortnight left; when the pledges slowed to a crawl. Mr. Andrews stoked the flames and the fans responded. Of course, there are still exclusive CDs to be pledged for that will probably not get reissued for years on their webstore, if ever.

One new perk to be had, is a pre-release DL version of their  forthcoming release “The Elated World” which had its origins in a project that Mr. Andrews initiated several years ago. Namely, that Shriekback would record a bespoke song for a certain, not inconsequential, yet bargainous sum of £200. Shriekback would record a song specifically for you, one of 30 consumers to receive this offer. The sampler they released a year ago was interesting enough. These tracks were not pre-existing in any way. Well, now for a pledge to their Kickstarter of any amount over £1, the pledgee [you] will receive a DL of this project. No word as to whether it’s all 30 songs, or just a specially curated selection, but this goes far towards mitigating my populist outrage at Shriektunes being the auditory playthings of the more-wealthy-than-I set. At the very least I will be happy to kick in £5 for this DL before it all goes away in just six days. Pledge here if you’re curious. The more scratch, the easier the ride will be for this fascinating band; once again welcome on the stages of the world.