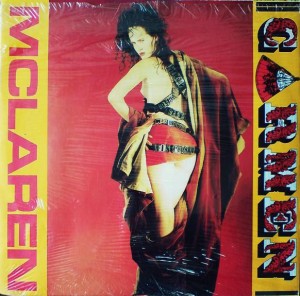 I’ll admit to being an admirer of Malcolm McLaren, though it took me quite a while to come to that conclusion. If anyone reading this were to take the opposite position, I’d truly understand. When Malc first crossed over from provocateur to artiste, I eventually bought my copy of “Duck Rock” because it was produced and created by Trevor Horn. When he surfaced the following year with an album based on opera, I could have hardly been a shoo-in to buy it. Surprisingly, when the ubiquitous video for “Madame Butterfly” surfaced, I don’t remember any naysayers. Against all odds, he seemed to have pulled it off. He made a pop dance record based on a opera. Brilliant, from a licensing point of view at the very least.

Back in the day, I bought the US “Madame Butterfly” 12″ and the “Fans” LP, but they got traded off in the Great Vinyl Purge, and a CD of “Fans” has not been forthcoming. I recently saw the UK “Carmen” 12″ and immediately snatched it up. It had been 30+ years since I had last heard “Fans” so I didn’t think twice. Seeing 12″ single worth buying in the 21st century is such a rare event, I tend to be perhaps a tad overzealous. As it turns out, the UK 12″ had only an instrumental remix to mandate its purchase. The other two songs were on the scanty “Fans” album.

The A-side was the basic LP cut of “Carmen” and I was more familiar with the song’s melody than with what had been done with it by all and sundry. The setting of the song was transferred to NYC with plenty of atmospheric sound bites over its synth-funk-cum-hip hop music bed. As usual for his “solo records” Malc himself was a minority presence on the track. The vocals fell to Angela Stone [née Brown] to carry the streetwalker sass the role required with the aria being sung by mezzo-soprano Valerie Walters. McLaren played the hapless Don José role. Perhaps the most significant credit on the recording was that of Robbie Kilgore [keys]. I have a few of Kilgore’s performances in the Record Cell, but none stand out.

The cluttered funk of this cut failed for me. It’s a shame because the melody of “Carmen” is durable. We all know it and have heard it for all of our lives. When I hear this record…in my mind, I hear rhythmic cellos and whipcrack beats, punctuated by smoky, muted trumpet solos. This music should be seductive and irresistible. Carmen drives Don José to kill her if he can’t have her. There is nothing in this music to hint at such passion.

“Death Of Butterfly” was another plodding MIDI funk vamp that went nowhere. Insult to injury, it’s on the “Fans” album too! The one track here not on the 29+ minute album was the even more cluttered and inconsequential “Carmen [L’Oiseau Rebelle] [Instrumental Remix].” This was a clumsy dub mix with added sound bites from films making a counterpoint to the vocals that were still there. It seemed that my reunion with Carmen for the first time in 30+ years was an ill-starred one. This record was simply too pedestrian to follow in the footsteps of the brilliant “Madame Butterfly” single. The biggest difference was that the earlier record was produced by Stephen Hague instead of Robbie Kilgore. That may have meant the difference. I’ve been known to be a bit harsh on Stephen Hague, but he was clearly on the side of the angels on “Madame Butterfly.” The irony was that it was his stellar turn on the McLaren single that made his name the go-to producer for idiosyncratic UK acts seeking to break The States. I can’t say why, exactly, since “Madam Butterfly” was at best a cult record here. Needless to say, OMD picked him because they loved the record and look what we got in return: “Crush.” Not the worst OMD album but the first weak one, certainly.