Record Review: New Musik – From A To B 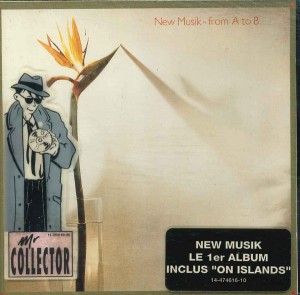 I have written earlier about how I first encountered New Musik. This review will illuminate how I encountered the band the third and fifth time. In 1981, the band had a compiltion called “Sanctuary” which was 55 minutes of tracks culled from their 1980/1981 UK albums. For many years, this was the only other New Musik record in tmy Record Cell. I never saw singles from the band, and the original import versions of the discrete albums, “From A To B” and “Anywhere” were so scarce on the ground in America, that I only ever owned them via mail order catalogues and Goldmine ads in the late80s/early 90s. Of course, by then, anything that was vinyl only never got much play in the household. Vinyl was gotten to eventually turn into CD-R once the technology came down the pike [I was waiting]. It wasn’t until our friends in the Netherlands released both albums on CD in 1994, that I really got to hear these magnificent pop records. 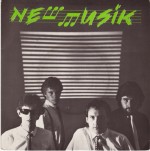 The first song on the album is a New Wave classic that I simply can never tire of hearing. “Straight Lines” is a précis of the New Musik methodology in a nutshell. 12 string acoustic guitars, acoustic drums, elka string synths, synth percussion/early drum machine, analog synths and the bright vocals of writer Tony Mansfield all coalesce into, for my ears, pop perfection. Not only did these guys know how to play and arrange, but Tony Mansfield’s songs were catchy as hell, with thoughtful lyrics that were worlds apart from cliché. The motorik beats that underpinned much of this music was perhaps the best of its era; right up there with Warren Cann’s drumming in Ultravox. Both acts used [crack] human timekeeping with the latest percussion technology available for a “best of both worlds” approach.

“Straight Lines” I first knew from its 7″ mix on the 10″ US release, but the album version was a luxuriant 5:12 instead of 3:59 with what would have been a 12″ arrangement with enhancements to the arrangement with synths firing with machine-like precision over a tightly compressed rhythm section that sounded like a tightly coiled spring on a clockworks. Sure, sure. Kraftwerk were doing the same on albums like “Computerworld,” but the difference here was the perfect fusion of machine energy and humane warmth that the songs exuded.

The sterling title cut was anther winsome single built on an irresistibly chugging rhythm bed of synths and acoustic guitar as Mansfield’s voice carried forward on an insistent one-note piano motif. “You Are Here” was a more abstract number that was still touched with lush arrangement touches that saw highly melodic synth string washes and acoustic guitars juxtaposed against dissonant, atonal synths in the middle eight. Mansfield certainly knew the value of contrast and the band’s penchant for almost McCartney-esque standards of melody [there… it had to be said] were always held in check by a technological underpinning with avant-garde tendencies. It’s like listening to the aforementioned Beatle  collaborating with Conrad Schnitzler! And it works like a charm. Forget dross like “Temporary Secretary!” This is the real thing.
“Science” was one of the three single word songs here that pointed the way forward to the next New Musik album, “Anywhere” with seven such songs that cut away the cruft and got down to brass tacks. The gentle, motorik chug of the acoustic rhythm guitars and throbbing sequenced bass gave way to an eerie middle eight shot through with minor key synths. The hit single, as the sticker on the cover of my copy revealed, was “On Islands,” the 7″ in the Netherlands. Everywhere else it was the B-side to “Straight Lines” but that song was the B-side in this territory. The lush sci-fi ballad sported vibrato synth leads that contrasted nicely with the rhythmic piano. 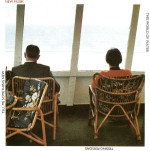 Side two began with another single “This World Of Water” and the song had fast tempo and perhaps the one sonic misstep on the whole album with a pitch shift vocal effect on the backing vocals that fall to just that side of gimmickry fortunately, the brief song makes certain no to outlive its welcome. The next track was a much better single, the prophetic “Living By Numbers” with another spoken interval with numerous voices reciting, not singing, the “They don’t want your name” lyric throughout the song’s coda.

2 Responses to Record Review: New Musik – From A To B