Four months ago, H17 let their new single for 2016 drop and I was gearing up for Midge Ure in Atlanta. It was only last week that I received a new Heave 17 email that reminded me that I still needed this record. More on that email later, but I ordered “Captured/Unseen” on the 17th and it had made the leap across the Atlantic to my sleepy mountain hamlet in just six days. Of course, it would not fit in my rural mailbox and my wife had to pick it up from the Post Office on Friday. Sigh. Thank goodness for my wife! So what’s this one like, anyway?

Well, “Captured” is a rousing slice of electropop with a durable folk music melody that seems so familiar, given a very Post-Punk coat of paint with the sturdy Roland System 100 beloved by Martyn Ware [and rightly so]. The years have been kind to Glenn Gregory and his voice has become stronger and more seasoned now that he’s been using it for 20 years of live shows that classic H17 never began to approach! Not only is the throbbing synth melody naggingly familiar, but Gregory’s backing vocal harmonies cut awfully close to something running around in my brain… but what? It’s definitely not a dance number, but they played that card on the last single terribly well, so this gives us a new glimpse of the full breadth of the H17 direction. Fortunately, for us, I think it sits comfortably next to their 1996 obscure classic comeback album “Bigger Than America” more than the hedonic followup “Before/After.”

“Unseen” was a very different flip side with a luscious dark ballad given a rich bed with the Roland System 100 percolating happily in the foreground. This could almost be a track from side two of “The Luxury Gap” but the potent spoken middle eight by Gregory as well as the general vibe actually reminded me even more of the superb work that Gregory had recorded with Stephen Emmer on his wonderful “International Blue” album of a few years back. The extended coda and spoken tag by Gregory at the song’s end definitely take the song into the luxuriant vibe of that project. The richness of the arrangement, also speaks of the great strides that Mr. Ware had made with the last B.E.F. album. This track could have fit very comfortably on either of those albums, which it must be said, were among my favorite releases of their respective years!

The one thing that differs on this single from the last one, was the political content here is slim to none. That makes me nervous, but of course, these songs may have been recorded before Brexit/Trump. I would hope that there was a lot of political content on the upcoming H17 album, since we are living in times that simply beg for their musical take on things. But taken as a whole, the four songs released in early mix form on the last two 12″ singles bode well for the upcoming H17 album. Together, they make a fantastic album side/EP already. But what of the H17 fan who wants more?

H17 have found a new way to skin the cat…

The email that I received from the H17 mailing list was not touting this 12″. That was in the past. It seems that H17 have teamed with Bowers-Wilkins, the UK audio company to bring an “album-in-progress” to public ears in more ways than the 12″ singles that they have been issuing for the last two years now. The idea was to use the sales from the webstore and merch tables to fund the album, but that’s a limited reach, yes? I suppose that’s why they offered to Bowers-Wilkins a seven track album called “Not For Public Broadcast” featuring all four of the songs we already have on 12″ single. Plus another three. 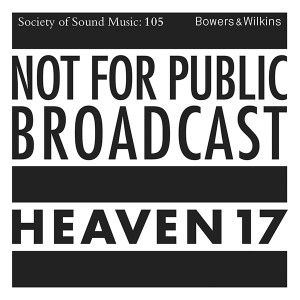 All of the songs, being a part of Bowers-Wilkins Society of Sound program, are being offered as a DL of high quality in FLAC24 format, so they will definitely sound better than the 320 KBs MP3’s one gets when buying the vinyl. The catch is, that subscribing for a year to the Society Of Sound will cost Americans $59.95. If there were other albums on offer of interest, that might not be so bad for FLAC24 DLs; two of which per month are allotted to members. It seems that most of what’s on the program are classical or folk performances, so bully to H17 for angling their way into the program. Hopefully, it will help finance their finished album, but for three more songs, I don’t think I’m ready to pony up $60 just yet. Still, it’s a potentially interesting way for the musicians these days to sell their wares [no pun intended] in the decaying, beached whale that is the music marketplace.