Posted on February 9, 2017 by postpunkmonk 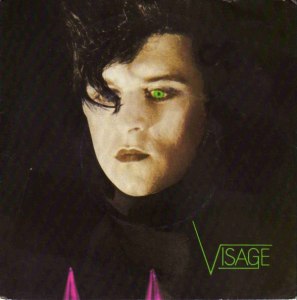 With a dive into the 7 disc CDX edition of the Visage “Wild Life” compilation/box looming large in the very near future, I felt that it was imperative to make this posting first, since I needed to get some analytical listening in beforehand. All the better to comment correctly on the provenance of the project’s components.That led me to this record and I felt that a “Those First Impressions” posting would be a great lead-in to the “Wild Life” thread.

I was ape-crazy over the “Vienna” album by Ultravox at Christmas of 1980, so by January, when a chance hearing of “Fade To Grey” by Visage crossed my path, I didn’t wait long before biking to East-West Records + Tapes and buying the Visage debut album. Then, in the Spring of 1981, I also bought the US Visage EP, and it had the John Luongo remix of “Fade To Grey” as well as two non-LP tracks, and a pair of cuts from the album. One of these was “Tar.” It was never one of my favorites from that album, but eventually I became aware that it had been released as a single prior [way prior] to the album.

It was some time in the late 80s-early 90s when I chanced upon the record in a catalog and purchased it. More on principle than any other reason. I was familiar with “Frequency 7 [dance mix]” on the “Visage” EP as well as the “Mind Of A Toy” 12″, which by now I had already purchased. I found it tedious, actually. I was happy to get another Visage record in those lean times, when my gaze was first drifting backward. This one was different, because Martin Rushent had released it as a one-off on Radarscope Records, who distributed his new Genetic label. All subsequent Visage product from ’80-’85 would have the Polydor imprint, once they signed their deal. The band had come into contact with top producer Rushent because Genetic Records had their offices just a hop, skip, and a jump from the infamous Blitz Club. Point zero for Visage. The producer found their immersion into state of the art electronics fascinating, and he let them record this single as much to learn how rock was changing by observing these young upstarts breaking new ground.

When I finally played the record around 1992, I did it only to see how “Frequency 7” differed from “Frequency 7 [dance mix]” that I sort of never wanted to hear again, actually. What I heard was jaw-dropping. What was a slow tempo, big, beat instrumental of little variation on dance mix, was a jagged juggernaut in the song’s 7″ form!  Most excitingly, Steve Strange was all over the song with his portentous vocals. Backing vocals were all vocoded just past the point of 100% intelligibility. Brutal tattoos of percussive white noise landed pummeling body-blows in the song’s middle eight.

Listening to the clanking/thumping intro just last evening, I was immediately making the leap to the John Foxx B-side “20th Century.” The first four seconds of this song seem identical to those on the equally violent Foxx song. At least in my head. I can’t believe that I never noticed this before. As to the similarity in tone and even construction details [brutal white noise percussion], I mark it down to the zeitgeist. Maybe. A year earlier, Foxx was still in Ultravox with Billy Currie, and back then he had already written what would be tracks on “Metamatic” two years later, because songs like “Touch + Go” were in the set lists of his last shows with the band. Maybe future Visage member Billy Currie was privy to some sketch that eventually saw life as “20th Century?” That’s grasping at straws, but it might be a possibility.

The climax of the song devolved into frenzied chaos as Steve Strange became increasingly bent out of shape uttering the brilliant lyric above. When he brought the song to its cold ending with the phrase “Stop it…” echoing into oblivion it had all the impact of a car crash.

I am ashamed to admit that I may have played the A-side just once, to ascertain whether it was any different from the song “Tar” on the Visage album. 25 Years ago, it didn’t seem so, but I was young and in a hurry. Now I’m old an in an even bigger hurry [for obvious reasons] but I made time to give critical listening to the 7” and LP versions of the track only to find them quite different. I don’t think that the Genetic Studios recording was remixed but that may be the answer. It sounds more to these ears like the track was re-recorded which, ln the face of it, makes sense. The 7” version was recorded in 1979 for Radarscope/Island. They then signed a contract with Polydor so I would imagine that they might have had to re-record the song for the different label label. It would have cost extra to license the master from Radarscope, methinks.

Sonically, there are some differences that are immediately apparent. The distinctive cymbal percussion hook that was so dryly precise and clinical in the LP mix sounded like it had been recorded with gating the second time. The first version found the cymbal hook competing with everything else int he track. The staging was a bit cramped. Finally, here is the definitive way to tell the recordings apart. The 7” version had piano and sax vamping in the outro, whereas the LP version eliminated the sax early, leaving the jazzy piano the remaining spotlight.

So it just goes to show that hidden treasures are always hiding, probably in your collection too, right in plain sight. I can only admonish younger generations not to be so lazy and listen to your records as if there was going to be a test later! When it comes time to compile that Visage boxed set of god®, it just grew by another track.