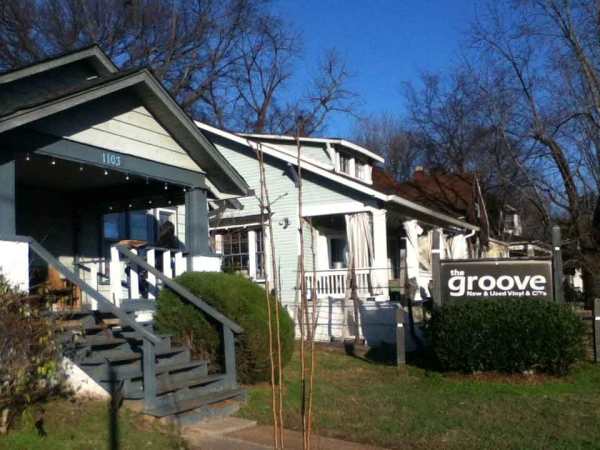 Another shocking incursion of Record Store culture into nice neighborhoods!

So, yes, I was in Nashville a few days ago seeing Midge Ure. My last trip to the Music City® was the previous August to catch Bryan Ferry. In 2010, I had visited Nashville to visit chasinvictoria and his wife, Heather, who had flew down from British Columbia for a wedding. At the time, we hit Grimeys, and I found it to be an exemplary store. The 2016 rematch when seeing Ferry? Not so much. When in town this time, I would have gone to Phonoluxe, but they have moved to a weekends only business hours paradigm, and I was not going to arrive in the city late Sunday afternoon and shop in the 90 minute window then available. No way. So I looked around for new stores and the one that was open on a Monday was The Groove. Since we ended up visiting the Johnny Cash Museum [recommended!] on Monday, the record shopping got bumped to Tuesday. 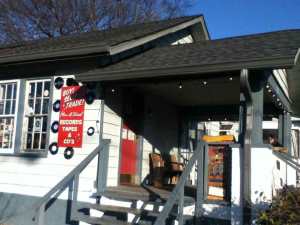 When we arrived at The Groove, I was pleased to see that it was situated in a former house in a nice, vintage neighborhood. I had run across this once earlier when seeing Repo Record in Charlotte, and I heartily approve in the movement of record stores out of desolate bombed out shopping centers and depressed formerly industrial urban locales. My friend Tom and I arrived and entered the facility to look and see what we could find. I was pleased to see that this would be a store that new and used vinyl and CDs as the sign stated, but in what proportions?

As it turned out, very comfortable ones. The store neither was overridden with new vinyl nor bereft of CDs. There were 7″ singles, new and used LPs and CDs. There was even a sale section of new CDs! We started at the CDs and I found more CDs that I had to thrust into Toms hand than my own. I managed to get very inexpensive copies of The Virgin Prunes “Heresie” and “Resuscitation” by Adult. I looked at the new CDs but I missed seeing any of the titles that were high in my want list. Pricing here would be fair or better all around, no matter what we were looking at. 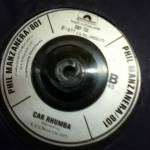 I then noticed the 7″ singles and found lots of nice things that I rarely or never see! The first thing of note that I saw was a Phil Manzanera/801 single of “Flight 19” b/w “Car Rhumba,” but I only just got the first 801 album and I don’t have the second one, so I was unsure if I should have bought this. Sadly, I put it back. I later did the research and found that “Car Rhumba” was a non-LP B-side! Ouch! 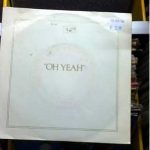 I quickly found a German 7″ of Roxy Music’s “Oh Yeah.” Not the sort of thing one sees every day in This Fallen World! I had the UK pressing, so I gave it a pass. There was a nice cache of Graham Parker and the “Stupefaction” 7″ was there, but I glommed onto a previously unseen US 7″ in blue vinyl with UK style hole [?] in a nice picture sleeve. The B-52’s US singles were notorious for mot having much in the way of B-sides, but those picture sleeves are almost enough to make me bite in spite of it. “Private Idaho” was there in it’s blue sleeve, but I passed. I then found something I have just been looking into.

I remember hearing about the Britfunk band Funkapolitan, but I can’t say I ever say and vinyl action. I have recently been researching for purchase on Discogs, and here was a 7″ begging to be purchased! The bonus tracks for the eventual DLX RM of their one album begins here. The store’s one achilles heel was that it was mighty thin with 12″ material, but that’s pretty common now [sigh]. The one thing I am most attuned to is the one thing that apparently is not being purchased at record stores that still sell used stock – 12″ singles. Especially import 12″ singles. If I do see them lately, they are all domestic hip hop material. Sigh. 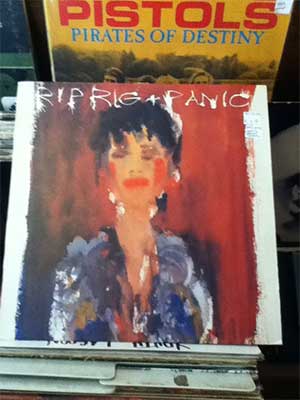 Finally!!! After 36 years of waiting!

I next moved to the used 12″ vinyl and was almost immediately rewarded with a pair of 12″ singles that I had to buy. There were two Rip Rig + Panic 12″ers to be snatched up. First of all, the holy “Bob Hope takes Risks,” about which I have waxed eloquent previously here. This copy is not exactly needed in the Record Cell; I have the 2010 DLX RM of the “God” album on CD which has this material as bonus tracks, but I bought it on the abject principle of the thing. Besides, if I ever find myself DJing at any point in my life, I’ll need this… to blow minds. They also had another Rip Rig + Panic 12″ from their second album period which I did not have in other formats in the Record Cell. It was the “Storm The Reality Asylum” twelve inch.

We had enough time to view all of the stock since our spouses had taken the car for a different shopping trip. I ended up getting a nice handful of music, with a few hot button items in the mix, all for a modest outlay. I can’t know the churn rate here, but there was enough pleasing stock to think about another visit back to The Groove if we find ourselves in NashVegas again.