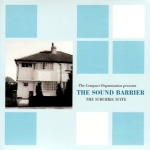 Last week a CD arrived in the mail that I only recently became aware of, and it got me thinking on an interesting tangent. The album was The Sound Barrier’s “The Suburban Suite” and the main reason why I was not aware of it earlier, was that it never existed during the time of its recording, except in the limbo for orphaned albums. Albums that while recorded, never actually get a release in their time.

This instrumental “jazz” combo recorded their album in 1985 and the implosion of their label left the masters unreleased for another eleven years. The “band” was in fact Tot Taylor and the Compact Organization’s “house band” [Paul Bultitude and the… usual suspects] were The Sound Barrier, in spite of the [presumably vintage] teen combo pics adorning the sleeves of the two singles [“Fasten Your Seatbelts, We’re Off To Suburbia” and “Excerpts From the Suburbia Suite”] that managed to barely sneak out before The Compact Organization called it a day.

This CD was released, finally, in 1996, once Taylor had a leg up in reviving the Compact brand with a series of much awaited [by me, at least] reissues of the Compact canon on newfangled compact discs. In 1996 I was far too busy getting married and such to notice these musical events, so it came as a delightful surprise when I came across evidence of this album finally reaching the ears of the loving public. But not without a price.

Taylor indulged in some historical revisionism and remixed the entire project, meaning that if one had the three tracks available elsewhere, what greeted the ear on this particular CD was substantially different. The remix made the material sound less thin and, uh, thrifty. Aware consumers of the Compact Organization, will want all variations, of course!

Another, even greater orphaned album, also from an idiosyncratic UK indie label [Stiff] once again reached the public in a new form eleven years later in spite of being shelved. This time, in its original form. I had loved the Department S single “Going Left Right” from 1981. I bought it and waited for the album. And waited… and so on. Apparently, sales of their three singles failed to ignite the charts top the degree that Stiff required, so the completed album “Sub-Stance” was left to twist in the wind while Jona Lewie and Tracey Ullman delivered hits to the label.

That was a pity, since producer David Tickle was at the top of his form in 1981 and he was met by a band with no shortage of ideas and enthusiasm. I chanced upon this CD as one of my first online purchases, when I chanced upon a website that dealt in overstock books and CDs. This was the mid-80s and it may have been what morphed into Overstock.com eventually once the web went mainstream. Here the original album in its mooted running order was appended by appropriate B-sides to fill out the program. It’s a real head scratcher how an album this vibrant and exciting was declared “unfit to release!”

Finally, the créme de la créme of orphaned albums in my Record Cell just has to be the long-unreleased fifth album by The Associates, “The Glamour Chase.” The recording of this album was a painful, incredibly expensive undertaking by WEA which was, in fact, recorded twice after the first run was deemed unmixable. It didn’t help that singer Billy MacKenzie saw fit to  indulge in any tactics to spend label cash for what seemed like the hell of it. After the two pre-release singles failed to even limp onto the lower reaches of the charts, WEA came to the notion of disengaging before any more money was thrown down the black hold of distribution and promotion.

Of course, The Associates fans had long had access to dupes of a pre-release cassette of this title, and members of the Associates mailing list had set up a CD tree to ensure that anyone who wanted to hear this at least had the chance. But after Billy MacKenzie committed suicide in early 1997, the parent labels, perhaps inevitably, turned their attentions to working that action, and a plethora of posthumous material surfaced on several labels. WEA weighed in with a double CD box of 1984’s “Perhaps” and “The Glamour Chase” as the last two albums MacKenzie recorded for the label finally reached the public on CD. The latter for the first time ever, in more than a cassette tape dubbed several generations down. The production by Peter Henderson, Dei Zwei, and Yello’s Boris Blank veers all over the road, but the material runs the gamut from good to great with some stunners finally reaching the public’s ears after 14 years.

The passage of years and the violent turnover of record label personnel has a lot to do with how albums deemed “unreleasable” can can within two or three label mega-mergers cross the “what the hell, it’s paid for” threshold. Sometimes, it’s just that the exec with a vendetta against the artist who goes through the revolving door of label execs and their replacement may just not care about anything but exploiting assets. So here’s hoping that legendary recordings by your favorite artists will see release at some point down the line. What orphaned recordings have you enjoyed after a long wait?

5 Responses to REDUX: The Eventual Joy of Orphaned Albums