Want List: Martha + The Muffins Crowdsource “The World Is A Ball” On CD

Posted on December 8, 2016 by postpunkmonk

Gloryoski! Just yesterday, I was at Pledge Music and started scanning the campaigns to see if I was missing out on anything and it transpired that Martha + The Muffins had begun a campaign to re-issue their excellent 1986 album, “The World is A Ball” [prod. David Lord] just a day earlier and as of yesterday, they were already over 100%! Now that’s results! Those who followed the Martha + The Muffins saga will know that the Canadian New Wavers, who peaked commercially at the time of their debut album with the wonderful “Echo Beach” single all over the world in 1980, carried on in their large New Wave band for three albums [“Metro Music,” “Trance + Dance,” “This Is The Ice Age”] that saw the combo becoming artier and more accomplished even as they shed members and one of the Martha’s [she left after album #2] in doing so.

Anyone paying attention to the developmental arc of those records know that by the time of 1981’s “This Is the Ice Age” they had whittled down to Martha Johnson and Mark Gane, with Nick Kent [not the UK journo], Daniel and Jocelyn Lanois adding to the increasingly complex music the band were cutting. They most closely resembled Talking Heads to these ears, with Gane’s rare turns at the mic strongly redolent of David Byrne. Lanois was just making his mark, and he was their Eno, even as he’d soon join The Master as his right-hand man moving forward. 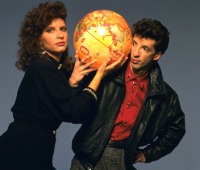 The albums from 1983-1986 were funkier. The band truly mirrored Talking Heads in that I think they reached their feverish peak on “Mystery Walk.” Its single “Black Stations/White Stations” was as scorching as anything on “Remain In Light” but where the Muffins [by then called M+M] pulled ahead of Talking Heads was with their sixth album, “The World Is A Ball.” Where The Heads ebbed and floundered to these ears post-1980, I would have to consider “The World is A Ball” my favorite M+M album. It had a well-balanced blend of art rock and pop that plateaued here. Which was fortuitous, since the band hit the brick wall following this, as Johnson and Gane took up life together and raised a child outside of the glare.

There were two more low key Martha + the Muffins albums. I have the 1992 “Modern Lullaby” but have yet to buy the 2010 “Delicate” album. The various DLX RMs have had appropriate bonus material and this one is no different. There are said to be four bonus tracks and I’d imagine that they would be as follows.

Yep. That seems to be right since there were no other singles that I can see. I had the German LP pressing but I have yet to obtain these singles, so the CD DLX RM will be most welcome. For once, there will be no range of colored vinyl LP editions forthcoming! the band are offering just CDs [and DLs, of course] this time a=out and it feels so right! After all, if anyone wants the LP, I’m sure there are copies to be had for chump change [checks – yep!] The band are keeping this real, and pledgers can buy a DL for just $8.00. A CD will set you back $21…$25 if you want it signed. Pledge here and pledge often!

The band have a wide range of extras out there. One can get CDs of earlier DLX RMs like “Mystery Walk,” “Danseparc,” and “Then Again” as well as Martha Johnson solo albums and the last Muffins release. All priced modestly. There are buttons and t-shirts, but the graphic designer genes were most fired up by the sale of Chromalin proofs of earlier album covers. Most are already gone, and they are the priciest things here [as well they should be], but if I were made of money [and really fast on the draw] the $147 Chromalin proof of the gorgeous “The World Is A Ball” cover would be so suitable for framing. In its uncut state, of course!

7 Responses to Want List: Martha + The Muffins Crowdsource “The World Is A Ball” On CD