Posted on December 7, 2016 by postpunkmonk

Since it’s December 7th, thoughts turn to Pearl Harbour. No…not that one! The femme rockabilly artist who started her career in New Wave before finding her true voice a year later. I first heard Pearl Harbor + The Explosions in 1979 on WPRK-FM at the dawn on my college radio consciousness. Their boppy tune, “Driving'” seemed to get a lot of airplay there, but frankly, it did little for me. I was looking for a little more sauce with my music.

I got it the next year [1980] when PH+TE suddenly imploded, leaving Pearl Harbour free to move to England, marry Paul Simonon of The Clash, and issue her debut solo album the very same year! In late 1980, I was listening to either WUSF-FM since I was able to occasionally receive their [90 miles away] signal when late night conditions were right. I heard a rip roaring rockabilly chanteuse sinking her teeth into the song “Rough Kids,” which was originally by Kilburn + the High Roads, from whence came Mr. Ian Dury. It was great, greasy rockabilly with a joyous feel. Now this was something that I would buy.

I have owned this marvelous record ever since it was released, but the cover reveals almost nothing about it, other than Mickey Gallagher [keyboardist for The Blockheads] was charged with producing it all. The fizzing cocktail of twanging guitars and helpful servings of slapback echo ensured that I can look at this album today and remember almost all of its 13 songs. After this one, Ms. Harbour seemed to vanish into the ether as just critics and not the “loving public” took this disc to their collective bosom. I saw nothing after this, so some time in the early 90s I saw a copy of the Explosions album in the used bins, and bought a copy. On principle. I’ve yet to hear it, though.

Would that there were a shiny silver disc of this, but there’s not. Sure, sure. There is a DL but I’d sooner digitize my LP. But it’s a brief disc. Any bonus tracks out there?

Yep! “Nerves” on the B-side of the UK/GER “Fujiyama Mama” single.

Holy Toledo! Here’s another B-side I just found out about today… and scope that cover! After this, things get thin on the ground.

There were a few other singles, but all of their tracks were on the third Pearl Harbour album, recorded in Japan [and released there first] in 1983/1984 with Japanese band The Mods backing her up. I’ve heard not a note of this, but I’d give it a chance!

Several tracks here [2, 10] were singles, but I’m betting that the version of “Nerves” here was a re-recording with the producer of this opus, none other than girl group mainstay Richard Gottherer! Now I really want to hear this. After this dalliance with Island Records… crickets until 1995! 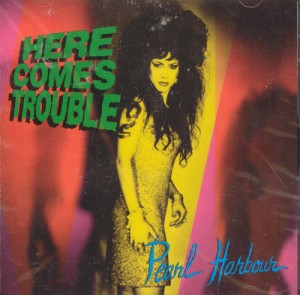 And that was all she wrote for Ms. Pearl Harbour. All the more reason for me to track the rest of it down. “Don’t Follow Me, I’m Lost Too” is the best album never released on Stiff Records, and it really shoulda/woulda/coulda been on that label at the exact moment that the label had stupidly let Kirsty MacColl slip through their fingers. As if to correct their grievous error.