Not DEVO…But An Incredible Simulation!

Posted on September 16, 2016 by postpunkmonk 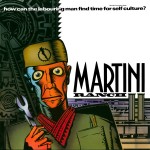 I first heard Martini Ranch when I saw the eye-popping video in 1986 for “How Can The Labouring Man Find Time For Self Culture?” by the brilliant photographer/director Rocky Schenck. Little did I know that I was seeing a virtual white paper on the aesthetics of director Guy Maddin, who got there second. That single hit like a ton of bricks because it showed that someone still remembered DEVO. Not only was the general thrust of the song close to DEVO territory, the jerky, hyperkinetic brand of the synthpop it proffered was swimming in DEVO DNA. Literally. Not only did original drummer Alan Meyers play percussion on the track, but Bob Casale [“Bob 2” r.i.p.] produced and engineered the song and Mark Mothersbaugh programmed the Fairlight CMI. Hell, it’s more of a DEVO record than the actual ones that followed it on Enigma Records, which lacked the crucial Meyers touch.

Not only was Martini Ranch enlisting the spud boys to aid them in launching at a time where they were at loose ends, but the duo had roots deep into Hollyweird itself. Leader Andrew Todd Rosenthal was the scion of a soundman at Glen Glenn Sound but backup on the duo was cult figure Bill Paxton, who by 1986 was already all over my cultural radar in films like “Terminator” and  “Aliens.” Little did I know at the time but Paxton also directed and starred in the music video for Barnes + Barnes’ Dr. Demento classic “Fish Heads,” which was a more reliable outlier of the tone of this band than his action film portfolio. I should have bought the 12″ single immediately on release in 1986, but I waited for the full Martini Ranch album to follow two years later.

The opening track was the DEVO-goes-Bollywood dancerock of “New Deal.”Another New Wave x-factor to this album was the involvement of the wonderful Cindy Wilson of The B-52s, who were on hiatus around this time. Zappa cohort Partick O’Hearn [whom I only knew from the New Wave/Jazz fusion combo Group 87 at that time] contributed both fretless and pop bass to make this cut an 80s style overload of sorts.

The second single was the considerably less interesting desperado tale “Reach,” which was notable mostly for having a James Cameron-directed music video that was not a tenth as interesting as the “Labouring Man” clip had been. The cast of “Aliens” cameoed in many roles there but the strangest aspect of is were the Morricone-esque whistling hooks as performed by… Judge Reinhold? I later got a 12″ of this recently just to have a complete Martini Ranch collection, but it’s actually a missable track. Only the vocal characterizations from Paxton are the least bit interesting.

“World Without Walls” was a borderline tepid song that came alive courtesy of the additional talent on loan there. Cindy Wilson’s vocals [she basically duets with Todd] are as ever, a wonderful thing, but Mark Isham also contributed some sweet trumpet/flugelhorn solos at songs end that stuck in the cranium. Thus the DEVO/jazz fusion character of the album had fully manifested by the, only to be followed by the most DEVO-like track on the album, “Fat Burning Formula.”

To begin with, the opening exhortation of “kiss the fat goodbye” was uttered by none other than Mark Mothersbaugh, while the synths and drum machine were very much like the spuds in feel. Then there was an instrumental  four bar measure following the first verse that was perhaps the ultimate distillation of the DEVO sonic ethos with their brand of whipcrack/popcorn percussion playing off of stentorian orchestral stabs that I simply want to loop and listen to for hours at a time. Listening now, I get the feeling that this was what DEVO were aiming for in 1984, but crucially failed to achieve. Mothersbaugh came back at the end to deliver the tag but not before Bud Cort [?] had his stab at the mic. It’s a goofy, silly song, without even the hint of the dark undercurrent that exists in even the worst DEVO material, but it has that sound down cold.

“Side two” got started off with an even goofier piece of sonic cartoonery [is that a word?] called “Hot Dog.” This sample-happy piece of synth-funk fluff was undeniably catchy. So much so that Sire had green-lit a 12″ mix by producer Ivan Ivan that eventually surfaced on volume 2 of “Just Say Yo” later that year. The goofy, sproingy track also benefitted from some terrific Cindy Wilson backing vocals, where she managed to make the “give the dog a bone” nursery rhyme sound rather torrid.

The last example of DEVO devotion manifested on “[Brother] Take It Out” which once again sounded like something that the spuds should have committed to tape once they regrouped on Enigma later in the year. The stuttering, five beat drum hook that sounded like gunfire is not something easily forgotten, once heard. This is one that I would have really liked to have heard a 12″ mix of as the song is under the three minute mark, but better to leave them wanting more, I guess.

The closer “Power Tools,” is the one track that had the actual content of DEVO  inhabiting its dancerock grooves. It stood here as a spiritual relative of “Beautiful World” with its sentiments of “power tool… in the hands of power fools.” For a few minutes in 1986-88 it almost looked like Martini Ranch might almost be the spiritual heirs to the spud boys, who had gone missing and off Warner Brothers label by that time. There were 3-4 tracks here that managed to get that devolved head of steam up to suitable levels, but the group never sold squat. This album and the two singles [apart for the remix on the Sire sampler] were all that Martini Ranch managed to release. Andrew Todd Rosenthal went on to score loads of television and film projects in addition to being one half [“Ice Berg”] of Hebrew rappers Members of the Tribe. And Paxton managed to bust the bronco of fame and fortune as a well loved cult character actor who can transition to the lead when called upon. But it looked like they might be contenders for the spud throne, were it not for another artist who hit even closer to the target… and earlier to boot.

2 Responses to Not DEVO…But An Incredible Simulation!