Posted on September 13, 2016 by postpunkmonk 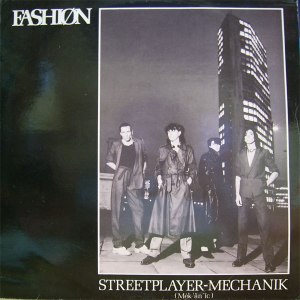 After hearing the first Fàshiön Music album, “Product Perfect” back in 1979, I didn’t expect to hear them resurface again three years later as a completely different band, but one afternoon when MTV debuted on my cable system to my enrapt eyeballs and ears, I saw the video for “Love Shadow” that had the band now making sophisticated synth-funk complete with gratuitous∞ Gina Kikoine guest vocals! I glommed onto a copy of the UK 2×12″ of “Love Shadow” and a surprisingly long time later [a few years?] I bought a LP of the second album, “Fabrique.” It became a late-in-the-game favorite of mine for 1982 as the 80s ended for me. The next decade, I spent my time and effort in completing my collection of all of the singles from this Zeus B. Held-produced opus. “Steeetplayer-Mechanik” is but one of them.

∞ – can there really be such a thing?

The Münich technothrob of this one in its [audiø extra]” 12″ mix was unbelievably strong with this one; opening as it did with synth bass that soon got overlaid with Simmons drums and vocoded as well as whispered vocals that were as sleek as a Maserati. The squelching wooshes of synths added   tension to the motorik rhythms that the song rode upon through the Berlin streets at night. Singer De Harris’ angular guitar licks added to the immaculate poise of it all. I was in awe at how producer Held was able to fuse an analog funk band with what sounded like a king’s ransom of almost grotesque levels of high technology. Maybe only the music of Japan, ca. “Gentlemen Take Polaroids” sounded remotely like this as exemplars of just how far technology could go in crafting complex, yet hook-laden dance music to sate the brows the most discerning of jazz aficionados. The 12″ played out for a glorious 8:23 since any shorter would have implied that this luxury had been moderated. A serious no-no in my book.

The dub mix of “Mutant Mix Mechanik” offered another 7:13 of instrumental dubmix that allowed the almost Mororder-rich instrumentation to glint gloriously in the early morning moonlight.  The synths and rhythm instrumentation rise and fall in a give-and-take battle for supremacy here. Of times, just a machine rhythm left as everything else has been dubbed out. This gave every element of the mix a chance to show off magnificently.

The B-side here was a brief dub mix of “Dressed To Kill” from the “Fabrique” album The dub allowed the spherical bass synth to take early spotlight before the funk guitar of Mr. Harris  took the opportunity to politely go nuts. I love the dubbed in vocal hook of “dressed to kill!” as the only vocal complement following the descending synth hook. The Chapman Stick-like synth hooks I heard among the sound of squealing tires mixed seamlessly with screams attain an otherworldly sense of dread for this quivering slice of matte-black nite-funk. The Fashiøn vibe on this single was to skirt the edges of a rushing, decadent delirium of electric funk. I consider it a crime that I never once heard this band and period of music played in a dance club. 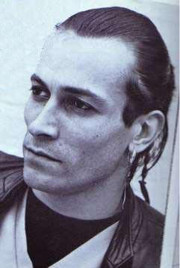 Fashiøn of this album period is an unsurpassed pleasure that always thrills me to no end when I indulge. I have each of the 7″ and 12″ singles from the “Fabrique” album and have been pencilling in the long-waited REVO edition that will encompass it all, but wait! Just this lunchbreak, I have learned that vocalist De Harris released a solo single in 1987 of a new version of the by then five year old “Love Shadow” single on UK Arista in 1987! How did I not see this all these years earlier? The 7″ and 12″ of this are now at the top of my want list with select few dealers in the world trafficking in the desired singles. I’ll have to get these, and soon!