My Tale Of Turntablism

Posted on September 9, 2016 by postpunkmonk

Right now is a rare time in the Record Cell in that there are recent vinyl acquisitions that I’m definitely not listening to. For a very practical reason. My Pioneer turntable is in… the shop!! Moreover, it’s been in the shop since the 27th of August, and it’s likely to stay there for over another month. The stereo repair shop has quite a backlog of at least six weeks, so I’m resigned to my vinyl-free fate for the immediate present… but let’s start at the beginning. 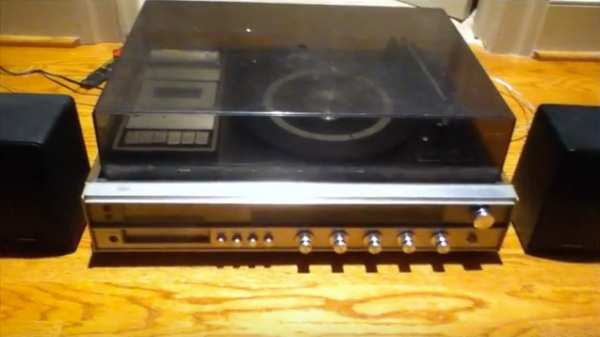 My first turntable which was stereophonic [I’ll spare you the AC/DC portable mono unit I received for my 10th birthday and used from ’73-’78] was a generic, cheap BSR unit incorporated into this all-in-one Sears stereo [above] that I cut my musical teeth on, dating from 1978. It was my primary record player from the summer of 1978-1984. It was in the Year of Orwell when I finally thought to upgrade the turntable as I had with the all-important cassette deck three years earlier. Frankly, the cassette deck was the weaker link in that Sears stereo and the Akai deck I moved to was a huge step up, but I digress. This is all about the record players today. I went to a nearby stereo store and bought a Sansui P-D10 direct drive turntable which was my record player from ’84-’97. 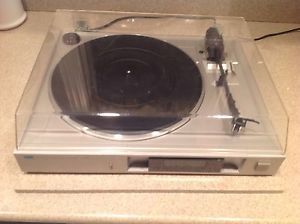 I think I got it for about $90 and it was also a nice upgrade from the Sears unit, which by now was only being used for FM and operating the new cassette and turntable which I had wired into the main stereo. Since the Sears had cassette/8-track recorders, FM, and LP playback [what else was there in 1978?], there were no aux inputs. I had to rewire everything. There was nothing wrong per se with my Sansui direct drive unit, but in the 90s when my wife was hitting the estate sales to populate her booth in the antique mall, she came across a Pioneer PL-518 for $10 at a garage sale and she wisely bought it at what was probably the nadir of record players in 1997. It was a nice trade up from the Sansui and it’s been my turntable ever since. I upgraded the cartridge and stylus along the way and it’s been a fine unit for my modest budget. 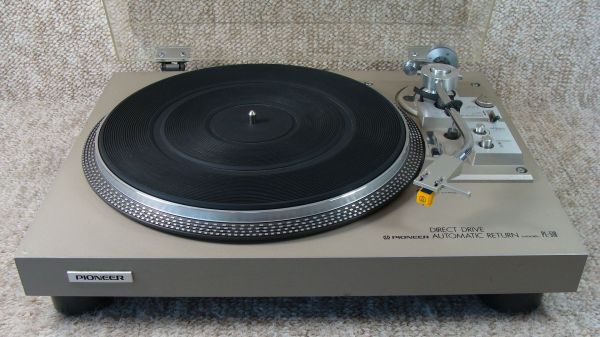 I only had the turntable for a few years before the first issue manifested. The spring loaded isolation feet also had a problem as the rubber casing eventually dry rotted, meaning that the turntable was no longer isolated from vibration. There were all sorts of esoteric recipes on the web for effecting a repair as well as third party replacement feet that ranged from $6-$1,150[!]. As I was already rendered immobile by the expanse of choices and price points [most of which were well more than $100] I effected the cheapest repair of all – sitting absolutely immobile when playing records in the Record Cell.

The problem it is in the shop for had now first manifested in the early century after we moved to Asheville. When I then tried to digitize vinyl around 2002, I noticed that the turntable, on rare occasions, had trouble maintaining speed. I’d have to compensate with the speed control, and eventually the speed would stabilize as the stroboscope revealed. That was then. Over the years, I found that once the speed stabilized, it would generally stay so for the duration of the play. Cuing up the stylus and setting the tonearm in the cradle would erase the magic, and the next time I tried to play a record, I might have to start allover at stabilizing the speed with the adjustment control.

The speed drift problem has worsened with time until the last week I had it at home. I tried all week to hear a Robert Palmer 12″ single to no avail. I could not play that record for love or money over two hours over two nights of trying without some dramatic shifts in speed rendering my digitization moot. I knew it was time to get serious and see if a repair could happen.

Looking up the issue on the web seemed to point to the age of the electrolytic capacitors in the unit as the likely suspect. I read tale after tale of the chemicals in these components aging and deteriorating over the decades so that the ability to hold speed was eventually lost. There was a plethora of such stories on the record-geek web. It’s even common to find dealers in vintage turntables reporting that they have replaced all capacitors in the unit before resale. As for me, I didn’t want to invest in a desoldering gun and heat sinks for this repair. More importantly, how would I buy the right capacitors? Radio Shack®, which I had depended on growing up for all manner of electronic parts, had been a shell of its true self for almost 30 years going. They were little but a glorified phone store for a generation and the last time I wasted my time in one, there were no longer any actual parts sold any more. One can’t just drive to the friendly, neighborhood Capacitors-R-Us® and load up. No, this was one for a steely-eyed, flat-bodies professional.

A check up with Angie’s List later and I had a source for the repair. StereoMan came well regarded on Angeie’s List and a quick call to him revealed that the minimum charge for repairing the turntable was a scant $37. The owner chuckled condescendingly when I posited the capacitor theory. “Do you mean to tell me that there are lies on the internet?!” I exclaimed incredulously. StereoMan seemed confident that the speed control potentiometer was oxidized and that a solid cleaning should be enough. I’ll report back with my findings once the deck is back in house. In the mean time, any blogging will have to center on digital music.

7 Responses to My Tale Of Turntablism