Posted on August 4, 2016 by postpunkmonk 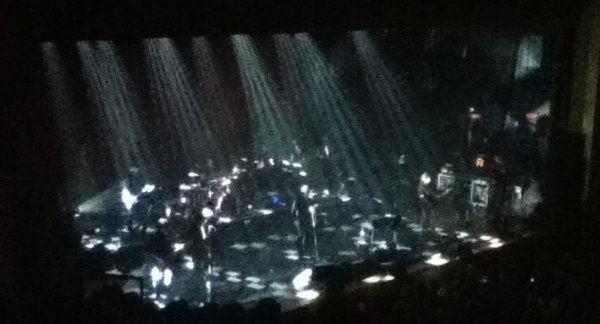 Ferry at the Ryman Auditorium

part one: A Tale of Two Ferrys

It was the best of times; it was the worst of times. We made our way to the Ryman after a wonderful dinner that caught us a bit short of time. As we hastily parked and made our way into the historic Ryman, we were confused by the difficulty in entering the building. When inside, the flow into the auditorium itself was severely moderated by many strategically closed doors that slowed down entry. Merch was only for sale on the second floor and the line for the single table was one of the longest I’ve ever seen; perhaps attributable to the modern penchant for paying with debit cards. I recall the golden days when it was cash only and the lines used to move a lot faster. We went to our seats first since it was 12 minutes to showtime. We found our balcony seats and after trying them out, I decided to see if I could buy the items I wanted from the merch table.

I had eyed the limited edition “Live 2015” 2xCD only sale here and on bryanferry.com. The tourbook looked like the most substantial one I’d ever seen [1/4″ spine!] and the tourdate shirt design had my name on it. While I was in line, my wife came to see me and told me that there was a 2nd set of drums up front so there was going to be an opening act in spite of no information anywhere on the web or otherwise when we attempted to discern this up front. She went back to the seats and I eventually bought my selected merch. I dropped some serious coin as I had at OMD last month, but hey – it was OMD and Bryan Ferry! Not chopped liver and certainly not every day.

After chatting amiably with the couple in line behind me, I made my way back to my seat. We had balcony seats, back row, but the sight lines weren’t bad at all. I can’t say the same thing about the comfortability of the seats/pews. It had been built originally as a tabernacle. I barely had room for my knees to fit in, and I could not have my legs straight in the seat in order to fit. The Ryman was similar to the Tennessee Theatre in Knoxville in that it was a wide, shallow venue with a wide stage. However, it was far less opulent/comfortable than that venue. Viewing this show would prove uncomfortable in the long term.

The opener, LP [Laura Pergolizzi] had already gotten underway with her set. She had a big voice, reminiscent of Rachel Sweet or early Lauper. My wife called her a “country Patti Smith” but she was not too far down the Nasvhille road. Her sound was more pop-rock than that. Her band was a simple three piece and she occasionally played uke and had a strong line in whistling; especially on her Morricone-flavored number “Death Valley.” As Ferry/Roxy openers go, it was a lot better than Rufus Wainwright whom we last saw in 2001! After 30 minutes, LP was off the stage and leaving them wanting more.

After a half an hour down time the show began with Ferry and his band taking to the stage with the powerful title track of his new album, “Avonmore.” The large band included a pair of  long-term Ferry veterans [Fonzi Thorton, Neil Hubbard] but many more newer, younger faces. Even recent musical director/keyboardist Colin Good was missing in action.  I had hoped that the title track would get played this night but the driving Krautrock-influenced number that required over five minutes on album [and I wanted more even there] was cut short to a scant three minutes this evening. Repetition was necessary for the song’s impact, but it was cut short here abruptly, and “Driving Me Wild” had begun before I had grasped what had happened. Hmm. While I was excited to hear the song, its treatment at the hands of Ferry did not bode well. Little did I know that this would be the dynamic for much of the show.