Posted on August 1, 2016 by postpunkmonk 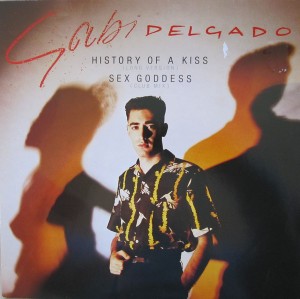 While I only have D.A.F. music on compilations, their imperial period on Virgin [now licensed by Mute, which makes sense] has long been in my sights as something that one day, I must investigate further. With that in mind, almost three years ago, when shopping in Georgetown for records with the illustrious Echorich, I ran across Gabi Delgado’s solo album “Mistress” as well as a 12″ single from said release, “History of A Kiss.” Hedging my bets that there was a CD of the latter, I bought the former with my finite cash. Nearly three years later, I finally listened to the thing! How was it?

“History Of A Kiss” begins, strangely enough, with a funkdiskovibe and sound effects that suggested the opening to Marvin Gaye’s “Got To Give It Up!” The synth bass was deep and rubbery with Jake Leibzeit’s timbales contrasting against the drum programming nicely. It attained a Carribbean sound with some modest hi-life guitar rubbing shoulders with the girly backup vocals. Once underway, the track’s vibe encroached upon Kid Creole territory! Then Delgado made his appearance and all bets were off.

I don’t think I’ve ever heard a more modest vocal performance before and Delgado’s meek, breathy performance sounded like he was striving not to wake up someone in the next room as he recorded. The brass section were present on the track, but like the rhythm guitar, were mixed so low in the track that it felt close to a dub mix but without the boldness that makes for great dub, Simply put, this is one of the strangest productions of Conny Plank I’ve ever heard. He usually rolls a strike, but this was a rare example of a spare from Germany’s greatest producer.

This was all as modestly charming as I’ve ever heard, but then the B-side began and in comparison, the A-side [not extended from the album, by the way] began to take on a vastly superior character. “Sex Goddess [club mix]” was not anything that makes sense to my ears. The quirky track also had a Gabi Delgado who was as modest a presence on his own record imaginable, but the arrangement of this cut was fairly random and it came close to sounding like Rip Rig + Panic, if they had no groove whatsoever. This was certainly the least danceable dance music I’ve ever heard.

The ladies singing backing vocals interject “Body!” at random intervals throughout the song as it trundled along, with only the frantically popping bass of Raoul Walton [ex-Belfegore – how long has it been since you’ve thought of them?] and the rhythm guitar of Stephen Wittwer providing any forward momentum.  The horn section jabbed in at random intervals, occasionally adding a jazzy flavor while Kraftwerkian rhythm loops signaled the song’s middle eight.

There was a reverse boomerang dub section and the club mix of the track got underway with random interjections of riffs and elements [sounding like they were culled from a half dozen other songs by other artists] added to the chaos of it all. For the last half of the track Delgado was rhythmically murmuring something under his breath as he became more agitated [as much as anyone can sound agitated while whispering]. The rhythm programming recalled “Tour De France” period Kraftwerk but even Kraftwerk’s worst efforts had an integrity that was massing here. This sounded random and labored at the same time!

This cut was one of the strangest, least satisfying dance records I’ve ever heard. I’ll say one thing for “Sex Goddess [club mix];” it managed to make the A-side sound like genius in comparison. Coming from the vocal half of DAF, I expected at least competence. This sounded less than that. I was most chagrined for Conny Plank. It’s one this for the singer of D.A.F. to let me down. Conny Plank, on the other hand was a major presence in the Record Cell. This is one I will probably let go, and I need not worry about tracking down that JPN only CD of “Mistress,” the album from whence these tracks came. I have much better uses for $50+!