Twilight had just begun as OMD’s set was underway…

Given that the venue had a 10:30 p.m. curfew, there wasn’t much time between the band’s sets. The team of steely-eyed, flat-bellied professional crew did their best to make it fly. Soon, OMD were taking it to the stage. The familiar band lineup had Martin Cooper, stage right at his Roland Fantom workstation, with Paul Humphreys, similarly set up at stage left. The difference this time was that drummer Stuart Kershaw from the post-split, pre-reformation era of the band [’91-’96] had regained his drummer’s chair following the loss of Malcolm Holmes after his second heart attack in 2013. It looks like Kershaw will be the timekeeper for the band going forward.

The quartet began their set to the energetic sounds of their iconic hit [just not in America] “Enola Gay.” That was something of a daring move as an opening song on an American tour, so my hat was off to them. OMD had five singles chart in The States, and I was certain that we’d hear each of them this evening, but the fascination was with the other tunes chosen. “Enola Gay” was the song that announced that this band was going places in 1980 that were fresh and exciting. Duran Duran famously said that they were the band to dance to as the bomb dropped but could there be a more appropriate song for said event than this one? [Okay, maybe “1999” by Prince…] This got a few of the faithful in the crowd moving in the aisles but when the series of “blasts” occur in the instrumental middle eight, it still sends chills down my spine.

The second song was:

That would be “Secret,” one of the wimpy pop songs that were Paul Humphrey’s stock-in-trade. This was a fave back when the “Crush” album first got released…31 years ago! For this one, Paul took to the front of the stage while Andy filled in on Paul’s keyboards. A good choice for a second song as it was probably more familiar tot he audience and it showed that this band had two lead singers. This long, six week tour has the band hitting lots of nooks and crannies where they are possibly unknown, so these prosaic concerns all effect the set list choices. 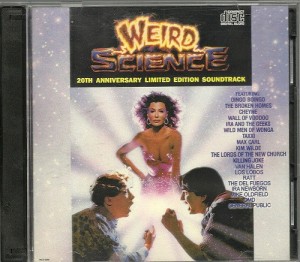 Next, Andy teased the crowd that they would next play a song from a film but it was not “If You Leave.” Even I had forgotten that their oh-so-appropriate hit “Tesla Girls” had been the first OMD song in a John Hughes film. But if you wanted to hear them on the OST, then your only choice is the bootleg 2xCD-R as seen at right that has all of the songs from the film. This was always a favorite song of mine of theirs as it had geek-cred deep in its DNA. Since we has seats at the front row where a wide aisle cut across the floor, we had plenty of room to dance to this one as the ladies of our foursome led the way. The sound that had seemed so loud during the last two numbers of Howard Jones’ set, by now seemed perfectly fine. Could it be the material?

Next came a powerhouse followup to the previous song. “History Of Modern [Part 1] is my favorite of their recent spate of singles and it’s killer classic OMD through and through. It has technopop hooks galore while being a song about the inevitable end of all existence as the universe has another singularity/big bang. Forget dancing while the bomb dropped; we were dancing to the end of the universe! It was very different circumstances from the last OMD concert that I had seen. Four songs in and this was a blast of a show. How long could they keep this up?

About four songs, I guess. The next selection was their number four smash “If You Leave” and this song, written under battlefield conditions in 24 hours, frankly shows it. Only the kitschy string patches save it from the recycling bin, but it’s not the band’s finest hour. But with the miracle of cross-platform marketing, it’s the song any American might know if pressed about OMD. At least they showed some guts by placing this mid-tempo ballad [my least favorite form of music ever] right in the middle of their set. It’s tired when the biggest hits are saved for late in the set. It’s appearance here was a good choice, as it hardly has an energy level sufficient enough to use as a set capper. I was wondering if Mr. Cooper would play his trademark sax solo on it, and he did; albeit in his traditional seated position behind his synth.

They sequenced the followup single next, which saw the top 20 hit “[Forever] Live + Die” bring Mr Humphreys to the front of the stage for a second time. I liked this song better than the preceding hit since it was another dreamy Humphreys slice of wimp-pop with some great bass pulls from McCluskey. They decided to use synth horns in place of the three-piece horn section that originally played this on the “Pacific Age” album. The band feel that the public want to hear the songs exactly like the familiar recorded versions, and I beg to differ. It would have been more interesting to hear different synth patches on this number, for example, but that’s an executive decision that is out of my hands.

Fortunately, the next track really managed to press my OMD button while actually offering something a bit new in terms of sound design. “Joan Of Arc [Maid Of Orleans]” has become over the decades, possibly my favorite single of theirs. There’s been a lot of churn over the years, but the classic OMD waltz-time tempo was never used in a more impressive piece of work than this. And the pounding tattoos of snare drums in the song’s climax is beyond stirring. Even so, the band had some extra help here when a member of Barenaked Ladies came out to add accordion to the topline melody. The song originally sported mellotron, but this was an honorable way to achieve some similar sonics. I’d heard about this being tried in earlier shows and it works like a charm, so its appearance was a definite plus.

The band next played their final two charting singles, “So In Love” and “Dreaming.” Decent melodies, particularly in “Dreaming,” but their lyrical content as love songs [for so long anathema to OMD for obvious reasons] marked their five American chart singles as a separate and distinct body of work from the songs that made their reputation with this listener. Definitely a lesser body of work, as well. As we now know in hindsight, it was the grueling slog of trying to “break America” that ended up breaking the band instead. Opening for bigger bands, constantly touring, and then having to write songs that were compromised from the ideals which they started the band with came with a great price. Fortunately, their last eight years back together have showed that they have been paying attention as they edge closer to their original artistic standards.

As if to mark their artistic path back to integrity, they closed with two more singles. First came “Locomotion” from “Junk Culture.” Caribbean electropop yet still a touch of their early lyrical abstraction. This had been their first single in the US on A+M Records, who seemed to understand them better than Epic ever did. Then they closed with their still classic debut single “Electricity.” Sure sure. It’s only Kraftwerk’s “Radioactivity” with a faster BPM, but it’s still the quintessential OMD single; poppy synthesizers and a lyric about science. With that, they were off and we hit the merch stands for some swag, but not before meeting with our neighbors at our seats, who were a friendly lot. We seemed to attract a lot of attention with our dancing and yes, I geekily wore the VIP package t-shirt from the 2011 tour I had last seen. I have no shame. But I saw more than a few of these stylish gray and orange designs in the audience so we al understood each other. Many folks were of a “wow, you guys really got into it – I thought we were the only OMD fans here” persuasion.

At the merch stand we opted for the elegant black sweatshirt with an “English Electric” design that was very understated and sleek. I was not going to buy this but my wife cajoled me into it. I was intending to only get the white “English Electric” tour design, but I ended up with both. My wife preferred the badge set, which was beautifully arrayed on a lozenge-shaped card with the EE design on it. When I got home, I saw that the white shirt had the tour dates on the reverse! I assumed that it was older stock from the 2013 tour but it was 2016 vintage. Impressive. I am a sucker for tour shirts with the date I saw the show on the back, but I had not assumed that this would be the case.

The set was the third opening act set in a series of four overall for OMD and myself. Living where I do, I don’t have much choice otherwise. For what it was, it was excellent. Five hits and four stone cold OMD classics [“Locomotion” is close to being the line in the sand] are not bad in the cosmic scheme of things. Given that it had been five years since the last show, how could I not drive a few hundred miles to see them even in an outdoor shed? It was a vastly different vibe and not my usual concert haunt by a long shot, but the crowd was good. People were enjoying OMD and not just the obvious hits. The band were tight and energetic with plenty of Andy’s famous dancing that could come from no one else. Their set was reasonably well-chosen and went the distance to honor their roots. My wife can’t understand how HoJo and OMD came to be chosen by Barenaked Ladies for openers on this tour but I am happy that it happened. As for the headliners, their first song was banal and their second, so dire, that we had to leave even though one of our party was kind of into the idea of seeing them. This probably won’t happen again, but I’m glad I took the time and effort to see this strangest of package tours. OMD’s next album [tentatively titled “The Punishment Of Luxury”] is pencilled in for a 2017 release so hopefully we’ll get a headlining tour of The States on the back of that. The band are pretty good about making sure this happens in their current phase, even in the face of hard financial realities. It’s my hope that maybe they’ll actually play my city for the first time ever. After all, Kraftwerk, Gary Numan, and Sparks have!