Record Review: The Only Fun In Town/Sorry For Laughing – Josef K 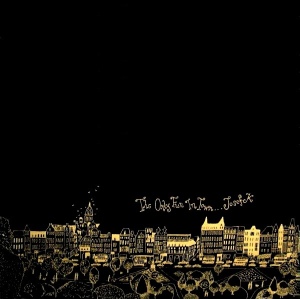 I was really late to the game for Josef K. As I barely read the UK press, and even then, only my friend’s copies of mags ca. 1983 or so, I totally missed this band when they were a going concern which wasn’t long, actually]. It was down to hearing the debut Propaganda album, “A Secret Wish,” with its cover version of the iconic “Sorry For Laughing,” before I got a glimpse of what they were about. I was fine with the Propaganda cover, and made a mental note to one day check the band out. As I waited the years for this to happen, I found it more possible to obtain copies of former lead vocalist Paul Haig’s early 12″ singles on various Crépuscule imprints.

These I soon bought at local stores [primarily, Crunchy Armadillo or Peaches, as memory serves]. They were decent dance-rock product of the early-80s.

I finally saw their debut album in a 2002 CD pressing that coupled it with their unreleased debut album that the band had preferred mothballed instead. In the intermittent years, I had obtained the Haig/MacKenzie album, “Memory Palace,” which was a release of demo material that Billy MacKenzie had recorded with his friend Haig which both were “in between labels.” It was sketchy material that showed what might have been done if they had any budget to rub between their fingers. When I finally played the CD upon getting it in 2014, I was noting how similar the vibe was here to two other bands active at roughly the same time that Josef K were on recording on Postcard.

I was definitely hearing shades of Associates ca. “The Affectionate Punch” in the arrangements as well as more than a hint of Bauhaus ca. “In The Flat Field.” While perhaps lacking the latter’s histrionics, Paul Haig’s vocal delivery was very reminiscent of early Peter Murphy’s mic attack. The rhythm section was also suggesting early Bauhaus. “Fun ‘N’ Frenzy” certainly did have a frenzied rhythm and the vocal delivery and music together came close to touching the hem of “St Vitus Dance” while “Revelation” proffered skittering punk funk not far from where “A Kick In The Eye” later ventured. Malcolm Ross’ guitar went for the jangular on this album with a frenetic, busy playing style that heightened the trebly attack of a song like “Crazy To Exist.”

By “It’s Kind Funny,” the band finally slowed the tempo somewhat. Enough to allow Paul Haig to actually croon instead of spitting out the words like bullets. As with many of their peers, the thought here seemed to by mixing punk with disco rhythms that mechanistically moved the songs forward. It fit right next to “The Angle” where the same vibe was explored, albeit enhanced with some nice backing vocals.

The title of “Forever Drone” belied it’s tightly coiled, fevered delivery.  The songs perfectly reflected the clipped emotional states on display among them. One can practically taste the enervated, metallic tang of amphetamine sulfate in these songs. Only on the occasional track like “Citizens” did Haig get to indulge in the debonair side of his delivery. The vocal style he adopted here overwhelmingly tended to emphasize and hold the final word of each line of dialog for a very rhythmic enunciation. His singing style favored the staccato, early Peter Murphy phase, though both acts were operating concurrently in the ’79-’80 period, so it’s hard to say if this was a case of one influencing the other, or maybe it can be chalked up to the zeitgeist itself. With Thatcher taking office, the winds of change would carry all of the of tension that both vocalists delivered towards anyone paying a bit of attention. These were the years in which blue-eyed, soporific soul-boy crooning was simply unthinkable. 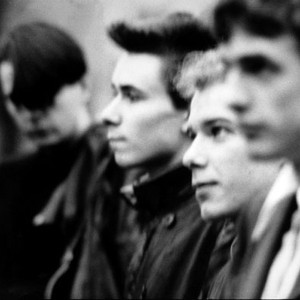 You, in the back. Steve Mackey called. He wants your haircut.

The released version of “Sorry For Laughing” couldn’t help but sound like a flexidisc next to the ZTT colossus I’ve known for 31 years. The original version was relying heavily on the slashing rhythm guitar riffs of Malcolm Ross juxtaposed against the twangy leads for a bracing effect. The ten songs here were head-scratchingly threadbare when compared to the twelve songs that followed, which were what the band originally recorded as their debut album at an earlier time. The band on the actual released LP [tracks 1-10] were ill-served by the thin, flat recording with the vocals mixed almost to the point of inaudibility. It boggled my mind to hear that the first ten tracks on this CD were not the early demos, but the re-recorded second version of many of these tunes after recording much more professional versions of what became the debut album up front. Alas, the band felt that it did not represent then adequately, so the decamped to the studio for another stab at it. The resulting session took only two days and it really sounded it here. While the songs, vibe and performance were all great, there’s something to be said for having a pro behind the desk. And in this case, the pro was Callum Malcolm at Castlesound studios! Yes, it seems crazy that a band would react against such things.

The unreleased “Sorry For Laughing” album has a few shared strands of continuity. Five songs [“Fun ’N’ Frenzy,” “Crazy To Exist,” “Forever Drone/Drone,” “Citizen” and “Sorry For Laughing] were on both albums, but the remaining seven songs were given the heave-ho to make room for other material. There was also some use of synthesizers on “Sorry For Laughing.” Not enough to be accused of joining the Numan brigade, but  apparently sufficient for a Stalinistic purge of the devices in lieu of relying on Malcolm Ross’ guitar for all of the tone color. In that respect, maybe the similar stance of Bauhaus [where synths were also verboten] was more decisively influential than I initially thought.

The material here had plenty of spark to these ears. “Heads Watch” was driven by a broken, arrhythmic pulse and the version of “Drone” was 50% longer [3:09] due to its slower pace. Ross’s strangulated,  yet crazed solo here was marvelous, while David Weddell’s bass had a rare primary focus on “Sense Of Guilt.” The martial tattoos Ronnie Torrance added solidarity to the rhythm section’s moment in the sun here. The screams at the end of the track sounded familiar. Perhaps the same in “The Associate” can be traced back to Josef K? I loved the noir footsteps adding the tension to the longest track here; “Variation of Scene,” which at 3:31 was practically a prog opus to this band!

The one track on the original album that I’d say might have been a good choice to start over on again was on the original “Sorry For Laughing.” My main beef with this version was that the song’s speed anomalies led it to vary considerably in tempo. Enough so that it sounded “wrong” to these ears. I’d perhaps chalk that song up to an experiment that should have been left on the studio floor.

The release of this CD on LTM in 1990 was, amazingly, the first release of the “lost” debut album “Sorry For Laughing.” There were subsequent pressings again in 2002 and 2014. The latter year also brought along decoupled LPs of each separate album for those who prefer such things. The band seemed to have a strong, quixotic push against success that perhaps painted them to the left of their contemporaries like The Associates, who may have shared an anti-rockist stance but without the aversion to fabulism that made Josef K, a bracing and ascetic Post-Punk experience without ever troubling the charts. I need to get some Haig CDs next. In particular “The Warp Of Pure Fun” that saw him collaborating with a post-Associates Alan Rankine. The solo Haig material that I already have suggests that after Josef K ceased to exist, he certainly overcame his puritanical reluctance towards this thing called “pop.”

3 Responses to Record Review: The Only Fun In Town/Sorry For Laughing – Josef K