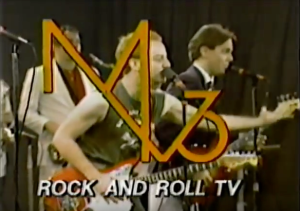 Back in 1982 a lot of music video coming fast and furious and the traditional ways of discovering new bands [radio, press] were not relevant to my non-mainstream tastes.  Music video, for a brief time, skewed the traditional US rock power hegemony towards those bands [chiefly British] that were visually literate and knew a thing or two about music video and presentation. It must be remembered that MTV had just gone on the air the summer of 1981 and were hardly seen as a sure thing. In fact, much of America, including the biggest cable markets like NYC, were largely not getting MTV carried on their systems. Old hacks like myself may remember the “I want my MTV” ad campaign that had big stars like Bowie and Pete Townshend admonishing people to call up their cable company to request they carry the channel in a series of TV ads.

There were other outlets that thrived in MTV’s wake; in some cases reaching markets that MTV would not have for years via the more traditional syndication method.  It was the spring of 1983 when a low power UCF channel in my area started carrying MV3. MV3 was a daily [!] hour-long music video program that was sort of like American Bandstand except that it was almost 100% New Wave. The show was taped in a studio that was packed with SoCal teens grooving to the latest hits as played on the influential KROQ-FM. I had heard of the station when Posh Boy started releasing the “Rodney On The ROQ” compilation albums in 1981, but living on another coast, never had the pleasure to hear it. 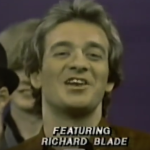 Since Rodney Bingenheimer had a face meant for radio, the show opted for the more photogenic Richard Blade, a top rated DJ at the station to anchor the show. The Brit had cannily expatriated to the US just in advance of the Anglophilic wave that soon swept America in the early 80s as a direct result of the confluence of MTV playing these British acts the radio would not touch as well as the upstart “Rock of the 80s” format that KROQ spearheaded. That Blade was a pro who knew his stuff made him a smart choice. 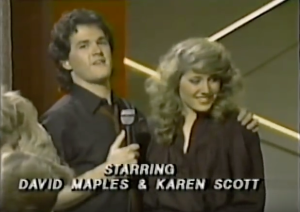 The co-hosts were a pair of kids closer to my age; David Maples and Karen Scott. Maples was a goofy Mickey Dolenz-type and Scott? Well, she had big, poofy hair as the photo at right certainly proves. Each day the show would play a video that would be keyed into a giant TV wall on the set [Director to kids: DON’T wear blue!] while the director cut between the clip itself and the grooving teens. A tried and true formula updated to the music video age. 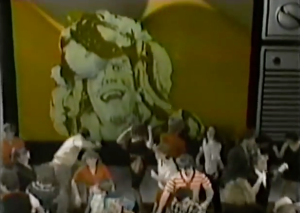 Can you name that video? I can!

All of this would have been of minimal interest had not:

I saw many interesting bands endemic to the L.A. New Wave scene like Berlin and Oingo Boingo and the interesting thing was that while they would show up and lipsynch a song or two in between being interviewed by Blade, the songs they played might be deep cuts a million years away from ever being a single! I still have videotape of Oingo Boingo playing the blistering title track to “Nothing To Fear” and hearing it for the first time there. Occasionally, there would be British acts hitting the L.A. market and showing up for a little promo. I recall seeing The English Beat and Wham! back when they still had an exclamation point [probably not their homage to Neu!].

I remember getting a handle on Paisley Underground bands for the first time here when The Bangles appeared while they were still on Faulty Products with their debut EP. Likewise, I first encountered the charms of The Three O’Clock when their “Baroque Hoedown” EP on Frontier was a going thing. They played “With A Cantaloupe Girlfriend” and reached my eyes long before “Jet Fighter” got a grudging play on MTV.

Better still, the occasional video got played all the way through without cutting to the kids dancing. Often this was a clip that was never in a million years on TV’s playlist. As a music video collector, this was the primary draw of the show for me.  Of course, what was primarily played was “mainstream New Wave” material that was hot on KROQ but had not yet crossed over to the Top 40 [but soon would]. Acts like Duran Duran and Adam Ant were MV3 royalty.

The show stopped almost as quickly as it had appeared and the hosts went their own ways. Blade has stayed involved with music in addition to his forays in acting [probably the reason he decamped to SoCal in the first place]. He remains a DJ with an old wave show on satellite radio still working that action. He compiled a great series of New Wave CDs for Oglio Records in the early 90s that were sterling examples of the form long before it became a tired cliche. Maples became a TV writer [“Home Improvement,” “Rugrats”] while Scott has simply faded away.