I have to admit that I was never one to follow the rock press very much. First of all, in America, this usually meant Rolling Stone or Creem Magazine; neither of which ever did anything for me. By the time I would have cared a whit, Rolling Stone was the establishment rock rag of coked up proto-yuppies. It was completely the music publishing arm of The Man®… that is to say if you could deign to find any music coverage in the damned thing! Most of it was specious “lifestyle” editorial/advertising with lots of ads for drug paraphernalia tucked away in the margins. Creem always looked like a heavy metal magazine that was forced to “go punk” by the early 80s. I never bothered. 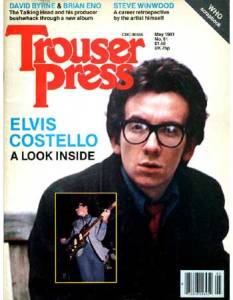 If you had tastes like mine, there wasn’t anything out there with national distribution that came close to serving my interests, until that fateful day in 1981, when a glance at the comic book section of a local Shop + Go revealed the cover at right to my questing eyes. Whaaa…? Elvis Costello and Byrne/Eno on a magazine cover? I had to drop the $1.50 I was probably planning on spending on comic books [you could buy three back then for that price] on this mag instead. It was love at first read. Here was a smart, canny read that covered almost everything I was into musically. Not coincidentally, issue #61 was the first one for the New York magazine to get significant national distribution after seven years of pulling itself up from its fanzine bootstraps into something substantial. 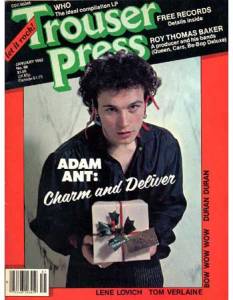 Editorially, I liked the magazine a lot. I could tell it was written by people who were much more like me than the smug hippies of Rolling Stone! There was some real wit on display, and there was an underlying sense of humor that allowed them to have a few laughs while giving the readers the straight dope. I missed the next issue, but I managed to buy every other subsequent one for the better part of a year. Then something dramatic happened. They started carrying a flexidisc in each issue for subscribers only. Naturally, I had to bite for that one! This made the mag the US equivalent of Flexipop, the scabrous UK music rag with a lock on the whole flexidisc phenomenon…until then! When subscribers got a pair of Orchestral Manoeuvres In The Dark tunes in the year when I could not get enough OMD, it was clearly the impetus that I needed to commit to a monthly subscription.

The mag had great features as well. Their autodiscographies were a brilliant conceit: gather up a band and have then discuss each album full of anecdotal detail. They had a page full of reviews of recent singles [heavy on the imports] called Green Circles where Jim Green would weigh in on the caliber of non-LP B-sides for import single cognoscenti like myself. At the very least, you got to know what tracks each single held; invaluable for making a purchasing decision! If the records were 6-8 weeks old by the time they went to press, remember; it was a slower time. It might take that long for anything I wanted to filter down to Central Florida anyway. 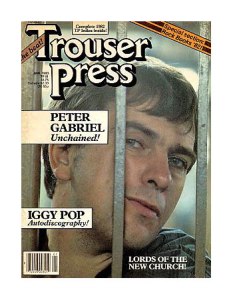 The editorial slant of the magazine was such that many acts I was a huge fan of probably got their only national press in their pages. Who else would carry a torch for Ultravox or Lene Lovich? That’s not to say that they spoon-fed me as a reader. If anything, TP [as it was affectionately known], tended to underrate many acts I was pretty big on. Groups like The Psychedelic Furs were a particular sticking point with me, with the band usually summarily dismissed to the pages of “Hit + Run” where also-ran albums deemed unworthy of more than a Tweet-length review of 1-2 sentences were ghettoized. On the other hand, they really did think that Ultravox were the best thing since sliced bread [at least until they turned on them when “Quartet” came out – which was about right]. 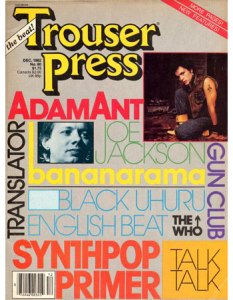 Another huge feature of the magazine was its advertising. I would find out about a lot of interesting records just from their display advertising! I also recall in that innocent, pre-Goldmine era, that there were record dealers who would run ads full of numerous singles listed in detail and using tiny 6 point type that gave me valuable discographical information in that pre-web era! I recall that I saw records that I wanted that never seemed to show up in local record stores, but mail-order purchasing was still a few years out for me. I just didn’t have the money or even a credit card for that sort of thing at the time. 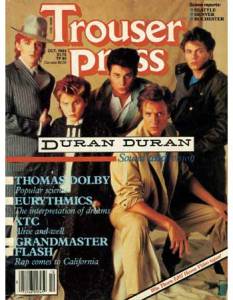 I vividly recall a review of Duran Duran’s “Rio” from publisher Ira Robbins being a full on rave for the magazine full of superlatives and praise. [He did the same for Spandau Ballet’s “True!”] The band had always gotten press in the mag years before it had been determined that putting their mugs on the covers sold a lot of copies to indiscriminate Duranies. When in 1983, the band fell of their perch in a big way, that didn’t stop them from running a now very sellable cover story on the “fab five.” What with MTV igniting the Second British Invasion of 1983, the once demure New Wave mag found itself running cover stories on the likes of Adam Ant, Culture Club, or the now fallen Double Duran as it suffered the cognitive dissonance of selling issues with cover articles about once-obscure groups that they had written short articles on earlier who had since risen to the heights of Top 10 material the world round.

In the end, the decision was made to stop running the magazine, which had been suffering from money problems as well as creeping guilt over its cover artists. The last issue was the tenth anniversary issue from April 1984. The insult to injury? I had just begun a new subscription year and would now receive almost a year’s worth of the worthless magazine The Record. Does anyone remember that rag? By 1984, with music coverage at an all time low in Rolling Stone, the decision was made to launch a separate magazine to just cover music!! I once even bought a back issue of TP at a record show in the 90s [the Gary Numan cover issue this post began with] and if I were to run across any other issues I didn’t have I would probably make the effort to buy them as they would have the allure of retro gold in this fallen era.

The magazine may have died in 1984, but in 1983, the successor made its debut. The Trouser Press Guide To New Wave Records was something of a sourcebook for the genre with hundreds of pages where TP reviews were distilled down to a few sentences and the breadth of the material was amazing for that pre-web era. I never got the first edition, but I have volumes 2-4, which dropped the then badly dated nomenclature “New Wave” from the title. These remain useful years pater, but they are OOP now. There was a Guide to 90s records as well [v. 5] but I had no interest in the music of that decade. Most of the editorial content has been available at trouserpress.com for about a decade now. Head honcho Ira Robbins still keeps the flag flying and I have to admit, I take part in the discussion on the active forum there as well. It’s fun, but nothing will ever take the place of the original magazine that managed to feed my mania for the nominal price of $1.50-2.00 an issue back in those days. For me, buying music instead of rock press was the thing. Expensive $3.00 import copies of the NME or Melody Maker represented money better spent on actual music. TP filled an important void at an attractive price for me.

15 Responses to The Trouser Press Years