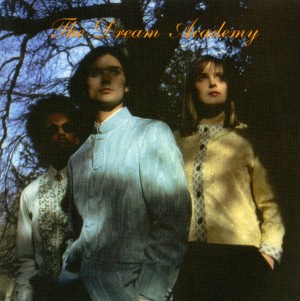 I first heard The Dream Academy on British music show The Tube, where they had made an in-house video for the song “Life In A Northern Town.” It was a delightful song that captured my attention immediately. The delicate orchestration mixed real strings and ferocious tympani for a warm, vibrant effect. That the band had a member, Kate St. John [Ex-Ravishing Beauties] whose lead instruments were oboe [be still, my beating heart] and cor angalais showed that they were willing to stick out from the bulk of the Mid-80s pack.

Listening to this album now, I’m struck mostly by how close singer Laird-Clowes is hewing to the style developed commercially by Paddy McAloon of Prefab Sprout. Though I as usual, maintain, that McAloon lifted his mature style from producer Thomas Dolby as evidenced by several tracks on his album “The Flat Earth,” produced a year before linking up with Prefab Sprout for their seminal “Steve McQueen/Two Wheels Good” album. But, yeah, tracks like “[Johnny] New Light” fairly reek of received McAloonisms. [is that a word?]

The use of the Johnny archetype was straight from the Sprout’s playbook but where Laird-Clowes differs the most from McAloon is in his love of bombast that surfaces throughout this material every now and then. McAloon was far more intimate with his songwriting, but Laird-Clowes seemed to favor the grand gesture, making these songs a notch or two below those of his peers. Still, it was heartening to hear “Life In A Northern Town” scale to the lofty heights of number seven on the US top 40 of late 1985. A full eight spots higher than the song charted in the UK top 40. I’ll take what I can get!

I remember seeing ads for The Act’s “Too Late At The 20” album in Trouser Press in 1981, but I never had the pleasure. Nick got his [false] start in that band, which also happened to contain David Gilmour’s younger brother Mark. This paid off when after The Act broke up, David used his clout to back Laird-Clowes in his Dream Academy bid a few years later. In fact, Gilmour co-produces all but one of the tracks here. Ultimately, the real pull for my ears 31 years later was all of the goodness that Kate St. John put into this music, though her sax playing was a little too softjazzrock for my tastes. Fortunately, it was completely overshadowed by the oboe and cor anglais on display here. I like this album enough to listen to it occasionally, but I later bought the third Dream Academy album only to quickly flip it. The tale endeth here.