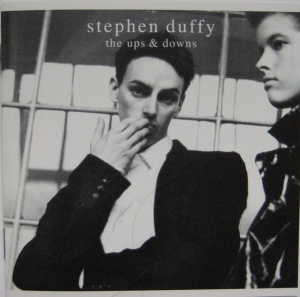 I was looking for something on Amazon.com at the start of the year and I saw the same row of come-ons that I usually did. I noticed that one of them was this album; long pencilled in as a “must buy.” I clicked to see its status, since the price given was a modest seventeen and change. My eyebrows raised considerably when I saw that Amazon was the only vendor selling it for that much, and they had it as a “backorder.” Any Amazon dealers with a copy in hand to sell had it priced from $150 to $644! All very abstract, of course, but it did light a fire under me to no longer wait for this puppy! A quick trip to Discogs.com revealed that this title was actually selling for about $20, but Cherry Red had it stricken from their roster after seven years, so I bought quickly. 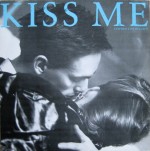 This was the debut album from Duffy and it managed to make me a lifelong fan, with a collection to match. The album itself was of three minds, and having followed the Duffy saga through the many years and labels later, he managed to tip his hand on the path his future would take admirably well here. Of course, “Kiss Me” was the first track I heard, in its 1985 version. Even then, it remained a pitch perfect piece of synthpop, with interjections of AON Fairlight CMI® courtesy of J.J. Jeczalik. The chord progression of this tune remains like a cascading waterfall of pleasure, even after 31 years. 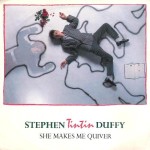 Duffy’s debut single for Virgin/Ten Records came next. “She Makes Me Quiver”  was  a bit more rooted in the deprecated synthpop of the day, unlike “Kiss Me,” which had been written [and recorded] several years earlier for WEA/Sire. Lots of funky slap bass abounded here, courtesy of Guy Pratt, fresh off of the third Icehouse album. It was more than competent dance pop of its time, but any of the four songs from this album that fit this general sonic mold, have help up less well than the other material. Still, this song was head and shoulders above the likes of “A Masterpiece” or “Believe In Me” due to the exceptionally witty lyrics from Mr. Duffy’s pen on display here.

“The soft suede of her boots,
It makes you a neurotic,
Your Maxfield Parrish suits,
Is style like a narcotic?
But if I can’t de debonair,
I’ll just be gaunt and gothic,
Can we make a pair?
Yes that would be exotic” – “She Makes Me Quiver”

“But Is It Art?” proffered a more delicate [and effete] pizzacato synthpop that played as far more sophisticated than the first three songs and finally, the true aim of Mr. Duffy was first telegraphed here, in spite of the synthesizers and drum machines on display. This material and arrangement was far more winning than even the fine pop earlier on display as it telegraphed more of Duffy’s soul than the other more perfunctory songs preceding this one.

The next track was the radical remix of “Wednesday Jones [Dixie]” that replaced the original, more spartan take of “Wednesday Jones” which appeared on the 1985 CD. That tune was simply an acoustic piano ballad played and produced by Booker T. Jones. The “Dixie” version appeared initially on the 1986 “Extended Play” EP and it now sits on the album proper. Duffy himself produced this version, along with Bimbo Acocks Dixieland Jazz Band [with Dave Mattacks on drums] fleshing out the brief  two minute song into a veritable four minute opus. It opened with a creamy sax that was just this side of soporific but the tune quickly gelled into something more substantial. Had there ever been a 1985 song so out of step with the prevailing ethos of that deadening time in music as this one? With this song, in any form, it gave a strong indication of the future that lay ahead of the reluctant synth popper.