Posted on February 5, 2016 by postpunkmonk

Another soundtrack project [these were getting far too numerous for comfort] popped up before 1987 rolled around. Julien Temple’s “Absolute Beginners” project was given copious amounts of UK hype, given the Colin MacInnes origins of the film. His book of the same name was a much-beloved, seminal 60s piece of British pop literature that captured the zeitgeist of a generation. The Jam already took the title for a great single of theirs, so when Bowie took another stab at a song with that title, it already had the whiff of yesterday’s news. I never saw the film. It was envisioned by Temple as an over the top hollywood musical by way of and the cast was stuffed with singers like Sade and [I’m using the term loosely here] Patsy Kensit as well as Bowie himself rubbing shoulders with the mere thespians. 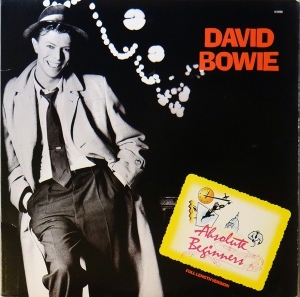 Again, I let the MTV video be my guide. The Clive Langer/Alan Winstanley vibe was probably right for the project, it’s just that their music hall roots spoke to Bowie’s own in a bad way. While Bowie had begun his career taking stabs that his first manager, Ken Pitt, saw as pointing him in a Tommy Steele all around entertainer manner, it’s true that I didn’t think much of that approach. It was not until Bowie was making proto-post-modern rock and prefiguring Post-Punk rock that he resonated the most with me. This was too genteel and drab, though marginally more interesting than the album material that I was hearing at the time. I saw the video. I passed. 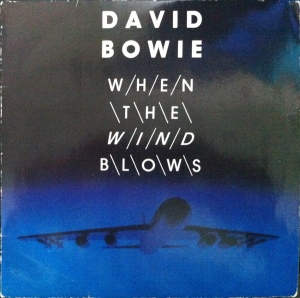 Another soundtrack single was released in 1986. “When The Wind Blows” was the title song to an animated film of the same name dealing with nuclear holocaust. Given the subject matter, I don’t think the film ever got a release in America! To this day, I’ve not heard the song. It’s on a few Bowie compilations that I do not own. It’s missing from his video collections. Nice sleeve art, though. Malcolm Garrett came through.

1987
The next year rolled around and Bowie was right there with an album and tour. Too bad it was “Never Let Me Down!” With trepidation, I watched the first video premiere on MTV and while the “Day In, Day Out” video had a prescient Daryl Gates vibe to it that was certainly interesting, politically… the song was a tired “Let’s Dance” re-tread. When Duran Duran re-wrote “Let’s Dance” as “The Union Of The Snake” that was one thing. When Bowie was reduced to self-pastiche… ouch! Much ado was made about the “Glass Spider Tour” which would be an arty, theatrical extravaganza like nothing since the abandoned “Diamond Dogs” tour, but I wasn’t buying any of it. Especially when I heard that the lead guitarists for the album/tour was to be… Peter Frampton? I get that Bowie took art classes as taught by his schoolfriend Peter’s father, but in 1987 Peter Frampton was no one who I ever needed to hear again. Even over a decade later. 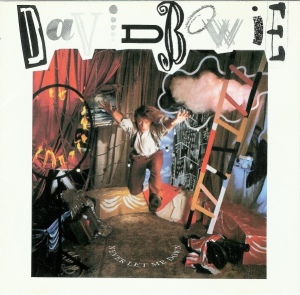 A later single from the album was “Time Will Crawl,” and this one really seemed like a Bowie song to me, in spite of its MOR trappings. The deeply strange lyrics were actually intriguing. If the third single, the Lennonesque title cut, hadn’t been so pedestrian [complete with faux Stevie Wonder harmonica] I might have picked up a used copy, but no. This was now the fourth consecutive Bowie album that I dared not buy! If I could have taken a time machine back to 1980 and told myself this fact, I hardly would have believed it. Worse yet, when the Glass Spider tour reached the backwards state where I lived, I would finally get a chance to see David Bowie in concert. The tour was appearing in Tampa Stadium, just 90 minutes away. While I would have seen Bowie even during the Serious Moonlight tour, but now he had the aroma of damaged goods to me. I nor any of my friends took the brief trip to Tampa to see this show. Tellingly, a Bowie fanatic friend of mine who lived in Tampa at the time also sat this one out.

Next: …The only way is up