Posted on February 1, 2016 by postpunkmonk

Yeah. It chills my blood, too.

When the hype machine started building up for “Let’s Dance” I was fully engaged. After all, I had been waiting over two years for a new Bowie album. The charts were full of his imitators, taking presumably inferior Bowie knock-offs into the charts while he lay in wait; biding his time. In 1983, Nile Rodgers was the guy who co-produced the iffy Deborah Harry debut solo album and little more to me, but I was willing to give him a shot. It was a big wait for the MTV World Premiere Video® and when it was done, the wind had been sucked from our sails like never before. I have written more extensively on the phenomenon here. Suffice to say that I did the previously unthinkable and did not buy the new David Bowie album or even a single. The other two videos were all disappointing on a song/visual level. “China Girl” was kitschy sub-Bowie pastiche. Only the lyrics to the turgid “Modern Love” even seemed vaguely Bowie-like. I was quite happy to wait out this creative drought. I still would have seen Bowie live if the Serious Moonlight tour had come anywhere near the Southeast but the closest date was in Texas! So there we were.

Throughout 1983, Bowie was second only to Michael Jackson on the hype front, but musically, he was about on par with the gloved one. Treading water artistically but shifting units like never before through applied business theory. No scratch that… at least “Thriller” had one stone-cold classic; the derivative, but tight “Wanna Be Startin’ Something.” All that I had heard from “Let’s Dance” was irredeemably dull in comparison. After the Serious Moonlight tour was over, it didn’t take long for the follow-up album to Bowie’s monster selling “Let’s Dance” to manifest. “Tonight” got a start with the pre-release single for the happy pop tune “Blue Jean” …which was the big problem right there. This was from a middle aged rock star who had been making much more complex records almost from the start. It felt fraudulent to hear him sing an upbeat bobby-sox rock ditty with no shading or nuance. After seeing the video debut on MTV, I looked as dyspeptic as Bowie did on the album cover. 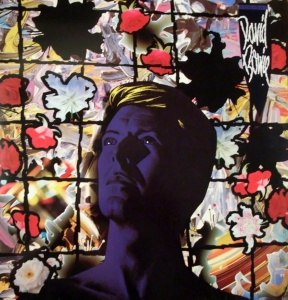 The second single was “Loving The Alien.” While it was miles better than anything I’d heard from “Let’s Dance,” and “Blue Jean,” it still failed to convince. There was something just off about the whole thing. The lyrics were intriguing, but the arrangement and video were just too florid and if it was about the conflict between Palestinians and Christians, then the camp faces Bowie pulled in the video were disquieting at the least. He had the look of a man losing the plot in that one. I don’t even remember seeing further videos from this album, thought there must have been a few more singles. [looks]. The title cut had no video so I never heard it. A duet with Tina Turner? Pretty boring stuff. The only exciting Tina Turner record was produced by Martyn Ware. This was shaping up to be a loooooong decade and it wasn’t yet half over.