Cabaret Voltaire: I Want You

Posted on December 9, 2015 by postpunkmonk 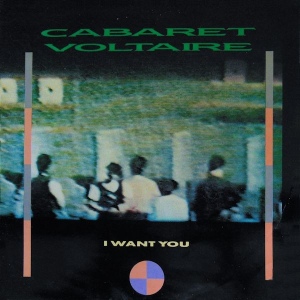 It didn’t take too long after the appearance of Cabaret Voltaire’s “Drinking Gasoline” 2×12 in 1985 for their next move to manifest. They were laying rubber in their Western Works studio as fast as they could. I can’t remember exactly how I had heard of this, but I recall that it was out and I had asked Mr. Ware to pick this up for me from Murmur Records on a trip over to my house for some music video goodness at the time of its release. When he arrived I had to throw it on the turntable immediately. Not like these modern times when years…nay, decades can pass between purchase and listening. 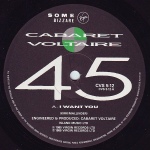 The A-side was from the album that was forthcoming, but at the time, nothing was known about it. I even thought that a track from “Drinking Gasoline” may have been on their next album as well. In fact, two cuts from that project were bonus tracks on the CD of the infamous “next album,” though it would take a few more month to find this out. “I Want You” was a highly enervated, relentless thrash monster that was more vehement than the more trance-like material that had preceded it on “Drinking Gasoline.” The extended version of the A-side was of a piece with the many other 12″ singles of this period. It’s almost eight minutes of malevolent dance music; not a million miles away from the LP mix of the cut. Just longer.

One difference to “I Want You” was that the first two minutes of the  track hewed closely to the single/LP arrangement, before the mix opened up and became less paranoid and claustrophobic for almost four minutes of instrumental stretching out in relative peace. Then the song tightened up for another two to three minutes where it returned to the more frantic and cluttered motif of the intro. One interesting thing about the A/B side to this record was that the amount of music on the B-side was almost twice as long as what the A-side offered. For that reason, each half of the disc was mastered at a different speed for maximum fidelity. 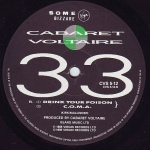 Side B offered two non-LP tracks. “Drink Your Poison” was the band on full-on funk mode with seriously nasty wah-wah guitar licks courtesy of multi-instrumentalist Richard Kirk. He’s not a technically brilliant player; Quincey Jones would never think to call him up for a session, so his essential naivety allowed him to attain a vicious tone here that marks exactly how Cab Volt should approach funk. On their own, malignant terms.

The second of the B-sides was the psychotic cut-up of “C.O.M.A.” It sounded like the whole “The Covenant, The Sword, And The Arm Of The Lord” album had been thrown in a blender with the purée button pressed. It sounds like it may have been digitally edited at a time when that was really difficult to do. It is 8:30 of random chunks of the album’s tracks, repeated in ultra-brief bursts for many, many times and edited together with a trowel. Was it done on a Fairlight? That’s my guess. No one would have done the tape editing necessary to achieve this by hand. More to the point, if Cab Vol couldn’t have cranked this out in an hour, they probably would not have bothered. It’s definitely one to play when it is time for the guests to leave your party at 3:00 a.m.

Surprisingly, this was the only single released from “The Convenant, The Sword, And The Arm Of The Lord” when several more songs on it sounded just as strong as “I Want You” regarding their fate as single material. To hear Richard Kirk talk of it, Virgin were very confident in the A-side, so they all went with it. One thing is for certain; the budget was there for Peter Care to film my favorite video ever to accompany the single release! As much as I love most of the Cab Volt canon, and that includes the mind-stretching “Sensoria,” the simultaneously lush/strident/erotic/violent imagery filling the frames of “I Want You” are intoxicating viewing. I suspect that David Lynch might have caught the video for “I Want You” and certainly the short film “Johnny Yesno” that Care directed with a Cab Volt soundtrack before helming his own dark, fever dream, “Blue Velvet.”

11 Responses to Cabaret Voltaire: I Want You