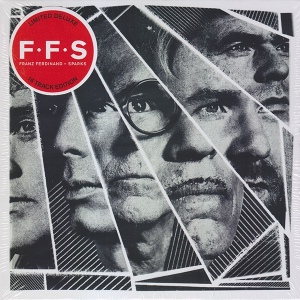 When word drifted down of the unexpected collaboration between Franz Ferdinand, and Sparks, it came to me as a total shock. True, the extensive “Two Hands, One Mouth” tour should have prepared me for the inevitable swing away from the most minimal Sparks setup to something more maximal. Still, no one expected their next move to be a supergroup!

Regarding their partners in the F•F•S venture, I only had a dim, overall awareness of Franz Ferdinand. I had been aware of the band since their emergence, over a dozen years earlier. I had heard rumblings that the band were part of the New Wave of Post-Punk that emerged in the new millennium. That and a four dollars will get me a chai latte. Paint me a little jaded, but I remembered the New Wave Of New Wave and the Romo non-movement in the 90s to waves of ennui. When I saw the F•F•S album in the racks the week of release, I came this close to picking it up. I wisely didn’t, since I was saving my shekels for a vacation a few weeks later.

Once I returned home from that trip, I mail ordered several boxloads of music from the store I visited in Philadelphia, but could not buy any of the things I knew I wanted from their webstock [their web store was separate from their storefront]. One of the titles I got was the Franz Ferdinand DLX debut album. Then, a month later, I was back in Harvest Records, buying the new Laurie Anderson album, and I made my move seeing that the DLX F•F•S was back in stock in their racks. Having this album after finally hearing Franz Ferdinand was infinitely wise since I could now extract more meaning and context from this teamup. I can see that coming to this album as strictly a Sparks fan would offer a lopsided view of its many accomplishments.

First of all, this was a Franz Ferdinand/Sparks album. Writing credits were homogenized [all tracks written by F•F•S] and the vocals were handled deftly by both Alex Kapranos and Russell Mael jointly, save for a single track where Nick McCarthy shares the mic with Russell. The vocals were deftly arranged to give each singer their alloted space while weaving both voices into an effective tapestry of each song’s arrangement. Each vocalist staked out differing territory in each song for a fluid dynamic that was kind of remarkable in retrospect.

The material here was pretty strong coming from a Sparks fan perspective. The lyrical POV present in these songs fairly reeked of the unique artistic DNA of Ron Mael. None of these lyrics sound like a Franz Ferdinand song… at least as represented by the debut album. What the album sounded like was the return of the first and second phases of Sparks career. The ’72-’88 eras when they had a band backing them on their records. Since entering their third phase [since 1994’s “Gratuitous Sax + Senseless Violins”] the band have effectively been just the brothers with a scant few helping hands used on a case-by-case basis. This period had seen Sparks riding high in the German charts for one of their periodic [but fleeting] brushes with the Pop Zeitgeist of a Nation Other Than America. But for the most part, they have been a self-contained unit, traveling lightly and cheaply but making huge artistic strides with breakthroughs like “Lil’ Beethoven” that were alien to all of their peers. No one else that old manages to pull such a dandy rabbit out of their hat!

How I would have liked to have been a fly on the wall when the writing sessions for this album were underway. It sure doesn’t sound like FF and Sparks brought some demos to the table and worked them out in a rehearsal room. It sounds like Ron had a fat notebook of material that Franz Ferdinand had a hand in arranging for album. More or less. The single of “Johnny Delusional” was a smart bet for airplay with  a song that seems related to the post-“Lil’ Beethoven” run of albums that the brothers have released to my delight.