Posted on September 30, 2015 by postpunkmonk

Old hands at PPM may remember me posting about Time Traveler in Cuyahoga Falls about a year and a half ago. As we know, times change, and the music biz is undergoing constant change in the 21st century. Why should any one store be immune? I was in Akron, Ohio visiting family during our vacation and of course, a trip to Time Traveler was in the cards! Lo and behold, I found that the dramatic commercial renovation on State Road in Cuyahoga Falls had fallout that reverberated in the Monk’s world. Long time tenant Scott Shepard had lost his lease due to rent increases. As we know from the holy writ as recanted in “High Fidelity,” record stores hover on the outskirts of polite society…where the rent is lower. What to do when encroaching gentrification starts knocking at your door? Moving is the only way out. Scott moved his store from Cuyahoga Falls to Akron in January of this year. 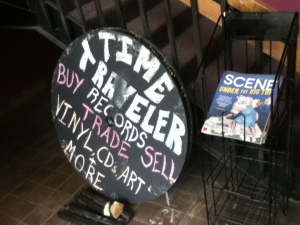 I easily found the new site, and it was on the first floor of a business building with what I might add was an excellent parking lot as part of the new site. There was now an airlock inside of the outer doors, a not inconsiderable perk during Northeast Ohio winters. I entered to find a smaller space of two rooms instead of the sprawling space I had been used to. In the past, I had generally found so many albums on CD that I had only ever seen in this store; such was the amount and kind of import CD product on offer. Would it still measure up?

The space was only about 40% of the previous store, so much stock had probably been sold off during the big move. Probably at fire sale prices. I quickly scanned the CDs and found many I remembered and were still singular “Akron-only” CDs, like the Sensational Alex Harvey Band twofer CDs that would only appear on these racks! But nothing was a “must-buy” on this day. After 15 minutes or so, I had blazed an empty trail through the CD stock. Would the albums yield better results? I looked through them and found a few 12″ singles of interest, it’s true. Again, I saw rare US copies of Cockney Rebel’s “The Psychomodo” album; sold here as a Steve Harley album with a vastly different cover. Multiple copies of such. But no albums that called out to me strongly. I was beginning to worry that all might be lost for this venerable store that I have shopped at for 20 years now. Then I examined the 7″ single stock.

I can’t recall ever buying any 7″ singles here but by now I thought I was grasping at straws. I thought that, until I actually began to rifle through the 7″ bins. It was just minutes later that I realized that Time Traveler’s 7″ bins were now the best I’d seen since the holy trip to Rockville, Maryland and Yesterday + Today Records in 2002! First of all, the sign on the box said “Singles $1.99” and most of them seemed to have picture covers. 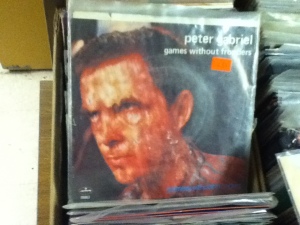 I was quickly seeing desirable items of both import and domestic issue with sharp, barely worn picture sleeves! Better yet, the bin had stock in it ranging from the mid-60s to the mid-80s and most of these had picture sleeves. Crazy things like 50 year old Orlons 45s on Cameo-Parkway in knuckle-gnawing condition. Better still, there was absolutely zero instances of what I’ll call modern 7″ records, from after the salad days of the format. Ugly music in ugly sleeves for ugly people. You know; indie punk records made in the 90s or later when the 7″ had ironic resonance with hipsters. Not the kind of records we write about here.

Sure, sure. I own this on VS 417 by Heaven 17, but that doesn’t mean that I still don’t get a twinge of immense pleasure when I come across the ever rarer copy in the diminished bins of the 21st century. 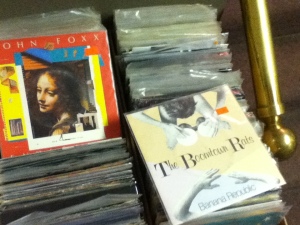 John Foxx double pack 45s on Virgin?! Always a pleasure to see even though I’ve had all of them since the time of issue. The Boomtown Rats single had “Man At The Top,” a non-LP B-side that didn’t make the cut on the 2005 DLX RM Rats titles I have a complete set on. I snapped that puppy up like, pronto! This was another brick in the Boomtown Rats “unnamed rarity project” that has been percolating for over a dozen years.

Gary Numan singles from the “Telekon” era? Bliss. I only own “We Are Glass” [the best one] but it would not hurt to own them all. That would be this one and “This Wreckage,” the only “Telekon” era single actually from “Telekon.”

I have all of the Klark Kent 7” singles, save for one not here, “Rich In A Ditch,” which, yes, I would have bought had it been here. Even though there’s nothing on it that I don’t have elsewhere [on CD for that matter]. But wow! Look what was next to it in the bins. Grace Jones 7”ers from the “Nightclubbing” era with Spanish language B-sides??!! For $4.99??? Even though “I’ve Seen That Face Before [Liber Tango] (Spanish Version)” is on the highly desired “Nightclubbing” DLX RM, you’d better believe that I was all over that wax like white on rice! I have never seen any singles from 1981 by Ms. Jones. 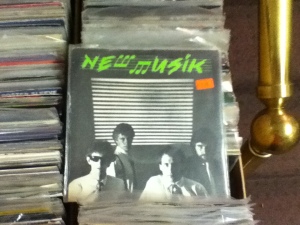 New Musik’s holy “Straight Lines” 7” was another grail-like record, that I passed on this time, since I knew that both sides resided on my Dutch “From A to B” CD.

As for what I did buy, the list below shows a lot of amazing material for my roughly $50 investment.

The Kid Creole 12” was a non-LP single from the… “Against All Odds” OST? Who knew? We only got Full Colon emoting in a puddle in America. The Marianne Faithfull 12” was a promo-only 12” mix from “Dangerous Acquaintances” with a song penned by Faithfull, Barry Reynolds and Wally Badrou? I’m on it! An I was pleased to finally have found the Mute 12” from “The Assembly.” I’ve never heard the B-side so this can finally be corrected.

The Robert Palmer 7” has a non-LP B-side, called “Nova.” I was blown away by the Associates 7”, which I have on 12” only. Restricted Code and Ad Infinitum I bought because of their respective labels. The former was on Bob Last’s Pop-Aural label with Stephen Lironi later of Altered Images featured on drums with Calum Malcolm engineering at Castlesound? Yow! Buried treasure time. The latter was a cover of the venerable Joe Meek instro classic by a band on Factory Records? With a holographic cover? Which was actually Tony Wilson’s wife and Hooky from New Order in a duo situation??!! Crazy not to buy.

Another record I had little knowledge of was Last Man In Europe, but they were produced and released by Bill Nelson, so I’m there. Especially nice that this record usually sells for prices I can’t normally afford. The Josef K single was another rare bird I’ve never seen. All I have is the first two albums on a single CD so this was a shoo-in. I just talked about Stan Ridgway’s excellent first solo album and the “Don’t Box Me In” single has long been a thorn in my side with its absence from the Record Cell for 30+ years. In a better world, it might have been a bonus track on the CD but no one asked me.

I was excited to see the early Au Pairs single, since I enjoyed them so much on the Urgh! A Music War DVD I had made some years ago. This is their first foray into the Record Cell, but I’d gladly buy more. It’s just a case of finding it. The “Weird Al” 7” simply had a cover that made me laugh out loud, so I had to purchase my first music ever by that artist after having first heard him from the homebrew tapes he used to send into Doctor Demento back in the late 70s.

I forgot that I already have the US 7” to Icehouse’s “Crazy” in all of its poodle mullet “glory” so this will be my second copy in the Record Cell. Live B-side so we’ll see which copy digitized more cleanly for the long mooted Chrysalis Icehouse project. Finally, two Double 7”ers with remixes on their A/B sides for a little fun on a Premaster volume that I should get back to making.

I also spent a long time talking to owner Scott Shepard. Waxing eloquent on the subject of Ferry/Roxy as he was playing “Manifesto” and the 801 album in-store this day while we chatted and shopped. I’m thrilled he has forged ahead on keeping this vital resource a part of the Akron music community in spite of getting tossed from his previous location due to the Demon of Gentrification. When in Akron, do stop in and revel in his stock, especially his 7″ singles which have gone through the roof in terms of desirability, not to mention price.