Posted on September 9, 2015 by postpunkmonk 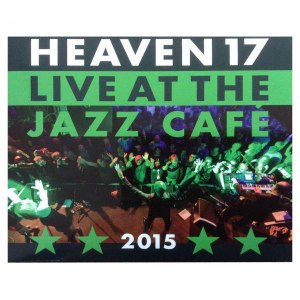 Last Friday, just weeks after finally posting my rave review of the 2014 H17 live album/DVD combo pack, came news from H17 HQ that their recent gig last Spring at The Jazz Cafe had been recorded and released as a live double CD. It’s pretty common for bands to be pushing the live CDs of every gig around these dark times, but the last live album was an eye and ear opener about how powerful this band could get. When I heard it, a mental line in the sand had been crossed and I found myself thinking “this is the hottest band going right now!” Heaven 17 have honed a live band that was truly hot and believe me, no one would have expected it on the face of it. After listening and loving the 2014 album, my thought was “I need to see this band live – they are reaching towards the live standard of Simple Minds in ’83-’84, which is to say that they are now one of my favorite live bands ever.

When it comes to live Simple Minds, I am a sponge for whatever live recordings I can get. Some of them  [which are not ‘official’] are my favorite recordings of the band ever. Irvington, NJ from the 1984 US tour is a particular jaw dropper. H17 are not far behind that standard with their supremely capable live team who can really make their music sizzle with an energy that their studio records, as great as they are, pale in comparison. So the news that a live CD/DVD has been followed a year later with… a 2xCD of a full concert is actually pretty compelling to me! To the point where I soak up all that I can get.

This set has the by now mandatory Malcolm Garrett cover design, in addition to a fan photo-packed booklet. The big difference with this package was that the set here was four songs longer. On the face of it, not a radical leap, but the titles above in boldface were not on the last album. That’s twelve new numbers in the capable hands of this dream version of H17! Look at what awaits us! The hot new single [“Pray” b/w “Illumination”] from the upcoming album is there. As great as the vinyl was, I imagined that these songs would be realms better with this band at the helm, live.  And that’s just the start of it. Two of my dream Human League tracks [“Crow + A Baby,” “You’ve Lost That Loving Feeling”] are here and so is “Circus Of Death.”  I love how vintage Human League material is now a part of many H17 sets. This is a right and proper thing.

I’m also excited to see the sumptuous ballad “Best Kept Secret” added to the set. When I played “Luxury Gap” compulsively last year, this was the song that was really sticking to my ribs in a new way. It’s also thrilling to see two great covers in the set for that twist of B.E.F. juice that makes everything gel nicely. The band’s version of “Party Fears Two” is a classic Associates cover juxtaposed with Glenn’s [and keyboardist Berenice Scott’s] time in Bowie SuperCoverBand Holy Holy. From their set lists comes the Billy MacKenzie-inspired cover of Bowie’s “Boys Keep Swinging.” Does it get any more symmetrical than that? Don’t look for this in your local CD ghettos. It’s for sale at the H17 merch table or in the H17 webstore for a modest £12.00 [$18.44, today] plus shipping. Autographed for just £3 [$4.61] more, if you’re of that persuasion. Me? I’ll settle for the basic CD once I get back from my vacation and see how many shekels I have to rattle together.