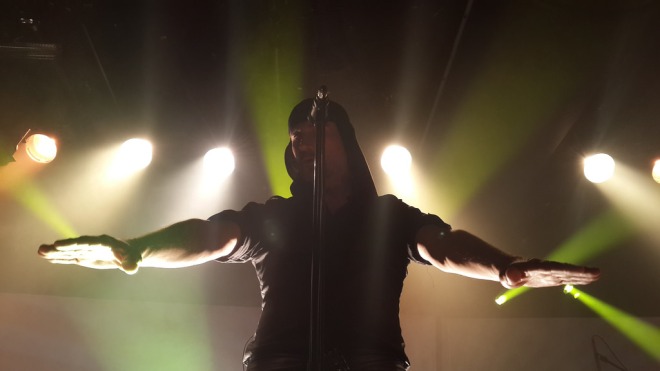 Laibach have declared: “No More Simple Minds at Post-Punk Monk!”

And now for something completely different…

Laibach, the Slovenian masters of low-hertz rumble and a powerfully Post-Modern take on Eastern Slash Western politics all set to an insanely juiced up visual and aural take on nationalistic propaganda such as to make Leni Riefensthal* weep with jealousy [phew!]… have decided that enough is enough. After not troubling American soil for seven years, the art monster collective have decided to breach American borders once again, even in the face of indifferent capital. Their May North American tour, already underway, is being undertaken at a loss because money has been deemed less important than their reason for being… communication of their complex/humorous/frightening message. The band themselves frame it best:

“In May, Laibach is setting off on a new tour of North America, where it last toured in 2008. The tour is expected to result in a loss of USD 60,000. So why in the world would we undertake such an effort? Because we care! It matters to us what is going on with our audience and with the American people and we don’t want to isolate America as if it were a third world country.”

Bravo! I doff my Aztec Energy Dome to those who would declare that, in the words of Killing Joke, Money Is Not Our God. To this end, the tour has already begun, and it will happen. In fact, it cannot be stopped, but Laibach have undertaken a crowdsource program to reduce the amount of loss they are personally underwriting. So much the better that legions of fresh-faced, North American youth, who were but a twinkle in their ancestor’s eye when the group began their artistic struggle 35 years ago in the former nation of Yugoslavia, can experience the legendary 50 Hz vocals of Milan Fras; he of the lowest basso produndo I’ve ever heard.

To date, their plea to their fans has been reasonably successful. I strongly urge any and all interested to click the banner below to read the full page at Indiegogo where the crowdsourcing is hosted. Not only is their commentary witty and heartwarming by turns, but the delightfully granular packages of support have some outrageously tempting premiums associated with them.

Would that I had more then two nickels to rub together right now, I’d at least buy-in to the live album that $25 nets you. The all-wooden Laibach smartphone amplifier [$125] would be an unbeatable accessory… if I had a smartphone. The $180 “Laibach Look Package” comes complete with a smart tie, a belt a super-villain would die for [and he would, you know], and an actual surplus Yugoslav Army shirt. $3000 gets you three days with Laibach in Slovenia, meals and accommodation [but not transportation] included. All pale next to the $10,000 premium of Honorary Laibach Membership. The most fascinating feature of which is an “oil portrait of you [1.2M x 1.6m] in the unique Laibachian style!“

The tour winds up in Hotlanta at the legendary club The Masquerade, which no trip to Atlanta in the 90s was complete without. The three story structure features Heaven [stage], Purgatory [pool tables and bar], and Hell [dance floor]. I am half contemplating going into hock to attend this, but really, the cash is not there for such a flight of fancy right now. Many’s the night I was Dancing In Hell, but on June 5th, one could experience the brain-melting paradox of Laibach In Heaven.

* Speaking of Leni Reifensthal, here’s the video for “The Whistleblowers” from their latest opus, 2014’s “Spectre.