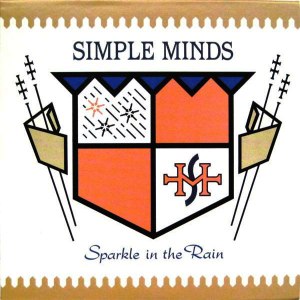 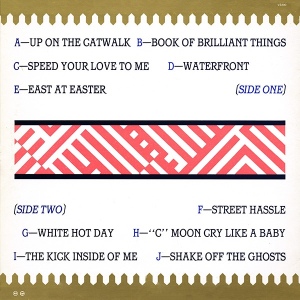 When Simple Minds followed a dramatically different tangent on their follow up to the breakthrough “New Gold Dream” album, designer followed along, albeit with one foot in the past. The imagery still drew from antiquity with heraldic imagery used in lieu of the more typical band shot. And there was still a five color sleeve with metallic gold inks, but the images were rendered with a clean, modern touch that was best reflected by the use of a fluorescent orange ink [that does not transmit its vibrance online] as one of the basic colors.

The inner sleeve delved deeper into the op art that the back cover hinted at with negative areas in the grid contained within circular holds. 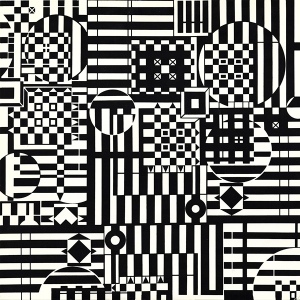 The UK labels also picked up on this motif for a custom look that trumped the generic A+M labels used on the US copy that was on my racks. 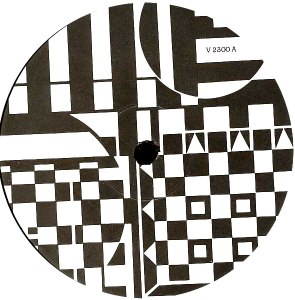 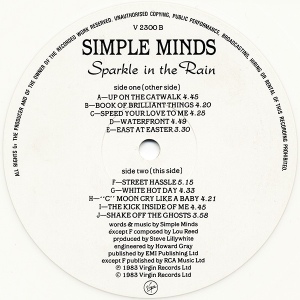 The  front cover design never quite worked for me as it didn’t really reflect the music inside of it as well as the earlier covers had done, but the op art imagery was more successful in this regard. Simple Minds had followed an album of subtle tonal range with one of high contrast, so this made sense to me. The cover imagery touches on this, but seems to be holding back as mentioned by once again referring to historical imagery. I think that the back cover comes closer to more accurately representing the music. Only the edge trim in gold sends a false note.

As I mentioned, I never owned a UK LP of this title. By that time, A+M Records were working that action, and I never saw imports of titles that also got a domestic release unless they were issued abroad far in excess of the release schedule at home [cf. Altered Images “Pinky Blue”]. I went from the A+M LP to the A+M CD two years later, and there I sat, until in 2001, a trip to Toronto yielded this gem. 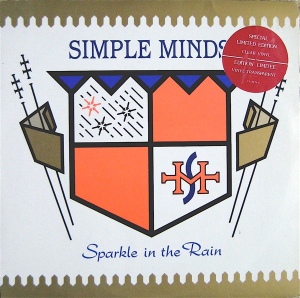 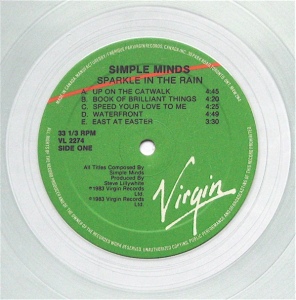 I was aware that the Canadian copy of this album had its first pressing issued on clear vinyl back in the day, but then I saw this in the bins, I had to give a look and viola, there it was, albeit without the sticker on the cover. I chortled at my luck that saw this added to my haul that weekend for a pittance. Only records of use to hip hop sampling [ca. 2001, jazz and lounge records] were selling for big money in that environment at the time. As was common with many Virgin territorial labels, this featured the familiar red/green label variant of the day. I’ve yet to actually own a UK pressing of this album in any format, but that super deluxe boxed set was released last month and is still calling my name. 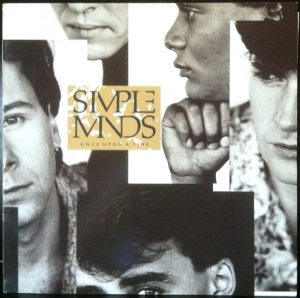 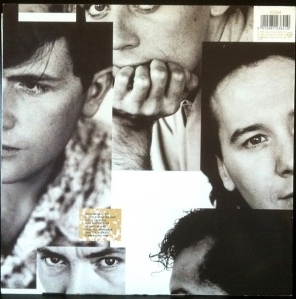 I’ve recently read Jim Kerr talking about the notion behind their top selling “Once Upon A Time” album as a result of seeing what David Bowie had done when recording in America and aiming for the pop charts instead of arty obscurity. Seen in this light, the decision to use Mick Haggerty for the cover art [Anton Corbijn took the photographs] makes all the sense in the world. Especially given that Haggerty had a strong relationship with their American label, A+M Records and had in fact, designed the cover to “Let’s Dance,” not to mention top selling discs by Supertramp and The Police. Even I have to admit that the “Breakfast In America” project was a graphic design tour de force; fully worthy of its many accolades. We’ll not see its like again.

Chances were not being taken here at any level, so the steadfast Malcolm Garrett was ejected for this time only [he’d return soon enough] and the resulting album cover for once featured the band bold as brass on its cover; albeit with an arty edge still [barely] remaining. As if to give no doubt as to where the loyalties of this album lay, the covers [front and back] were designed to be a seamless tile; all the better for covering the wall or front window of a record store! 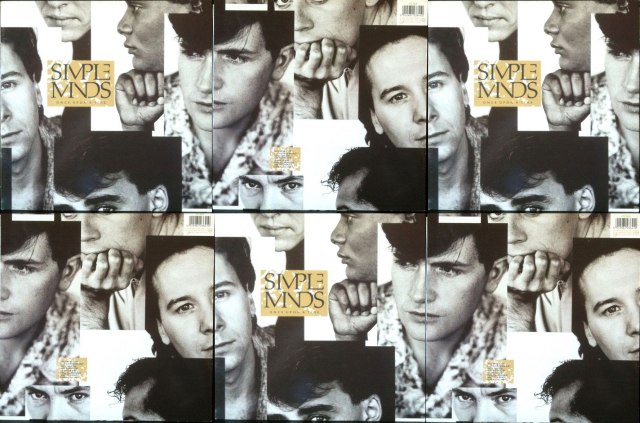 Is it me or does Jim Kerr look hypnotized on the cover shot? He was probably dreaming of the filthy lucre that lay ahead and would be filling his coffers soon enough. As if to hammer home the banality of this album, the most exotic variation available was the UK picture disc LP; possibly the least interesting pic disc I’ve ever seen. 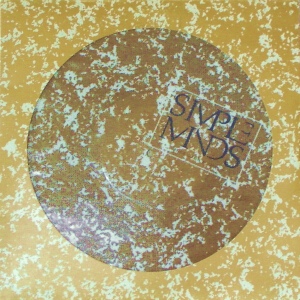 I’ve seen this in stores back in the day and I was not touching that with a ten foot barge pole.

Next: …[if you can believe it] Still More Covers!