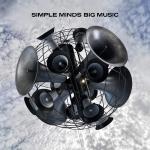 Back in the dark ages of 1986, when I first saw Simple Minds, they had The Call as their opening act. That probably colored my view of them to be even harsher that I might have been, just through association. Having them as omnipresent openers for other UK acts on these shores too late in the game in the late 80s didn’t help any. When Simple Minds covered “Let The Day Begin” on the “Searching For The Lost Boys” cover album included with the deluxe edition of “Graffiti Soul” it didn’t move me any. Then I saw them on their 2013 US tour and was shocked when their live set featured yet another stab at “Let The Day Begin.” The intervening years didn’t do it any favors, especially.

All of that changed when the laser hit track seven on Big Music. The intro was deceptively cheeky, with Andy Gillespie playing a variation on the MOR Fender Rhodes intro that I’d grown to dread hearing on “Alive + Kicking,” but wait; after a few bars of this mush, a rhythm could be heard advancing. Softly at first, with pulsating bass synths and a rhythm loop offering hope that this would not be another rehash of wispy wimp rock. Then…the gated drums hit and the loping tribal backbeat had completely overtaken this wallflower of a song straight into “Waterfront” territory. Burchill’s guitar offered up an abstract riff as the piano bowed a graceful exit [at least until the middle eight].

The “Waterfront” connection made sense because The Call’s Michael Been had no doubt heard “Waterfront” played many a time in his days and he had told Simple Minds that he had a new song up his sleeve that was inspired by their classic number. Years later, Simple Minds had remembered Been, who had died a few years before they returned to these shores and thought that maybe they should cover the song for their North American tour as a commemoration of Been, who was by all accounts quite a favorite of the band.

By the third try, Simple Minds had taken the song back and had given freely of their “Waterfront” DNA to it, and this made all of the difference in the world. Turn that sucker up and just try not to pound along with anything at hand. Sure, it’s a tad more complex than the neolithic bass line that Forbes managed to pull out of his usually more elaborate bag of tricks, but it still has all of the brainglue necessary to infect the mind for hours at a time once heard. Jim Kerr changed the lyrics for the third time, as is his wont, but it’s still basically Been’s song, re-appropriated by its Wright and Goldberg slathered the effects on Kerr’s vocals, but that’s fine with me. It’s all about the beat here, and the slight distance this affords the lead vocal works to keep him from dominating the track.

Right before the bridge, there is a snatch of what sounds like a bagpipe before Charlie Burchill looses some searing riffs that remind me of a description that I once read of The Skids music. The vibe of the songs were compared to the feeling of goals being scored, a sporting metaphor, but I get it. It certainly relates to the sound of this track. After the middle eight, where the rhythm is subdued for another round of Fender Rhodes piano, Jim Kerr delves into the final verse. Then the tribal drums return and hearing him sing “Here’s to the travelers on the open road, here’s to you wherever you are,” he sounds like he’s positively glowing with munificence.

The only thing that I don’t like about the track, is that in these, the end times, there are no glorious 12″ mixes from Simple Minds. This cover cries out for a nice, 8:30 extended version, and maybe a second remix 12″ while they were at it. That they finally made me love this cover version of a song that I never cared much for one way or another is a testament to their dogged determination to carry it through. According to Kerr, they pulled it out for the North American tour and by the time that they got back to the UK, they rushed into a studio to nail it down. Between the time that I saw them play it in October and maybe a month later, the new arrangement had been hit upon, and I must say that it makes all of the difference in the world in regards to this song.

The rhythm box that the intro to “Concrete + Cherry Blossom” was founded was strongly redolent of similar gambits used on “New Gold Dream” tracks like its title track or “King Is White + In The Crowd.” Then the song glides into cruiser mode; far more direct than those songs of yore. The vibe of the song returns to nostalgia and reflection as Kerr sings of the Toryglen projects of his childhood, which were planted with cherry trees whose blossoms were harbingers of the Spring.

In the way that it has a nostalgic core, it suggests that this might have been a Lostboy track at one point of another, but this was a Kerr/Burchill number. Clearly only Simple Minds DNA here. Some of the bass here might have been an actual bass guitar [as well as synth] but it is buried in the busy rhythmic filigree that fills the song’s margins. The middle eight was yet another instance of the DYFAM factor at play here, as Kerr’s vocals were all “la-las” before the piano that was buried throughout the song rose to prominence in the mix, letting the pure Steve Lillywhite sound of the piano on “Sparkle In The Rain” [much less U2’s “New Years Day”] come to the fore of the song. The end result is busy, but hooky and good to listen to.

The next song was another Kerr/Burchill number and “Imagination” was a vibrant track examining the creative process to a much stronger standard than “Big Music” had. Here was a song that sat comfortably on the same shelf as “Night Music.” This was a song which started its life as “Odyssey,” a Charlie Burchill instrumental. In keeping with the title, the entire song is constructed like a runaway train with the sequenced rhythms perfectly suggestive of the rhythm of fast moving train wheels, with his keening guitar sounding like far off whistles. Fat stacks of chorused synths contrasted with Burchill’s abstract tremolo guitar before the solo in the middle eight emanated unbridled energy.

This song was definitely a sleek mover and were I in charge, it would be picked for single material. The backing vocals in the outro from Clinton Outten, who serves most of these songs, were deep and haunting with excellent production from Wright + Goldberg. The recitation that Kerr gives in the end of the song was icing on the cake as it suggested that there was simply too much to fit in the song, leaving the singer to offer it as a brief taste before the train sped onto the next town.

Fans who had signed up to the Lostboy! mailing list five years earlier were certainly familiar with “Kill Or Cure,” which was song Kerr wrote with Paul Statham and offered as a free download after the Lostboy! album was released. It was a surprising inclusion “Big Music” in a completely new version which sacrificed the immediate appeal of the original [excellent] version for something more complex and intriguing. The first several times that I had heard this song, the awkward vocal dub hook that Wright + Goldberg concocted seemed to dissipate the song’s energy in a welter of confusion.

Kerr’s vocals were clearly more assured on this version, and Burchill added delicate tremolo and twang guitar licks that were indicative of where his head was at in this period. I can think of no prior period where I’ve heard as much tremolo from him. After a few listens, the awkward sounding dubbed out chorus becomes a stealth hook of greater value than any components of the original, more facile, version that were displaced in the new version. Then the song’s secret weapon manifested in the bridge where backing vocalist Sarah Brown was moved forward in the mix to exciting effect. She then carries the song home in the intro along with Charlie’s guitar.

Then it was time for another retread, this time of the previous year’s single “Broken Glass Park.” This was already a known quantity to me since they had opened their 2013 show I caught with it, but until I bought the band’s 2013 Record Store Day 12″ that featured it on the AA-Side, I had not heard the original mix of this song. It’s still an excellent number, but I’m afraid that I’ll have to give the nod to the “Celebrate” version of the song over the incarnation on “Big Music.” The descending synth hook on the original is catnip to my ears while the album version has the hook seriously diminished in the mix. Following that, it’s still an excellent song from the pen of Owen Parker with more Lostboy! nostalgia courtesy of Jim Kerr’s lyrics.

Finally, the album reached a dozen songs with the final tune, “Spirited Away.” Like the Lostboy! album, this was another Owen Parker song that was destined to end the album on a graceful note. With a sound similar to a marimba leading the melody on the gentle music bed, it didn’t sound like anything else in the Simple Minds canon. It proffered a quiet, subdued energy that gave Jim Kerr sufficient space to play his emotional cards close to his vest with an intimacy that serveed the song particularly well. When the music swelled up for the chorus to maybe as much as a seven on the memorial Nigel Tufnel amplifier pot, it almost threatened to break the spell of quietude that the rest of the song crafted, but the energy level wisely receded for the next verse.

The third verse differentiated itself [there’s no bridge here] with prominent synth bass that supplanted Ged Grimes bass guitar that figured elsewhere. The washes of [more] tremolo guitar from Charlie Burchill following this, sounded like Burchill had been thinking of fellow Scot Robin Guthrie since he was operating in a similar territory. When the song climaxed after some haunting backing vocals, everything pulls back dramatically, to allow Kerr to have the last word on this superb closer. The end result was a song that showed that Simple Minds have certainly learned that there’s strength in subtlety. I’m not a fan of Simple Minds for the emotional content of their music. I am continually drawn to the abstract compositional [and lyrical] component of their early years as their raison d’être. Such as that is, when given a tune that packs this much of an emotional wallop without descending into heavy handed mawkishness, I can only strongly applaud the results. This was a fantastic song by any measure. One which has resulted in several occasions of repeat play for these ears. With that, the album proper had ended, but since I opted for the deluxe edition, you know that there will be one more “side” of tunes to follow before we wrap up this epic adventure with a final survey of all we’ve heard.