Posted on February 5, 2015 by postpunkmonk

Simple Minds | Our Secrets Are The Same – 0.5
[continued from previous post]

“Neon Cowboys” brought other bands to mind than Simple Minds. Cowboy Junkies, anyone? After a half bar of acoustic guitar Jim Kerr heaved a heavy sigh, perfectly echoing the sense of futility and dread which accompanied my playback of this “lost” Simple Minds album. I certainly had not been searching for it! The plodding rhythm loop was typical of the downcast and sloppy vibe most of these new songs were burdened with. To listen to this track is to metaphorically feel the wind sucked from one’s sails as one is left adrift on a calm, dead sea of song.

“She Knows” began with trip hop/lounge intro samples that recalled the early 90s to quickly recede; leaving a lazy acoustic number with more drug metaphors insinuating themselves into the lyrics. The track almost functioned as intimate listening, if a bit dated with the trip hop references sitting awkwardly in what was basically an “open mike night” style acoustic singer-songwriter song. Far from what I require from this band, who embodied the forward thinking aspect of 1970s music. This, instead, sounded like some anonymous track from 1971.

“Hello” began with more funky loops and fuzz bass once again that presaged their next album, 2001’s “Neon Lights.” The addition of strings and one of Charlie Burchill’s best solos on this album buoyed the cut more than anything I’d heard since track two. The song ultimately lost me though, when Kerr’s singing defaulted effortlessly into Bono falsetto territory on the song’s coda, betraying his own worst tendencies even while clearly making an attempt to escape from the Simple Minds box which had completely lost its usual commercial luster by this time.

“I never want to be that proud.
Nothing much to say.
I’d rather turn the thing around and take a chance to drift,
Drift away.” – Hello

Next came “Happy is The Man,” a Mark Kerr-penned track from the Sly Silver Sly songbook; commandeered by a big brother who should have known far better. This was clearly the worst song I’d ever heard with the name Simple Minds attached to it! It sported absolutely horrific vocal harmonies/lead vocals – like a smacked-out Bono duetting with himself and utterly convinced of his godlike invulnerability! There’s nary a repulsive vocal technique unexplored in this, the absolute nadir of Simple Minds’ long career.

Just when one thinks that it can’t get any worse, the singers push the envelope of repugnance to twist the sonic blunt knife ever deeper in my spleen! I am going to give Kerr the benefit of the doubt here and assume that he was dis-harmonizing with Kevin Hunter, and not a second recording of himself. It’s not the first time on this misbegotten album that one could be forgiven for not knowing Kerr was singing. It’s hard to believe that this band were once speed freaks, but those days sounded far better than the nod-fest I was hearing here! Unbearable!!

“It came over me again I said, I said.
To see you eyeing around.
Lullaby high.

Lullaby high.
And he makes no sense at all.” – Happy Is The Man

A plodding rhythm box and acoustic slide guitar sounds like Simple Minds Hell to these ears! “Sleeping” was the worst possible ending to this complete bummer of an album by a once-favorite band who were, once again, making the worst possible music that I could imagine them recording. The big difference was, instead of selling in platinum amounts to my consternation, this album had been rejected by Chrysalis Records, and resulted in the band being dismissed from the label. Sometimes, the big, bad labels get it right.

“Sometimes I reach out,
At the wrong kind of things.
Sometimes I’m ripped on the floor,
My indignation means I can’t do a thing,
My sins to stay underground.” – Sleeping

When I heard this as disc five in the [better missed] “Silver Box” boxed set that Virgin Records released to commemorate 25 years of Simple Minds in 2004, I was very glad that I had resisted the temptation to parlay my hard earned pittance on any of the ubiquitous bootleg CD-Rs of this for sale on the web for the past few years. I can completely understand why Chrysalis were loathe to release this. If I were Chrysalis, I wouldn’t have released this either!

It is almost impossible to think how this managed to happen; a musical worst-case scenario that begs a little historical background for the young possibly stumbling across these words. It’s important to paint a picture of the various youth cults surrounding the musicians responsible for this misfire of galactic proportions. As the seventies turned into the eighties, the UK wave of New Wave and Post-Punk largely shifted towards a synthetic, guitar-free paradigm of music that was seen as being forward thinking in rejecting the soft cliches and rock star hubris of What Had Come Before.

Bands like Simple Minds looked to Bowie/Roxy/Lou Reed as inspiration, and then drew upon other influences, such a Krautrock, which even became a touchstone in Bowie’s most adventurous work. It might be pointed out that in spite of his privileged rock star icon status that Bowie that utterly escaped the wholesale rejection in the cleansing fires of the punk rock explosion that claimed the critical reputations of many a 70s rock icon. 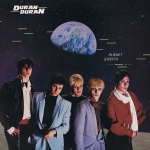 This predominance of synthetic music by 1981, made bands like the Human League look like the forward thinking UK visionaries that they were and eventually, bands of this stripe even managed to make inroads into the notoriously conservative airwaves of America after a fashion. This largely came down to MTV, and it’s emphasis on bands with ready visuals. Bands with a British Art School background. Bands comprised of nancy boys who rejected guitars! Even if they also had guitarists, and appetites for coke and supermodels that were every bit as insatiable as Rod Stewart’s.

As is often the case, there was a backlash by red-blooded Americans who reactively embraced retrograde guitar sounds in the early 80s. This led to the US West Coast discovering, five years too late, the joys of punk rock, which they mutated into the hardcore scene. It also led to the upsurge of guitar-based “jangle” bands and the development of the “college rock” sound of bands as spearheaded, but by no means originated by bands like R.E.M., who looked back to groups like The Byrds to differentiate themselves from the perceived encroachment of “inauthentic” UK synthpop bands. Ironically, R.E.M. were led by a gay, Art School student.

Ultimately, the latter camp was where Kevin Hunter had emerged from as the leader of Wire Train. They were a janglefolk band of the crowd that R.E.M. typified. They looked back about 15 years to embrace West Coast Rock of the post-psych, singer-songwriter variety. Now he found himself rubbing shoulders with a band that once typified the acme of Post-Punk art rock, even though the band members had all been working class street kids who never spent a day in Art School. What was significant, was that large chunks of their core audience [including me] had done exactly that!

Simple Minds had built up their initial audience, the one that carried them to the cusp of popularity, by appealing to an audience of Art School students and clubbers who thrilled to their synthesis of various progressive musical threads, only to cut their roots loose once they obtained a mass audience. Now that they had lost even that, the band were flailing desperately by daring to embrace their musical antithesis at their lowest possible ebb. It was a case of sleeping with the enemy, and it reeked of the worst judgement in the most desperate of situations.

This was ultimately, an infuriating Kevin Hunter album with Jim + Charlie slumming for support. The stinging irony was that a few years later, due to the bonds forged in this project, Kevin Hunter found himself singing on an Italian House 12″ single mixed by the DJs Phunk Investigation, who will figure in the next few steps in the Simple Minds saga. The substitution of Mark Kerr and a plethora of cheap, nasty sounding percussion loops instead of Mel Gaynor [and the money he normally commanded as a session pro – he was playing for Robert Palmer during this period] was undoubtedly budget driven. There was little here to encourage re-listening, and hearing it now for this Rock GPA has seen me listen to this more than I ever did in the 11 years I’ve owned “Silver Box,” much to my annoyance. This is another album that makes me angry as it plays out; leaving my mood fairly dark at its end! This Monk deems this non-canonical!

Next: …Oblivion or bust