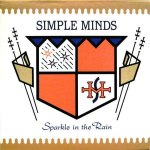 Simple Minds | Sparkle In The Rain – 4

Following on the commercial breakthrough of “New Gold Dream [81, 82, 83, 84],” Simple Minds found themselves moving up in the world. The end of their previous “Sons + Fascination” world tour saw the band invited to European festivals for the first time and the 1982 “New Gold Dream” tour followed suit. The experience of playing for thousands of people in the open air had a galvanizing effect of the formerly effete art rockers. Their earlier phase of claustrophobic, paranoid trance grooves were somehow inappropriate for festival settings. The artistic mood shift that resulted in the expansive positivity of “New Gold Dream [81, 82, 83, 84]” moved the band far closer to the direction that would be most congruent with these large shows. Somewhere along the way, the notion arose that it would be great if they had a number that could really pop in such a setting.

From those seeds arose “Waterfront.” The band maintain that once they set out to play to the vastly different vibe that festivals offered, that they were able to hammer the song into shape from its humble beginnings fairly quickly. It made its debut in their set in August 1983 at the Phoenix Festival in Ireland as the invited guests of headliners… U2. The two bands had met earlier and had formed a mutual admiration society. Simple Minds had been gunning to have Steve Lillywhite produce one of their albums ever since the decision had been made to try someone different from John Leckie. Undoubtedly, his helping of the standard-bearing third Peter Gabriel album that turned countless heads [including this one] was what initially brought Lily-white to their attention, but his cost, among other factors, led to his name being rejected by Virgin early on.

After “New Gold Dream [81, 82, 83, 84]” peaked in the UK LP charts, Virgin relented on the budget, or Lillywhite’s schedule synched with the band. Possibly both. In September of ’83, the band and Lily-white began cutting demos. Another difference this time was that new drummer Mel Gaynor was in place as the last album had seen a revolving door with three drummers coming and going. Gaynor was the last one on the drum stool and he found favor with the band on their previous tour. His muscular, more conventional rock drum sound would undoubtedly color the proceedings as well. In November of 1983, the pre-release single, “Waterfront,” hit the stores.

I’ll never forget the first time I heard this single. A friend and I were in Murmur Records and I was looking for the 12″ on import. There had been a single copy in the store, but it had been pull for someone else who was coming in to purchase it. That, of course, didn’t stop the proprietor, Don Gilliland, from playing it for us to hear. The dramatic shift in tone was not quite what I had expected having listened thus far to only the previous Simple Minds album. I remarked to Don that “this sort of sounds like U2,” to which he remarked “…yeah.”

By that time in 1983, U2’s star was definitely on the rise. With the commercial breakthrough of their “War” album, I had managed to finally hear the band after only reading about them for what seemed like two years. It was hard to turn on MTV and miss the videos for “New Year’s Day” or, to a lesser extent, “Two Hearts Beat As One.” I was previously cold to U2 due to interviews I had read with the band around the time of their “October” album. I really didn’t like where they were coming from. I didn’t like how they were flaunting their Christianity at all, and by the time I actually heard their music, it wasn’t so good as to cause me cognitive dissonance. In particular, I disliked Bono’s phrasing. I wrote them off early on and over the years, the more I learned about them, [actually just Bono and The Edge – you never see or hear the other two guys] the lower my opinion of them has sunk. I have never heard a note from their first album, even now.

With Lillywhite providing his patented sound of the minute [as heard on U2’s “War” and Big Country’s “The Crossing”] it’s no wonder that I was not decisively moved by the extended 12” mix the first time that I had heard it. While I didn’t like U2 for personal reasons, I didn’t care for Big Country for musical ones. I couldn’t get past the strained vocals of Stuart Adamson so any exploration of Big Country was doomed to fail. Now Simple Minds were moving in these circles, and I didn’t know what to think. Having only had “Sweat In Bullet” and the previous album in the Record Cell, any decisive thoughts would have to wait until I heard the record in my home.

My friend Jayne obtained the record earlier than I did, since she worked part time in Record City Casselberry at the time. I recall her playing me “Up On The Catwalk” over the phone [not an optimal experience] and sharing her impressions of the album as we were both big fans of “New Gold Dream [81, 82, 83, 84].” It was shortly after that when I bought a copy of the album on my next visit to a record store. I was pleased to see that it was the same low $6.98 list price as their last album on A+M Records had been, and we’ll continue on that note tomorrow.

Next: …Dollars and Deutschmarks